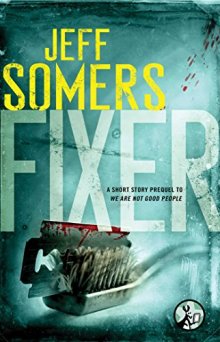 Join Jeff for the release of his novella, Fixer.

A prequel story to We Are Not Good People, the gritty new supernatural thriller from master storyteller Jeff Somers. Enter the hidden world of blood mages—and their victims.

The underground few who practice blood magic—casting with a swipe of the blade and a few secretive Words—are not good people. Lem and Mags live in this world, and they try to be good, try to skate by on Cantrips and charms and scratch out a meager existence without harming anyone…much. But when a massive debt forces Lem into the role of Fixer, he’ll learn exactly what down and out really means.

This ebook story also contains an excerpt of the forthcoming We Are Not Good People, out June 3, 2014.

It should have worked. It did work, right up until it didn’t.

“You got your trained bear on a leash, Vonnegan?”

I looked up and stared at Heller, his shaved head flaking into drifts of off-white skin that settled on the shoulders of his black fur coat. The big oversized sunglasses were studded with rhinestones, some of which had fallen off. He looked like he probably smelled, but I wasn’t going to test the theory. He didn’t appear to be wearing a shirt under the coat, though I was fucking relieved to see pants emerging from under its hem. Two kids, Asian and skinny and smoking cigarettes, stood on either side of him. Heller didn’t go for muscle. Heller went for speed.

Next to me, I heard Mags literally growling. I reached up and put a hand on his shoulder. I was slowly starting to realize that Mags had somehow bonded to me in unholy matrimony, and I was beginning to make long-term life plans that involved him.

I took a deep breath. “Listen—”

Heller held up a hand. “Save the bullshit, Vonnegan. You owe me thirty thousand fucking dollars, and you told me you’d have it tonight.”

I leaned back in my chair and let my hand slip off Mags’s shoulder. I decided that if the big guy went nuts and killed Heller by accident, I would allow it. Around us, Rue’s Morgue flowed and buzzed, populated by a big group of slummers from uptown who’d somehow found the bar. The extra humidity and noise was straining the environment beyond its capabilities, and everything had become smoky and dense, the air getting thicker as more drinks were poured.

I’d never had much energy for bullshit. When I started a lie, it got heavier and heavier until I couldn’t hold it up anymore. So I just went for brutal honesty.

I pictured the ustari who’d brought me to this state, her and her lone Bleeder. She was a bottom dweller, going after her own kind. And that meant I wasn’t even a bottom dweller. I was fucking underground.

Heller smiled. His teeth were little green pebbles in his mouth, and I didn’t like looking at them, but I forced myself to smile back. We were equals, I told myself. I’d had ten years of apprenticeship that had gotten me nowhere, and a lot of the . . . people, the magicians, who hung out at Rue’s were way ahead of me, but I was learning fast. Heller acted like he was some sort of fucking Lord of the Shitheads, and I told myself that was an illegitimate position: No one had elected him.

“I don’t give a fuck what worked out or didn’t work out: You owe me fucking money and you don’t have it.” He nodded, once, as if coming to a sudden decision. “Go touch your fucking gasam for it, right? Enough screwin’ around.”

Thinking of Hiram and his hot, musty apartment and his tendency to believe that verbal abuse was a fine motivator, I shook my head. Gasam had been one of the first Words I’d learned: teacher, Master. The implied bondage in the Word hadn’t sat well with me. That should have been a sign it was all going to hell sooner rather than later.

I shot my cuffs and thought. Anything to not have to crawl back to that fat little thief and beg him for help. Anything. In service to the grift, I’d even tried to improve my look by investing in a fifteen-dollar suit from St. Mary’s thrift store; it fit like it had been made for show and possibly out of cardboard. But thirty thousand dollars, I’d recently discovered, was a lot more money than I’d thought. It was turning into an impossible amount of money.

Keeping my smile in place, I shook my head and pursed my lips. “Isn’t come to that yet, Heller,” I said. “Give me a couple more days.”

Heller’s smile widened and he gestured, vaguely, in the air, with one hand. Rings glinted on his wiry fingers. I had a second of anxiety, then the weird sense of blood in the air. Then I was being pushed down into my chair by an invisible force, so hard I couldn’t breathe.

“I could Charm ya out of it,” Heller said, stepping over to take hold of an empty chair and dropping it next to me. I could move my eyes but nothing else. Someone behind me, casting spells.

It should have worked. It did work. Until it didn’t.

He currently lives in Hoboken, NJ, with his lovely wife Danette and their plump, imperious cats Pierre, Oliver, Spartacus, Otto, and Coco. Jeff insists the cats would be delicious.

In-between all this and writing too, Jeff plays chess and staves off despair with cocktails.