Five Things I Learned in College

I am proud to say that I graduated from the Ohio State University, and, yes, I learned many things, some of them in the classroom. I majored in East Asian History, but I minored in French—and life.  What are some things I learned?

I'm currently working on a Children of Empire, a series set in the 1830s, when the British Empire was approaching its zenith.

Three cousins, who grew up together in the English countryside, are driven apart by deceit and lies. (You may guess a woman is involved!) Though they all escape to the outposts of The British Empire, they all make their way home to England, facing their demons while finding love and the support of women of character and backbone. They are:

Book 3, The Unexpected Wife, will be released on July 25.

Set in China, Caroline finally gets to use that degree in East Asian History.

Charles Wheatly, Duke of Murnane, doesn’t expect to find his great love when he accepts an unofficial fact finding mission to Canton on behalf of the queen. He certainly doesn’t expect to confront his wreck of a marriage in such an exotic locale. Zambak Hayden follows her brother to China to escape pressure to make a suitable marriage. She finds the brother drawn into the world of greed, smuggling, drugs, and corruption and resolves to both sort out the truth and protect her brother from becoming prey to all of it—if only she could stop yearning for the one man she can’t have.

Caroline Warfield’s passions are faith, family, history and travel and all four drive her stories. She writes historical romance set in the Regency, Late Georgian, and Victorian eras. She is currently working on a Children of Empire, a series set in the 1830s, when the British Empire was approaching its zenith. 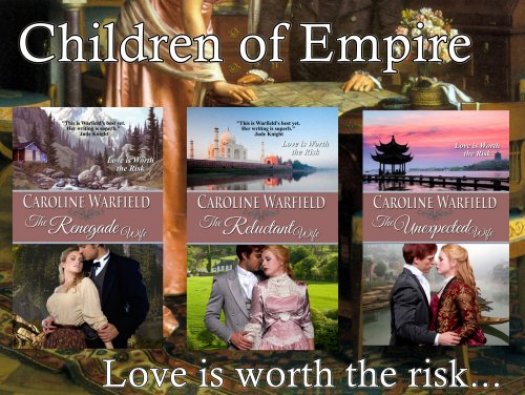