Road Trip: Are We Missing Someone?

My husband and I had a carefully orchestrated plan for the first week of October. We had to be in Panguitch, Utah for the National Senior Pro Rodeo Finals by Tuesday night, but we couldn’t leave until we finished pregnancy testing the cows on Monday. Late Sunday afternoon we brought the herd in close to the corrals in preparation and got the rodeo rig packed up and ready to roll the minute the chute gate slammed behind the last cow.

At seven-thirty Sunday night we got the call that the vet had cancelled due to an impending blizzard. What? When we’d checked the forecast at noon it was only a few inches of snow (no, that’s not a shock in northern Montana on the first of October). Dang. There it was, we were now under a winter storm warning, scheduled to hit in the wee hours and dip south nearly to the Wyoming border.

At nine-thirty p.m, when I’m usually climbing into my jammies, we were loading the horses and heading south. Greg’s bad knee was killing him from all the mad scrambling, so I took the wheel and he crawled into the living quarters of the trailer where he could stretch out.

Fast forward three hours. I fueled up at a truck stop, went inside to use the restroom, then grabbed a snack and a hot drink. I was about to pull out when it occurred to me that I should check to be sure Greg hadn’t also gone inside the store when I wasn’t looking. After all, he wouldn’t have been the first member of our family to be left at a gas station.

It’s always the bathroom that gets you. Growing up, our family of six plus at least one dog rodeoed in a Winnebago, pulling a four-horse trailer. One weekend, somewhere in southern Alberta, my mother was driving while my dad took a nap in the rear. As she climbed into the driver’s seat after a fuel stop, she spotted the empty bed.

“Where’s your dad?” she asked.

“In the bathroom,” my younger brother replied, barely glancing up from his book.

Assuming he meant the bathroom inside the RV, she fired it up and pulled out. My brother went on reading without comment. Luckily, a block down the street she glanced in the rearview mirror and caught a glimpse of my dad running behind us, yelling and waving his arms. Given my brother’s lack of concern, we’re all sort of amazed he hasn’t left any of his four kids or his wife at a rest area, but I suppose a few tours in Afghanistan teaches a man to keep track of his fellow travelers.

Every rodeo family has a similar story, but my all-time favorite is one I heard from a college friend. We grew up in the Stone Age, when everyone had a camper on the back of their pickup and no one thought twice about stuffing all the kids in there so they didn’t have to hear, “Are we there yet?” On this particular day, his mother had left him and his brother to duke it out in the front, thereby keeping his dad wide-awake while she rode in blissful solitude in the camper. They made the usual gas stop, then piled in and took off. They were five miles down the road before his dad realized something was wrong.

Arriving back at the service station, they found his mother fuming beside the pump. Considering she was already in a temper, no one had the nerve to tell her they’d only turned around because they’d forgotten the gas cap.

After her life comes crashing down, Melanie Brookman is determined to claw her way back up again—and this time, she won't make the same mistakes twice. So when her friend sends Wyatt Darrington to help, Melanie keeps him at arm's length. He's exactly the sort of trouble she doesn't need.

Wyatt has the perfect distraction for Melanie: rescue his failing bar. She reluctantly agrees and together they hit the road. As they spend more time with one another, undeniable attraction grows. But Wyatt knows that if she ever found out his closely guarded secret, any chance at happily ever after would be left in the dust...

This giveaway is now over. The winner has been posted in the comments.

Kari Lynn Dell is a native of north central Montana, a third generation ranch-raised cowgirl, horse trainer and rodeo competitor, most recently the 2013 Canadian Senior Pro Rodeo Association Breakaway Roping Champion. She attended her first rodeo at two weeks old and has existed in a state of horse-induced poverty ever since. She currently resides on the family ranch on the Blackfeet Reservation, loitering in her parents’ bunkhouse along with her husband, son and Max the Cowdog, with a tipi on the front step, a view of Glacier National Park from her writing desk and Canada within spitting distance.

Come visit at KariLynnDell.com, hear what's next on the publication front, learn firsthand about ranch life on the east slope of Rockies and laugh with us at the tales of woe and wonder that come with living on the northern frontier. Really, someone should be filming this stuff. Occasionally, we do. 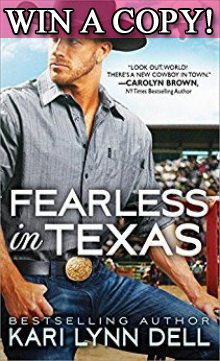