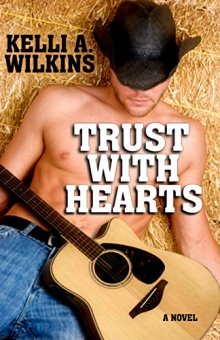 Today I’m sharing an exclusive excerpt from my contemporary romance novel, Trust with Hearts. The hero is a sexy cowboy-like country music singer who gets involved with a young woman trying to put her life together after a bad break-up.

After a bitter breakup, Sherrie Parker seeks refuge at her cousin Dave’s house in rural West Virginia. Early one morning, she runs into Dave’s other houseguest, a singer named Curtis Taylor. The last thing Sherrie wants is to share living quarters with a country music crooner – even if he is sexy, in a cowboy sort of way.

Thrown together by circumstances, Sherrie and Curtis get off to a rocky start, but soon discover they have more in common than they ever imagined. Unable to fight their growing attraction, they give in to their desires and start a sizzling summer romance.

Everything is perfect between them until Sherrie discovers that Curtis is keeping secrets from her – and his biggest secret of all will change everything. Can their newfound love survive, or will destiny keep them apart forever?

Sherrie climbed into Dave’s red pickup truck and settled herself in the middle of the bench seat. Her sweaty legs instantly stuck to the leather. It was only ten o’clock, and the temperature was already in the nineties.

She didn’t want to go to town, but it was better than sitting around the house and getting into another argument with Curtis. Why did he always say exactly the wrong thing to her? Maybe she was too sensitive, or maybe he was trying to annoy her on purpose.

Curtis hopped onto the seat next to her, and his jeaned leg brushed against her thigh. An electric ripple zapped through her body, and her pulse surged as a breeze carried a spicy sandalwood scent to her nostrils. She breathed in, savoring the fragrance. Curtis might act obnoxious at times, but he sure smelled good.

His question broke her from her thoughts. How could someone so thin have such a deep voice? “I’m fine.”

“Okay.” He slammed the door shut, forcing their shoulders closer together.

She focused her attention on the dashboard and tried to ignore her thundering heart. Why did she feel so flushed all of a sudden?

Curtis shifted his weight toward her as he maneuvered the seat belt strap across his shoulder. He was practically leaning in her lap, and she used the opportunity to peek under his hat and study him up close.

Curtis had a slight bit of scruff on his lean jaw, and his wavy, sand-colored hair hung to his collar. She avoided looking into his hypnotic blue eyes. Yesterday, she had become speechless when he’d turned them on her. Those eyes could bore into her soul and strip her naked. As he latched the seat belt, his hand touched her thigh, and a flash of heat coursed through her. She swallowed hard and closed her eyes.

“How about some music?” Dave asked as he backed out of the driveway. He switched on the radio and a country song blared from the speakers.

“I don’t wanna start another argument, but what have you got against country music?” Curtis asked.

“It’s all twangy banjos and tortured violins. It’s music to cry by. Who wants to hear miserable depressed fools pining over someone who never really loved them?” She fell silent as she realized she had just described her life in one sentence. “I’d rather listen to dueling chainsaws than sad songs in spurs.”

Dave drove onto an unmarked gravel road. “You’d better get used to it, Sher. All the stations down here are country, except for the oldies and the Christian Rock stations.”

“Put on the oldies. At least I can listen to Elvis.”

A man singing about a train warbled from the radio and she lowered the volume. “Please Dave, I’ll lose my mind.” She looked at Curtis. “I hardly think Elvis would be considered country. Just because he was born down here—”

“And got started in gospel and bluegrass and sang for the Opry in 1954. No, not him.” Curtis adjusted his cowboy hat. “He only had eighty singles on the country charts and was inducted into the Country Music Hall of Fame. But he was nowhere’s near country,” he said with a smirk.

“He’s got ya there, Sher,” Dave said. “If I were you, I wouldn’t go up against him in the music department. He’s a bit of an expert.”

“Whatever.” She knew when she was defeated, and she didn’t feel like sparring with Curtis again. He might smell good, but something about him drove her crazy.

She took in the scenery as Dave drove down unmarked roads. There were no sidewalks or streetlights, and they didn’t pass another car or a gas station. But what did she expect? Bluemont was a small town, even by Southern standards.

“This is Johnson’s Road. It’s the main road that leads to town. You take it to go anywhere, like the store, the gas station, or over to Reilly’s Junction or Fitchburg,” Dave said.

All of a sudden, Curtis leaned across her lap and cranked up the radio. She was pinned against the back of the seat with most of Curtis’s weight crushing her breasts. Her body throbbed as she caught a strong whiff of his cologne.

“Do you mind?” she shouted above the fast guitar solo.

“That’s CJ’s latest single.” Curtis locked his gaze onto hers as he slowly slid his weight off her chest.

She closed her eyes and leaned forward as another rush of heat filled her. This time, she recognized the feeling for what it was—desire. No, this could not be happening. Curtis was not turning her on—it was the circumstances. The close quarters of the truck, the heat, and that enticing cologne would get to anyone, right?

“You ever hear of CJ Tyler?” Curtis asked, his deep voice rumbling close to her ear.

She opened her eyes and saw Curtis staring at her. He hadn’t sat all the way back in the seat. He was still close enough to kiss her, if he wanted to. Did he know what he was doing to her? For some reason, she got the impression that he was teasing her on purpose.

“Just checking. That’s what I thought.” Curtis grinned and leaned back in the seat, breaking the connection between them.

“Nothing,” he said, chuckling. “This sure is gonna be one hell of a summer.”

Order your copy of Trust with Hearts here:

The book was a lot of fun to write, and I hope you enjoy reading about Curtis and Sherrie’s spicy romance. I welcome comments and questions from readers, so feel free to contact me via my website, blog, or social media.