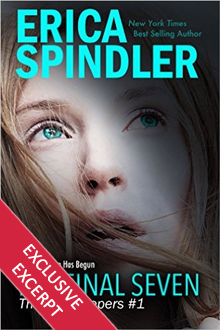 Ready for a bit of suspense? Erica has provided us with an exclusive excerpt from her book The Final Seven. this is the first in a new series.

The Final Seven - The Lightkeepers, #1

The first Saturday in July. . .

The number seven carved into her door . . .

The countdown has begun.

New Orleans Detective Micki Dee Dare is a seasoned, no-nonsense cop. She doesn't need a partner, especially not Zach “Hollywood” Harris, an irreverent charmer, fresh out of an experimental FBI program. And her assignment — keep him alive while he fights crime using the special skills he brings to the table — is not what she signed up for. But the die has been cast and there's nothing she can do about it.

Micki soon realizes there's more to her partner than meets the eye—and more at stake than catching bad guys and closing cases.  There’s a new kind of evil at work the Crescent City, more cunning, more powerful than any she’s ever encountered.  And she and Zach may be the only ones who can stop it.

As another coed goes missing and the darkness closes in, Micki must face a terrifying truth: this time she might not make it. This time the evil they’re facing might destroy them all . . .

Full of surprise twists and unexpected turns, The Final Seven is a heart-pounding thriller that will keep you on the edge of your seat until the very last page.

From: Chapter Six, THE FINAL SEVEN by Erica Spindler

The crime scene techs arrived. Micki had worked with all of them before, but none more than Ben and she crossed to him. “Welcome to my party.”

She laughed. “Tell me about it. Vic was a small-time drug dealer. Thinking it probably got him killed. Bullet casing,” she said, pointing it out. “Bullet exited the skull. With a little luck we’ll retrieve that, too.”

They started toward the body. “No sign of his cell phone yet. Be on the lookout for it—”

Micki stopped, realizing that Zach was gone. She looked around, frowning. “Yo,” she called, “anybody see where my partner went?”

The only female on the tech team answered, pointing toward the sidewalk behind her. “The hot one? He went that way.”

Micki finished up with Ben and hurried in the direction the tech had indicated. She reached the sidewalk and stopped, scanning right then left. She caught sight of him two blocks down.

What the hell was he doing?

Micki started after him at a run. She didn’t know which was worse: leaving a scene before it was processed or letting Boy Wonder out of her sight. Either way, Major Nichols would have her head.

“Hollywood!” she shouted when she thought he could hear. “Wait!”

He stopped and turned. July in New Orleans was not a prime time for running; when she reached him she was sweating and out of breath. “What the hell, dude? Where do you think you’re going?”

“You can’t— The crime scene’s that way.” She jerked her thumb in the direction they’d come. “We’re not done there.”

She grabbed his arm, stopping him. “We’re in charge of a murder investigation. The very first thing we do is secure and process the scene. We can’t just . . . wander off.”

He opened his hand. A hotel room key. One of those cards with the magnetic strip.

He’s crazy. Off his fuckin’ nut. “It’s worthless now. Contaminated. FBI didn’t teach you anything about evidence and chain of custody?”

“Of course. But in this case, that’s inconsequential.”

It took her a moment to swallow that one. “You’re dangerous, you know that?”

“We’ll find what we’re looking for at the French Quarter Inn. That’s where I’m going.”

He started off. She hurried after him. “Find what? The killer?”

The Bureau didn’t have to worry about some gangbanger taking him out, she was going to do it herself.

She grabbed his arm, stopping him. “Police work’s not just about following hunches. The investigative process is meticulous, logical.”

He seemed not to hear her, and she went on. “You may be a high-powered channel to Freaksville, but we’ll need evidence to get a conviction. And if you expect me to save your ass, you need to play by my rules.”

She sucked in a sharp breath. “No.”

“Too bad. Because I really need you to shut up now.”

Erica Spindler is the New York Times and International Chart bestselling author of thirty-two novels and three eNovellas. Published in twenty-five countries, she has been called the “The Master of Addictive Suspense” and “Queen of the Romantic Thriller.”

The Lightkeepers is Erica’s first series, something she’s wanted to do for years. All she was waiting for was the right characters.  She found them in Micki Dee Dare, reformed southern belle turned kick ass cop, and Zach “Hollywood” Harris, a charming bad boy with some very cool, save-the-world skills.

Erica splits her writing time between her New Orleans area home, her favorite coffeeshop, and a lakeside writing retreat. She’s married to her college sweetheart, has two sons and the constant companionship of Roxie, the wonder retriever.

Erica is currently at home in New Orleans, writing Micki and Zach’s next adventure, TRIPLE SIX.