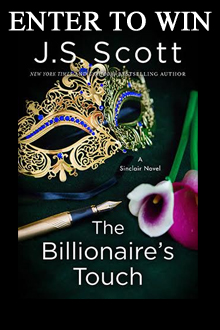 The Billionaire's Touch - The Sinclairs, #3

After a troubling childhood, wealthy Evan Sinclair likes his life orderly and controlled. He rarely gives in to spontaneous urges—until he begins a chance correspondence with a mystery woman who sounds like his complete opposite. She intrigues and amuses him, and the interest seems mutual…which is more than he can say for his current obsession, Miranda Tyler, the tough-as-nails, sexy schoolteacher who’s made it clear she’s not impressed—or interested.

Miranda finally has it all: a good job, friends, and the security of living in the quaint coastal town of Amesport, Maine. She even has an anonymous pen pal—a man she’s never met yet has bonded with almost effortlessly. The only thing unsettling her life is Evan Sinclair. The handsome billionaire is arrogant, pompous, and far too used to getting his way. Miranda tries her best to avoid him, until Evan’s steamy kiss turns her world upside down.

Soon their red-hot desire is scorching the sheets and has them both spinning out of control. But when secrets are revealed, will their insatiable attraction keep them together or force them apart? In J.S. Scott’s The Billionaire’s Touch, the eldest Sinclair just might have met his match.

Evan stepped forward without debating his options first, pinned Randi's body against her vehicle, and without a cautionary thought in his head, he kissed her.

He groaned as his lips crashed down on hers, knowing that he’d just made a mistake that would probably cost him his sanity. Her body stiffened as he wrapped his arms around her, one hand threading through her hair to protect her head and keep it exactly in a position that allowed him complete access to her mouth. An unfamiliar sense of male satisfaction moved deep in his gut as the clip holding her hair fell to the ground and the dark strands tumbled around her shoulders.

She tasted like chocolate and coffee, and Evan savored the delectable softness of her lips beneath his. Out of control, he demanded access instead of asking. Finally, she became pliant beneath him, letting him in, and he inwardly released a sigh of relief as she wrapped her arms around him and met his marauding tongue stroke for stroke. Evan felt himself drowning in sensation, and it definitely wasn’t the cold of the surrounding environment. Every instinct he had was to claim the woman in his arms, make sure she remembered the heat that raged between them as they kissed each other like they were ravenous for each other. His cock strained for release as Evan explored Randi’s mouth demandingly, his body overheating from the way she returned his embrace enthusiastically.

She was panting by the time he finally lifted his head, both of them desperate for air. It took Evan a few minutes before he could manage to release her. He continued to hold her in his arms, saying nothing, their heavy, ragged breathing the only sound he could identify, the cloudy spirals of their every breath visible in the frigid air around them the only thing he could see. Slowly, reluctantly, his hand untangled from her silky hair and he finally stepped back.

“We can pretend that never happened,” Randi squeaked in a panicked voice.

“I’m not certain I can,” he confided gruffly.

“We can,” Randi chattered optimistically. “We can’t stand each other. It’s just some crazy physical thing.”

It was definitely physical, but it wasn’t crazy or random. He’d wanted Randi Tyler with an unidentifiable primitive instinct he couldn’t explain since the moment they’d met, and he had a feeling that impulse wasn’t going to go away. Not after he’d tasted her, felt her willing response. She wanted him, and knowing that changed the entire game they’d been playing since the first time he saw her.

“Do you have an escort for Hope’s party?” He ignored her suggestion that they pretend he’d never touched her. He had kissed her . . . and they had both enjoyed it.

“You’ll go with me,” he decided, pulling his cell phone out of his pocket and handing it to her. “Call your phone so you have my number. Call me when you get home safely.” He didn’t like the way the wind was starting to kick up and the snow was coming down more steadily now.

She looked dazed as she dialed her own phone number, letting it ring in her purse so his number would show up before handing it back to him. “Evan, I don’t think—”

He put a finger over her lips. “Don’t think about it. Just go with me.”

She nodded slowly as though she was still in a pleasure-induced trance. Evan decided he liked that look on her.

Turning and walking away from her took almost superhuman strength, but he did it anyway. He wasn’t giving her a chance to think, a chance to change her mind.

He ambled slowly toward his car, satisfied when he saw her vehicle plow through the snowy parking lot and exit the Center.

What in the hell just happened?

Evan picked up his pace after he saw the taillights of Randi’s car disappear into the night, still more than a little shocked at his own behavior. He didn’t give in to urges or impulses, but tonight . . . he had.

This contest is sponsored by Night Owl Reviews.