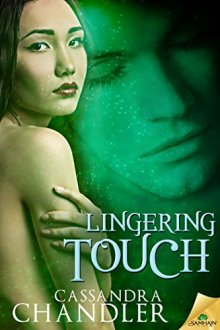 The memory of his touch has never left her heart…or her body.

Finn Connelly can see the past by touching objects, even read people’s thoughts. This power allows him to be the best private investigator in Summer Park. Until his abilities spiral out of control, leaving his thoughts and emotions inextricably entangled with those of others.

The only one who can help him regain control is the last person he trusts. Jazz Zhou, the woman who broke his heart.

Jazz is still reeling from nearly losing her closest friends to a serial killer—a man she brought into their lives. When she learns Finn is psychically bound to the ghost of one of the killer’s victims, she grabs the chance to atone for past mistakes.

As their investigation takes them to the killer’s hometown, they realize the threat to Jazz’s friends isn’t over—and neither is their relationship. But the more Finn uses his powers, the more he loses himself. And soon even Jazz’s touch might not be enough to help him claw his way out of a murderer’s memories.

Warning: Contains a heroine with a take-no-prisoners attitude and a hunky private eye with a touch that will leave you begging for more. And alligators. Lots of alligators.

The house looked ordinary. Finn could hardly believe so many terrible things had happened inside. At the same time, he could feel a chilling energy creeping out from it, even from inside the SUV. Jazz had her door open already, letting in the muggy night air.

“You ready for this?” Jazz asked.

“Yeah. I think so.” He reached for her hand on instinct. Having her near him... Well, he wasn’t sure how well he’d be coping without her.

She pulled away. It was standard procedure for her, but every time it felt like she kicked him in the chest.

“Cut me some slack,” he said. “I wasn’t trying to start something.”

Not this time, anyway.

That moment in the hallway had been intense. He hadn’t been able to stop himself from reaching for her. And yeah, it was instinct again that made him want to hold her hand, to touch her. It wouldn’t have escalated, though. Probably.

“That isn’t why...” She sighed and slid from her seat, her boots crunching as she hit the gravel. She slammed the door shut.

He followed her out, closing his door a bit more gently. He was walking on her heels. When she stopped abruptly, he almost ran into her.

“I was trying to protect you, you ass,” she said. “I didn’t want you to be flooded with my thoughts.”

Damn. That was the first time he could remember her unloading on him like that. Now that he knew why she pulled back, it was well deserved.

He’d always felt alone in their fights, like he was talking to a wall. She never yelled back. She always stayed so calm. It made him wonder if she cared about him at all. Eventually, he’d start shouting, trying to be heard. They always ended up in bed, his last resort to establish some form of connection.

“It’s okay if you touch me,” he said. “I still can’t read you, even with my powers messing up.”

He shook his head and smiled. “Didn’t you notice before when we made out in the hallway?”

“I wasn’t thinking then.” She was quiet for a moment, then said, “Wipe that grin off your face.”

“How do you know I’m grinning? It’s pitch black out here.”?

“I don’t need to see you to know you’re smiling.”

Cassandra Chandler has studied folklore and mythology for her entire life and been accused of taking fairy tales a bit too seriously. Raised in a household where tarot readings and viewing auras were considered mundane, she spends her time writing and trying to appear normal. At least the writing is working out.

Her romances range from sweet to scorching, set in extraordinary worlds and driven by characters searching for a deep and lasting love. She has always seen the starry sky as a destination rather than a matte painting, though her primary residence is on earth.