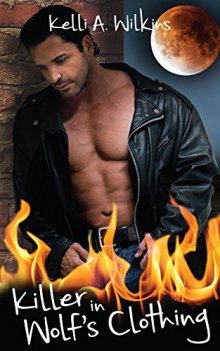 Today I’m sharing a look at my gay paranormal romance, Killer in Wolf’s Clothing. This novella is a fun look at the werewolf legend and blends mystery, danger, humor, and sizzling love scenes.

A super aggressive Alpha male, a serial killer, and a visit to a kinky sex club… What has Larry gotten himself into?

When Larry learns that his boyfriend Greg changes into another man during the full moon, he has a hard time accepting it—until he meets Deke, Greg’s alternate Alpha personality.

Deke doesn’t play nice and has no time for games. He only wants two things—to get laid and to get revenge against the arsonist who murdered his friends. Finally free from Greg’s restraints, Deke is ready for action, and Larry is more than willing to submit to Deke’s needs.

Together, Larry and Deke set out to find the killer. Their hunt takes them to an all-night Alpha sex club where things heat up for the two of them. But when Larry unwittingly falls into the clutches of the murderer, it’s up to Deke—and Greg—to save him before it’s too late.

Here’s an exclusive excerpt from Killer in Wolf’s Clothing:

“Yeah,” Greg answered. “When I was in California I filmed myself to find out what the hell was going on. I thought I had a sleep disorder or something… It turned out to be something, all right. Proof that I’m a freak.”

“Why didn’t you show the video to somebody? The psychiatrists would have—”

“Are you crazy?” Greg scowled. “Do you know what would happen if I did? Half the people wouldn’t believe me and the other half would lock me up to experiment on me. It’s bad enough that I know what happens. I don’t want the whole world knowing I’m a werewolf. But if I have to show you so you’ll believe that I’m not cheating on you, then… I guess I will.” He rose and motioned for Larry to follow him up to the bedroom.

“I filmed myself at different times, to be sure,” Greg explained as he took a lock box out of his closet and opened it. “It was always the same.” He handed Larry a DVD. “Go downstairs and watch it, then tell me what you think.”

“Don’t you want to watch it with me?”

“No. I’ve seen it enough times. Come up after you’re done… if you still want to.”

“All right, I’ll be back,” Larry said as he left the bedroom.

Greg sat on the edge of the mattress and held his head in his hands. This wasn’t fair. Just when things had been going great with Larry, this had to happen.

After being alone for so long, he had finally dared to join an online dating site. When he saw Larry’s profile, he couldn’t resist setting up a date. Larry was thirty-one, only a year younger than him, with wavy blond hair and mischievous blue eyes. Whenever he laughed, two dimples popped out around his perfect smile. They had a lot in common and they seemed like a perfect match. Every so often he wondered what it would be like to live together—but that was impossible. He was cursed to live his life alone.

Greg leaned back on the bed. What would Larry do when he saw the video? Run away? Try to have him committed? Or worse?

Larry stood in front of the TV and hit “play” on the remote. Werewolf, right. What was Greg trying to prove with this video?

A bedroom appeared onscreen. Larry cocked his head to one side. That was Greg’s bedroom furniture, but the room layout was different. Greg paced around in a pair of sweatpants. After about ten minutes he stopped and bent double, clutching his stomach. The video was silent, but from the grimace on Greg’s face, Larry knew he was in pain.

Greg staggered to the bed and lay on his side, facing the camera. A minute later, he had a spasm and tensed up. Larry glanced at the time stamp on the video. 8:03 P.M. Greg flopped onto his back, shaking.

Larry frowned. It almost looked like Greg was having a seizure. He watched Greg convulse as the minutes ticked by. After what seemed like hours, the tremors stopped. Greg lay still with his back to the camera. A second later, he rolled over and sat up.

He hit the “back” button and “play” again. The hairy man on the bed rolled over and sat up, stretching his arms above his head. Every muscle in his body rippled.

Larry leaned closer to the TV. The guy in the video was not Greg. He had darker hair, and his face was long and lean, almost sculpted-looking. His back and chest were covered in a pelt of brown-black hair. Greg wasn’t that hairy. In fact, that was one of the things he liked about Greg. He had the right amount of hair to be manly and sexy without looking like he was wearing a fur coat.

“It’s a trick. I missed something,” he muttered. He played the video back and watched again. Greg shook violently, flipping and flopping on the bed. The man that rolled over and sat up was the new guy, Mr. Bodybuilder.

“No f*cking way.” He watched the transformation again, staring at the screen to see how the trick was done. You could fake anything on computers today. After watching it five times in a row, his gut sank. This wasn’t faked. Greg wasn’t lying.

The big guy got out of bed and took a piece of paper off the dresser. He read it, then crumpled it up and tossed it on the floor. Without hesitating, he walked to the closet, pulled out a shirt and slipped it on. As he took off his sweatpants and changed into jeans, Larry caught a glimpse of his thighs. The dude’s legs reminded him of the weightlifters at the gym.

“Jesus,” he whispered, as the new guy walked out of the bedroom.

He let the DVD play. Nothing happened for five minutes, so he fast-forwarded until the stranger reappeared. At 4:52 A.M., the big guy stumbled in and collapsed on the bed, fully dressed. He lay there for ten minutes, then twitched a few times. When his convulsions stopped, Greg lay on the bed wearing the other guy’s clothes.

“You’re here. That’s a good sign. Still think I made it up?”

Larry spun around. Greg stood behind him, his arms folded across his chest.

“It’s… uh… definitely different. But it’s more along the lines of The Incredible Hulk than An American Werewolf in London.”

Greg chuckled. “Yeah. I’ll give you that.”

Larry pointed at the TV. “Him, this guy, where does he… how do you do that?”

Greg popped out the DVD and turned off the TV. “I don’t do anything. It happens. Don’t ask me to explain how it works. I have three other videos and they’re all the same. I told you I wasn’t cheating. I’m not going anywhere to meet another guy. I am the other guy.”

He hugged Greg. “I believe you, and I’m here for you. I’m sorry about before. I tend to get jealous. Anything you want or need, just ask.”

“Good.” Greg kissed him. “Come upstairs and stay with me. I want you to hold me and we’ll pretend none of this is real, for tonight at least.”

“Of course.” Larry draped his arm around Greg’s waist as they headed upstairs. His boyfriend was a werewolf, and a sexy one, no less. How was this possible? He had a thousand questions to ask, but now wasn’t the right time.

An idea popped into his head. Greg didn’t know how all this happened, but maybe the big guy did. There might be a way to reverse this—whatever it was—and all he had to do was wait for the full moon.

Order your copy of Killer in Wolf’s Clothing here:

Learn more about the book on my blog: https://kelliwilkinsauthor.blogspot.com/2017/06/killer-in-wolfs-clothing-inside-look.html

I hope you enjoy reading this very unusual gay paranormal romance. I enjoyed creating these quirky characters while offering a unique look at the werewolf legend.

I welcome comments and questions from readers, so feel free to contact me via my website, blog, or social media.