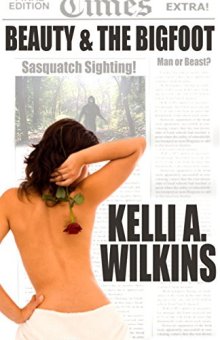 Here’s an excerpt from my paranormal comedy, Beauty & the Bigfoot. It's an unusual look at the legend of Bigfoot and blends the paranormal with humor, drama, and a few spicy love scenes. (If you think you know how it ends, think again!)

Can true love exist between the species?

Tara’s world is anything but normal. Her father is known as the resident crackpot – just because he’s on a personal mission to catch a Sasquatch. Despite all of the “Bigfoot evidence” cluttering their house, Tara never really believed in Bigfoot – until the day her father brought him home.

When Tara finally succumbs to her animalistic urges, she learns that Joe is not exactly who – or what – he seems. Joe is more than a Sasquatch – he’s her soul mate!

Her father grinned and folded his arms across his chest. “Well, now do you believe me? I told you I caught Bigfoot. You should listen to your old man. He knows what he’s talking about.”

Tara’s mind whirled. How was it possible? After twenty years of searching, her father had done it. He had actually captured Bigfoot.

Tara brushed a strand of black hair away from her face and bent closer to the Bigfoot. It looked almost eight feet long. Every inch of its muscular body was covered with dark brown hair. As in all the “official” reports, it didn’t really have a neck—its head seemed to sit on its shoulders.

She studied Bigfoot’s face. He had a wide, sloped brow and a strong jawline, but no hair on his nose or around his lips. And his nose was pointed, not flat, as had been reported by other researchers. She scowled. Now that she had taken a better look at him, Bigfoot didn’t resemble an animal at all. He looked like a hairy man.

“Dad, he’s too human-looking to be a Sasquatch. Are you sure this isn’t a—” She stopped herself. The word “hoax” wasn’t allowed in her father’s presence. “A man in a suit trying to fool you?”

“Nope. I tested for that. Watch this.”

Her father yanked a clump of hair on the creature’s inner thigh. The skin moved with the hair. He parted a section of hair, exposing light brown skin underneath. “If you scratch him, you get bits of skin under your nails, like dandruff. That wouldn’t happen with a suit. Trust me, I checked him out. He’s real.”

“But…” She shook her head. Why did she suddenly feel so light-headed? Was it the shock of seeing something that by all logic couldn’t be real? Or maybe it was finally realizing that her father wasn’t crazy. “What are you going to do with him… whatever he is?”

Her father’s hazel eyes sparkled as he took a crumpled sheet of yellowed paper from the back pocket of his faded jeans. She immediately recognized it as the “Plan When I Catch Bigfoot” that was always stuck to the refrigerator.

“First, I call that biologist-primatologist from the University and get him down here to authenticate. He’ll probably want to take our friend back to Seattle for tests. You know, DNA, hair samples, blood work, and who knows what else.”

He nodded a few times, then continued rattling off from the paper. “I’ll get in touch with the big networks and let them feed the story to the local stations. All the magazines will want to talk to me, too—National Geographic, Newsweek, and of course, Bigfoot Times.”

“Oh, of course. Why wouldn’t they?” She touched Bigfoot’s chest and was surprised to find that the hair felt soft, not coarse like an animal’s pelt. His chest muscles twitched under her hand, and she yanked her palm away. Was he waking up?

“I want the whole world to see him. I’ll have a pay-per-view event, live from Las Vegas. I’ll bring him out onstage and—”

“Are you out of your mind? You can’t do that. What if he gets loose like in King Kong?”

He ignored her. “Who could I get to host it? Too bad Leonard Nimoy is gone. He did such a good job narrating In Search Of… Maybe that alien researcher guy with the big hair would do it. I’ll —”

“Dad!” She grabbed his arm and spun him toward her. “You won’t be able to do any of that. If nothing else, this is an endangered species. The Department of Wildlife would have a coronary if they knew you captured a Sasquatch. You have to let him go.”

His mouth dropped open. “Let him go? Never! I spent the last twenty years trying to prove these animals exist. I finally catch one and you want me to set it free? No way.” He shook his head.

“Everyone in this two-bit town has made fun of me for years. I put up with them calling me a crackpot, a loon, a man who sees monsters, because all along I knew these things were real. I just couldn’t prove it. So now who’ll have the last laugh? But don’t worry,” he said, patting her shoulder. “I won’t let anyone hurt him. He’s too valuable.”

She sighed. Experience had taught her there was no way to reason with her father when he got into one of his obsessive moods. She had indulged his odd hobby all her life, humoring him each time he went out on an expedition. What harm was there in combing the woods and camping out in search of a mythical beast? Never in a million years did she ever think he’d really capture Bigfoot.

“Okay, so what are you going to do with,” she gestured at the trailer, “him?”

“He goes in the Bigfoot Barn, where else? I got it all set up and waiting.” He unhooked the trailer from the pickup truck and rolled it down the hill toward a huge metal shed.

“I sank iron posts into the concrete when I poured the foundation. I’ll chain him up in there a while, keep him on hold until the scientists get here and take a look at him.” He opened the oversized door, flicked on the light, and wheeled the trailer into the shed.

She watched as her father set a two-inch thick plywood ramp on the back of the trailer. He unfastened the chains from the trailer frame, then half-slid, half-dragged the unconscious creature down the ramp. The plywood tilted to one side. Bigfoot rolled off and landed on the floor.

Tara ran into the shed. “Be careful. Don’t hurt him.”

She couldn’t think of him as a Bigfoot—except for the shape of his head, he looked like a really tall, hairy man. She stared at him for a minute. Something about his look, or his scent, reminded her of camping. Why did she suddenly have a craving for marshmallows?

“Don’t make a fuss, Tara. They’re built tough. That fall won’t hurt him any. Besides, do you think I’d ruin my life’s work?” her father asked as he looped a chain through a metal ring in the floor.

“Will that hold him when he wakes up? He’ll be mad and—”

“Don’t worry, I’ve got this all figured out. It’s part of the plan.” He leaned the plywood ramp against the wall and backed the trailer out of the shed. “He’ll be able to move his arms and legs a little, but not too much. They’re strong, but I know this one—”

“This one? There are more?”

“Of course. Did you think the stork delivered them wearing diapers? There’s more of them up in the mountains, but—”

“Then what’s to stop them from coming down here and rescuing him?”

Her father’s eyes brightened. “You think they will? If they do, maybe I can catch a female and have a breeding pair. The scientists would love—”

“I can’t believe I’m hearing this. Dad, you have to let him go.”

“Nonsense.” He ushered her out of the shed and switched off the light. “Let’s leave him alone to sleep it off. I’ve got a lot of calls to make,” he said as he closed the door. “This is the find of the century. Think of it, Tara, we’ll be part of zoological history. We’ll be famous.”

“Yeah, and so will he. But at what price?” she groused. No matter how important this “discovery” was, it wasn’t fair to chain up an innocent animal and hold him captive in a strange place. Scientists would stick him with needles to study him—or worse. She bit her bottom lip and glanced back at the shed. Whatever Bigfoot really was, he certainly didn’t deserve this.

Can true love exist between the species?

Tara’s world is anything but normal. Her father is known as the resident crackpot – just because he’s on a personal mission to catch a Sasquatch. Despite all of the “Bigfoot evidence” cluttering their house, Tara never really believed in Bigfoot – until the day her father brought him home.

When Tara finally succumbs to her animalistic urges, she learns that Joe is not exactly who – or what – he seems. Joe is more than a Sasquatch – he’s her soul mate!

This paranormal comedy was originally published by Amber Quill Press. It has been re-edited and re-released by the author.

I hope you have as much fun reading the story as I did writing it. The characters are certainly unique to the romance world. I welcome comments and questions from readers, so feel free to contact me via my website, blog, or social media.
Happy Reading,