Edinburgh, the capital of Scotland, is a wonderful old city filled with history and medieval buildings, tourist attractions and great restaurants. It's a good home-base for a research trip or vacation and you won't need a rental car… if you're willing to walk and take the bus or train. (Parking in Edinburgh is a nightmare anyway.) I've explored several amazing castles in and around Edinburgh. Some are opulent royal residences, while others are crumbling, atmospheric ruins.

The most iconic castle in Edinburgh is, of course, Edinburgh Castle. It sits high atop Castle Rock, a volcanic plug, and looks out over the city. Archeological evidence suggests this rock has been inhabited since the second century AD. One building at Edinburgh Castle, St. Margaret's Chapel, is considered the oldest building in Edinburgh, built in the early 1100s by King David I and named in honor of his mother. The great hall was built in the early 1500s. The castle was a royal residence until 1633. After that, it was used as a military barracks. Research has established that the castle was besieged 26 times in 1100 years making it "the most besieged place in Great Britain and one of the most attacked in the world." And now it is Scotland's most visited paid tourist attraction.

Holyrood Palace is also known as the Palace of Holyroodhouse. It is the British monarchy's official residence in Scotland, and the Queen stays there for one week per year at the beginning of summer. This palace sits at the bottom of the Royal Mile, while Edinburgh Castle sits at the top. Attached to one side of the ruins of Holyrood Abbey, the palace was the main residence for the Kings and Queens of Scots since the 1500s. When the royal family isn't in residence, the castle is open for tours. One of the main features is the apartments of Mary, Queen of Scots, which date from the 1500s.

The 16th century north-west tower was built by King James V. The main part of the palace as it appears today was built between 1671 and 1678 in the Baroque style for Charles II when he was restored to the monarchy. What a contrast this elegant palace is to the next three castles on my list.

Craigmillar Castle, mostly a ruin, is about three miles outside the Edinburgh city center. We took the bus, then walked about a mile through parkland fields and over a hill. It was my birthday, so I considered this a wonderful present to myself. There's nothing I enjoy more than exploring castle ruins.

Craigmillar is what many call a hidden gem. Prior to some episodes of Outlander being filmed there, it was not considered a major tourist attraction. Not like the previous two castles, anyway. I have to say this was one of my favorite castles because it was a great surprise. I liked it better than I thought I would. It's filled with all sorts of nooks and crannies to investigate. There are several floors and rooms that changed purposes over the years. Mary Queen of Scots stayed here at times and had a room or apartment.

The views from the battlements over the Scottish countryside are amazing. The buildings on this site were started in the 14th century by the Preston family who were barons. The building and improvements continued over the centuries. Sir John Gilmour, Lord President of the Court of Session, bought Craigmillar and made improvements in 1660. The Gilmours left in the 1700s and the castle fell into ruin.

Dirleton Castle is less than 25 miles from Edinburgh, and accessible by either car or bus. The walk from the front gate through the beautiful walled garden was a wonderful experience. It was September and many flowers were still blooming. Dirleton is another amazing ruin. Different parts of the castle were built during different stages over the centuries. Some of the towers date from the 1200s and are among the oldest surviving architecture in Scotland. The oldest section was built by John de Vaux.

In 1298, during the Wars of Independence, Dirleton Castle was attacked and captured by Edward I of England. In 1356, the next Lord of Dirleton was John Haliburton who renovated the damaged castle and made new additions. In 1510, the Ruthvens acquired Dirleton and made further improvements. Oliver Cromwell attacked the castle in 1650, as he did so many Scottish castles, turning it into a tragic but romantic ruin. In the 1660s, the Nisbets bought the estate and built a new mansion and developed the gardens around the castle. The castle contains a lot of historical information and is fantastic for research.

Although Tantallon Castle isn't in Edinburgh, it is a short train ride away, close to North Berwick on the east coast. We visited it one day and were back to Edinburgh by that evening. The trip out on the train was so smooth, quiet and relaxing. Very few passengers. I had no idea a train ride could be so peaceful. Once we got off in North Berwick, we located the correct bus and rode 3 miles further to the castle, which is out in farm country on the shore of the North Sea. In the photo, that's a huge field of leeks in front of the castle. I'm sure they eat a lot of leeks in Scotland in their famous cock-a-leekie soup, made of chicken and leeks.

I had wanted to visit Tantallon for many years and it was everything I'd imagined and more. The castle is huge with lots of floors, wings, stairwells, rooms, battlements, etc. to explore. The Bass Rock sits just off the rocky cliffs of the shoreline.

Tantallon was started in 1358 by William, the 1st Earl of Douglas. In the 1380s it passed to the Earl of Angus and the Red Douglas dynasty. They owned the castle for 300 years and had many conflicts with the monarchy. Tantallon is considered the last great castle built in Scotland. In 1651 Cromwell attacked Tantallon causing such destruction that it fell into ruin.

Thank you for taking these wee virtual visits with me to five wonderful Scottish castles!

Lady Kristina MacQueen suffered devastating injuries at the hands of a ruthless Highland chief, Blackburn MacCromar. Two years later, he kidnaps her for a journey across the chilly, windblown Scottish Highlands to flush out her sister, Anna—the woman Blackburn forced to wed him. Red Holme, Blackburn's second-in-command, is equally brutal and determined to possess Kristina.

A Highland warrior and future chief, Colin Cameron has no intention of becoming entangled in the whims of another highborn lady. However, upon witnessing Lady Kristina being held hostage by the enemy, a knife to her throat, he resolves to rescue her and bring her to safety. When Red Holme sees Colin Cameron, he recognizes his enemy from a decade earlier and craves revenge even more than he lusts for the lady. But he is determined to have both.

Colin is the most charismatic and heroic man Kristina has ever met, and he awakens her woman's instincts. He might be her only chance to experience a brief moment of passion. Even so, she holds no illusions about marriage, for no worthy man will find her blindness and scars appealing, or see them as beneficial traits in a wife. But she can't see how he looks at her. Though Colin has sworn to never fall in love again, he cannot defend his heart against the strong, spirited and lovely lass who is like none other he has ever met.

Vonda Sinclair is the USA Today bestselling author of award-winning Scottish historical romance (aka Highlander romance) novels and novellas. Her favorite pastime is exploring Scotland and taking photos along the way. She especially loves ancient castle ruins! She also enjoys writing about hot Highland heroes, unconventional ladies and the healing power of love.

Her series are the Highland Adventure Series and the Scottish Treasure Series. Her books have won the National Readers' Choice Award, the CRW Award of Excellence, the Winter Rose Award of Excellence in Published Romantic Fiction--1st Place Historical, and an EPIC Award. She lives in the mountains of North Carolina where she is crafting another adventurous, wildly romantic Scottish story. Please visit her website at www.vondasinclair.com 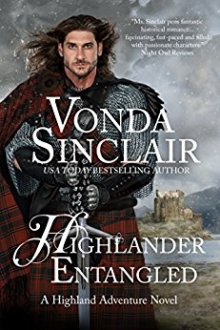