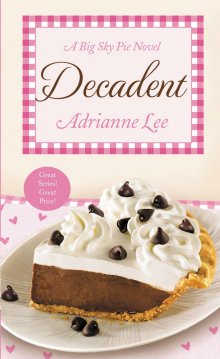 Contractor Wade Reynolds is having a tough year. His cherry farm went bust, and his construction clients threaten to unhinge what's left of his sanity. But Wade's passion for life heats up when he's hired to remodel a new storefront next to Big Sky Pie -and he falls for the red-hot, bad girl who's setting up her catering shop there.

Fresh off her own divorce, Roxy isn't looking for another relationship, just a spontaneous fling or three. Her contractor Wade looks as delicious as her specialty confections, but he's way too buttoned-up for a casual affair. Yet there's an ultra-sexy strength about him Roxy can't resist. What that man clearly needs is something decadent-like her...

She sighed and puckered her lips in a expression that should have conveyed disappointment, but that only managed to draw his interest in her mouth.  He fought to control the baser urges scrambling his brain.  She caught his hand.  “Come on.  We might as well check out the bedrooms and bathrooms so that I can tell Quint I gave it a chance.  He is trying to find me something.”

Wade followed Roxy down the narrow hallway, his gaze clued to the natural sway of her hips, as mesmerizing as a metronome.  He couldn’t look away.  Couldn’t haul his mind back to the reason they were here, didn’t care if this house was well-built, didn’t care what could be done to make it something that would work for her.  All he wanted to do was hold her, kiss her, and bury his aching cock deep inside her.

She entered the bathroom and released that loud, from-the-heart laugh that had unnerved him a couple of weeks ago, but that he now understood belonged to a person who didn’t hold back, who lived in the moment.  In all her moments.  He’d never done that.  He’d never just let go, not since. . .that one fateful hayride, a month before high school graduation.

Would she teach him how to let go if he asked?

He entered the bathroom on her heels, and when she suddenly turned around, she bumped into him.  Her orange scent seemed to explode, overriding the musty bathroom odor.   Her eyes met his, and he saw a glimmer of desire, felt an echoing shimmer deep within himself.  She licked her lips, and he lost his control.  “Roxy, oh, oh, Roxy, I, I. ...”

“Shut up and kiss me, cowboy.”

And he did.  As he deepened the kiss, pulling her against him, Roxy moaned sensuously.  She murmured his name against his mouth, and the cold house heated as though they stood beneath the sun.  Wade peeled off his jacket, unzipped her parka, and took her lovely face in both hands, his fingers reaching into her glorious red hair, her skin like silk against his fingertips.  She pulled back and began undoing the snaps on his shirt front, her mouth trailing down his jaw, to his neck, nipping little bites that sent impulses straight to his nerve endings.  Jesus, what was she doing?   Oh, lord, don’t let her stop.

His breath came quick and then quicker, everywhere her hot tongue moved drove him more and more insane.  The roaring in his ears was like the tide of the ocean, matching the pumping of his blood.  She lifted her head, her eyes were glazed with need, and his heart pounded harder.  She unbuttoned her blouse, one button at a time, and his gaze locked on the gift she was unwrapping.  Mounds of pearly flesh rose against the scrap of black lace holding her breasts.  She lifted his hands from behind her, bringing them to her breasts, and as his fingers touched her budded nipples, desire washed through him.

His jeans grew smaller, tighter by the second, his erection begging to be freed.

Roxy flicked the front of the black bra, and it fell away, revealing nipples ripe for him, eager for his touch, his taste.  As he bent to the feast, she shoved his shirt from his shoulders.  Her back was to the open bathroom door, and as Wade moved toward her, he spotted someone standing behind Roxy.

It took him a second to realize he wasn’t having a vision.  Heat barreled up his neck, setting his ears on fire.  Holy shit.  Someone, two someones were gaping at him.  At them.  And one of them was Emily’s teacher, Ms. Vedelman.

Adrianne Lee lives with her husband of many, many years on the beautiful Olympic Peninsula in Washington State in a pole barn building her husband transformed into an upstairs apartment with a shop below for his hot rods. Adrianne creates her stories on her laptop, in her recliner with her adopted cat, Spooky, curled between her calves, snoozing.  Over thirty years of summer vacationing in the Flat Head Lake area near Kalispell and Glacier Park has given her a love for all things Montana.