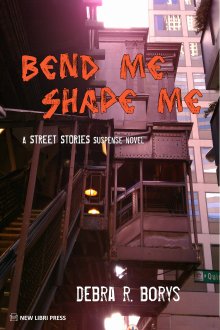 Thanks to Night Owl for allowing me to share my passion with you. Wouldn’t life be great if all our goals were set by something we are passionate about? The novels in my Street Stories suspense series combine two of my passions: suspense fiction and sharing the inspirational stories of people who live on the streets. I spent over fifteen years volunteering with agencies who offer services for homeless kids and adults and discovered that the stories they have to tell are not only fascinating, they deserve to be given a voice.

While the plots I select are bizarre and twisted, the people that populate my series are real life composites of individuals who both educated and enriched me during my years on the street. In the first novel, Painted Black, my street kid is a graffiti artist who illustrates the loyalty to street “family” that is essential to surviving homelessness.

In Bend Me, Shape Me, Snow Ramirez is an example of the thousands of people with mental illness who wander the streets because no one will help or even listen. Here’s an excerpt from that book to illustrate the obstacles Snow has to smash through in order to save her little brother from a psychiatrist trying to turn teens into terrorists.

“Alejandro, listen to me. This is serious shit I’m talking here. I’m not at the shelter no more and can’t look out for you. You got to do this yourself. No one pays attention to what I say about this. It’s got to come from you.”

She had his attention again. He looked at her with his forehead screwed tight in concentration. “I’m talking about Levinson,” she said. “You know, downtown, big office, brown leather chairs.”

“Jar full of Twizzlers?” His voice sounded uncertain, but when she nodded, his eyebrows drew together and his dark face grew even darker.

She knew that look. His stubborn ass was settling itself into wet cement and planned to take root there. But she had to keep trying.

If you're homeless and have a mental illness or addiction, there is no support system available to help the person work their way out of that maze. The opposite happens—it's hard to maintain a healthy self-image when people treat you like dirt, which leads to self-destructive behavior which alienates them even further.

Luckily, Snow finds my protagonist, reporter Jo Sullivan, who is willing to listen to her. So often that is all it takes to help someone help themselves. All you have to do sometimes is listen.

Snow Ramirez hasn’t trusted anyone in a very long time, not even herself. Memories of her childhood on Washington’s Yakama Reservation haunt her even on the streets of Chicago. When her squat mate Blitz slits his own throat in front of her, she knows it’s time to convince someone to trust her instincts. Blitz may have been diagnosed bi-polar, like Snow herself, but no way would he have offed himself like that if the shrink he’d been seeing hadn’t bent his mind completely out of shape.

Normally she wouldn’t care. Who wasn’t crazy in one way or another in this messed up world? After all, she’d gotten out from under the doctor’s thumb weeks ago and it was too late for Blitz now, wasn’t it? Snow’s little brother Alley, though, there might still be time to save him. If only she can get reporter Jo Sullivan to believe her story before Snow loses her own mind.

Jo Sullivan just wanted some new material for her column in Winds of Change, a weekly rag willing to dust the dirt off the seamier side of Chicago. Then she meets fifteen-year-old Lexie Green, with her haunting eyes, eerie tale, and the terror that sends the girl fleeing into the night. When Lexie disappears, Jo finds herself haunted by her own dark past and unable to ignore the anonymous faces of youth on the streets, Together with Cry, a street graffiti artist and friend of Lexie, Jo uncovers a path littered with corpses, corporate greed and one man's private collection of freeze-dried cadavers.

Christopher Robert Young, Cry for short, told himself he went with Lexie to keep her safe, that it had nothing to do with his struggle to avoid hustling along the harbor like Moon and the others. Selling blow jobs for forty bucks, however, pales in comparison to what he finds in Cole's apartment above the funeral home. And even a hungry kid will only go so far to fill his stomach. In the ensuing struggle, Chris escapes but Lexie does not and that fact still haunts him.

Sidney Cole’s fascination with death has soothed him since childhood. Since the first dead pigeon he kept in a shoe box under his bed so he could stroke the downy feathers, to the first failed experiment in human sublimation he should have disposed of–but didn’t. He just wants to be left alone with his collection, and his fantasies. And Philip Quinlan had promised him peace.

Debra R. Borys is the author of the STREET STORIES suspense novel series. A freelance writer and editor, she spent four years volunteering with Emmaus Ministries and the Night Ministry in Chicago, and eight years doing similar work at Teen Feed, New Horizons and Street Links in Seattle. The STREET STORIES series reflects the reality of throw away youth striving to survive: Painted Black and Bend Me, Shape Me. Her publication credits include short fiction in Red Herring Mystery Magazine, Downstate Story and City Slab.