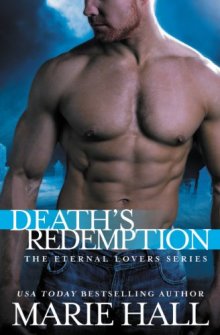 As a Seer, Mila O'Fallen is one of the last humans capable of channeling visions of the past and future. The one thing she can't see is her own fate, but she knows it's grim. All types of ruthless, supernatural creatures want to use her abilities, and they will do anything to gain access to her powers. When vampires descend upon her, it looks like the end-until a formidable figure appears. She feels a connection to him that is instant, unearthly, and explosive.

Grim reaper Frenzy never thought he would see the eyes of his lover again. She was murdered centuries ago, but her amber eyes are alive in Mila. Though it's not his job to protect humanity, something tells him protecting this human is what he was born to do. Yet vampires are the least of their worries. Frenzy and Mila quickly learn that a dark force is matching their every step. And even as they crave each other, the darkness craves them . . .

His hands were so warm, and she hated to admit this, even in the privacy of her own head, that it was nice. That in the topsy turvy thing she now called life, it felt like an anchor, his touch helped her to focus, breathe easier, to panic less. Why? She hardly knew him and yet her very soul resonated vibrantly when he was around.

The way his hands had curved along the contours of her body, how he’d moved in her, tasted her, sipped at her lips like she was a fine wine, it’d all felt so… familiar. Like all her life had been a slow, but inexorable progression to him. The dreams she’d had, the face of the red haired stranger, he called to her on a level she couldn’t understand.

“I’m going to keep you safe.” Those molten silver eyes hooked her, blazed with truth. “Nothing will take you from me.”

Eve Philips thought she could never love again. After her husband died in a hit-and-run accident, Eve poured her heart into her potions shop, Witch's Brew, and hasn't given any man a second glance-until Cian. As soon as she locks eyes with him, Eve knows she'll never be the same. Gorgeous and mysterious, he incites a passion in her that she's never felt before. And it's almost otherworldly . . .

Cian knows Eve is special the minute they lay eyes on each other. He's a supernatural being with a dangerous duty, and being seen is not part of the job description. But when he meets the kind, beautiful Eve, all the rules go out the window. Now that his superiors have gotten wind of it, he has a wicked enemy on his tail. Yet all he cares about is Eve: loving her, protecting her-and finding the right time to tell her his dark and terrible secret, a secret that threatens both of their lives . . .

Previously published as The Witching Hour

Then the day came she realized apart from the sexy bad boy she married, there'd be no vampires/shapeshifters/mermaids/fairies/or even stinky trolls in her future unless she wrote about them. More often than not she can be found roaming the wild, lush tropical forest she calls her backyard (a.k.a. Hawaii) and day dreaming constantly about her latest project.

Her Mad Hatter is the first book of her Kingdom Series.

She loves to hear from her readers and can be reached at mariehallwrites@gmail.com