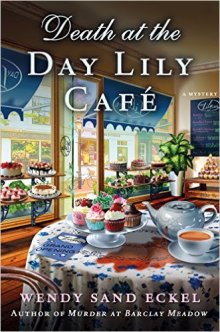 First up we have an awesome giveaway for you and below you get to delve into an Exclusive Excerpt and Cinnamon Muffin recipe!

Enter to win an Autographed copy of "Death at the Day Lily Cafe"!

Rosalie Hart has finally opened the café of her dreams. Decked out with ochre-tinted walls and stuffed with delicious organic fare, the Day Lily Café is everything Rosalie could have hoped for. But not five minutes into the grand opening, Doris Bird, a dear and trusted friend, cashes in on a favor--to help clear her little sister Lori of a first degree murder charge.

With the help of her best friend and head waiter Glenn, Rosalie is on the case. But it's not going to be easy. Unlikable and provocative, murder victim Carl James Fiddler seems to have insulted nearly everyone in town, and the suspect list grows daily. And when Rosalie's daughter Annie gets caught in the crossfire, the search for the killer becomes personal in this charming cozy perfect for fans of Diane Mott Davidson and Joanne Fluke.

Rosalie Hart has realized her dream. She has opened the Day Lily Café and the first few hours of the grand opening were a success. The restaurant has been overflowing all morning, the food in a constant flow out of the kitchen, the guests sated and happy. During the lull between breakfast and lunch, Rosalie and her best friend/head waiter, Glenn, sit down for a breather. Custer, an illegally handsome twenty-something cook, is back in the kitchen where he had just met Rosalie’s only daughter, Annie, who is home from college for the summer. Crystal, a young ethereal woman with a Celtic tattoo behind her ear, is wiping down the tables.

“Coming through…” a loud voice called from the doorway.

I looked up to see Janice Tilghman charging toward us.

Janice perched on the seat next to Glenn and dropped a large Coach bag on the counter. We were playmates as children when I visited my Aunt Charlotte during the summers. Janice came from a wealthy, Eastern Shore family, as did her husband. She had opened her arms and home to me last year when I had been feeling as lost and alien as E.T.

“Both.” She glanced over at Glenn. “It's an emergency.” She eyed his espresso. “I thought you were getting a liquor license, Rose Red.”

I placed the pastries on a small glass plate and set it in front of her. “I’ve already got it. But I need a mixologist and/or a sommelier. I don’t know the first thing about making cocktails. Let alone selecting a wine list.”

“You could slip a bottle of Jack under the counter,” Janice said as she bit into a brownie.

“One of these little concoctions may help,” Glenn said as he sipped his espresso.

“Yes. Could you slip a valium in there too? Oh, and how about a shot of estrogen.”

“Maybe you should make her an espresstrogen,” Glenn said and tried to suppress a smile.

Janice nudged Glenn’s arm. “Good one.” She took another bite of the espresso bar. “Did you make these?”

“Kevin Davenport stopped by when I was getting ready to open a few weeks ago and offered to provide me with pastries. I tried one and about fainted.”

“I love that guy.” Janice looked over at Glenn. “He and his boyfriend, Jake, are the first gay couple to last in Devon County. At least so far. But they’re pretty dug in.”

“You don’t say?” Glenn said. “And so many people I know here on the Eastern Shore are forward thinking.” Glenn sipped his coffee. “I guess it only takes a few.”

“So, tell me,” I said as I started the next espresso. “What's going on with you girlfriend?”

“Peri-menopause.” She pushed her hair from her face. A few damp strands clung to her forehead.

She peered over at Glenn. “Is this too much information?”

He shook his head. “Sounds like you need to vent.”

She pointed at Glenn with her thumb. “Was that a play on words?”

Crystal strolled over and stood next to Janice. “I suggest a berry tincture.”

“A what?” Janice said, scrunching up her nose. “What’s a tincture? Sounds painful.”

“It’s like an extract but it’s made with alcohol.” She leaned in and peered into Janice’s eyes. “You’ll need to mix it with some black cohash,” Crystal said and crossed her arms.

“Well––” Janice reared back from Crystal’s intense gaze. “I like the alcohol part. Vodka?”

“That will work,” Crystal said. “Hold out your arm––straight out and keep it steady.” Janice did as she was told. “Now see if you can resist when I push down on it.” Crystal pushed and Janice’s arm collapsed into her lap.

“So what does that indicate?” Glenn asked.

“Are you depressed?” Crystal asked Janice.

“I cry for no reason,” Janice said. “Just this morning I was doing the dishes and watching Fox News and all of a sudden I started bawling like a baby.”

“There’s the reason,” Glenn said into his cup.

“St. John’s Wort, then,” Crystal said. “Add a teaspoon of that.” She looked around the room. Table six was finishing up. “Do you mind if I take a little break?”

When the espresso was finished I set the cup in front of Janice. Only crumbs remained on her plate.

“I see where you’re looking,” Janice said, sounding indignant. “I was a size six before all this started.” She straightened. “Don't judge me until you've walked in my wide pants.”

“You’ll see when it happens to you.” She shook her head. “I’m hungry all the time and hotter than Hades. My butt is getting so big I'm going to change my name to Jan-ass."

“Maybe Crystal will help,” Glenn said. “I might see what she can do for my knees.” He stretched out a leg and massaged his knee cap.

Custer shuffled through the door separating the kitchen from the restaurant, shoelaces untied, holding a Day Lily Café coffee mug. “I need a refill.”

“Are you working here, Custer?” Janice said, a concerned scowl on her face.

“Back in the sweat box.”

“Ceiling fans,” she said. “I've installed one in every room. Trevor had the down comforter over him last night because I had the AC on 64. The fan was spinning so fast his combover was flapping against the pillow.”

“I don’t suppose I can have that last brownie?” Custer said.

Janice hopped up. “I'll fight you for it.”

“Are you sick of the muffins, Custer?” I asked. “What about a scone?”

“I think I should let Miss Janice have it.”

“I only need chocolate,” Janice said.

“Hey,” Custer said. “Is this belt okay?” We all stared as Custer lifted his chef's jacket. A white canvas belt was looped through his jeans that hung low on his trim hips. The tip of his plaid boxers peeked out exposing a rippled set of abdominal muscles. I blushed instantly at the sight of his rock hard stomach and the vertical line of dark hair disappearing into his pants.

“It's a nice belt,” I said quickly and looked away. “I’m certainly glad you’re wearing it.”

“It’s fine, Custer,” I said and cleared a catch from my throat.

“Okay, good,” he said. “Annie and I are hanging out tonight.”

“Annie?” I swallowed hard. “Really?” I wadded a table napkin in my fist and squeezed.

“Yeah.” He sized me up. “She asked me.” Custer turned and walked with purpose back to the kitchen.

"Holy-Mother-of-Mary, did he really just show us that?” Janice said.

“I knew it was a good idea for you to open this place,” Janice said. “I feel better already.”

I stared at the door Custer had just disappeared through. “Those twelve-pack abs, that are on probation I might add, are hanging out with my daughter tonight.” I crossed my arms. “Do you know why he’s on probation?”

Wendy Sand Eckel is the author of MURDER AT BARCLAY MEADOW, the first in the Rosalie Hart mystery series set on Maryland’s Eastern Shore. A member of the Mystery Writers of America, she has degrees in criminology and social work and a passion for words and their nuanced meanings. DEATH AT THE DAY LILY CAFÉ, the second in this series, will be released by Minotaur Books July 26, 2016.