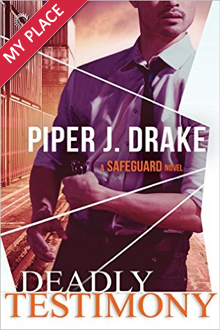 I travel approximately 90% of the time for my day job. As a result, my writing place varies from day to day, week to week. I could be writing on a plane or getting in a few writing sprints at the airport while my flight is delayed. Trains are wonderful for writing as the world rushes by. Hotels can be a touch lonely, but they can have cozy nooks to settle into for a writing session after a long day on client site for the day job. Sometimes, I’ll even set up two different work areas in my hotel room: one for day job and one for writing.

One thing I’ve learned is that I’m more productive writing in a different place from where I’ve been working on day job things. As a result, I’ll often seek out a business lounge to grab a bite to eat while I write or even go to a restaurant with great ambience. I search out random balconies or courtyards. I’ve even wandered down the occasional questionable alley to find a fantastic courtyard on the other side.

Above all, I make sure my laptop is fully charged before I head out for my writing adventure. ;)

Play Find the Piper around the Internet for insight into her frequent travels and inspirations for her stories.

The stakes have never been higher as an elite team member must outwit a dangerous killer and save the man she's sworn to protect. The second installment of the exhilarating Safeguard series from Piper J. Drake.

Kyle Yeun didn't start out bad and he doesn't intend to end his life while on the wrong side of the law, either. His testimony to his former employer's environmental misdeeds has earned him a protection detail compliments of the US government. But due to a dark international conspiracy Kyle was unaware of, his former employers have made ending his life a top priority. Realizing he needs more protection than the US Marshals can provide, he turns to Safeguard after seeing the beautiful, deadly Lizzy Scott in action.

One look at Kyle, and sniper Lizzy Scott knows this isn't going to be an easy protection job. He's arrogant, irritating and almost irresistible. Instead of being put off by her hardened attitude, Kyle seems to thrive off the challenge. And she's slowly giving in to his charms.

After narrowly escaping the latest assassination attempt, Lizzy starts taking dangerous risks to keep him safe. But the last thing Kyle wants is another life ruined because of his actions. He found his redemption in Lizzy's arms and he'll risk everything to make sure they both make it out alive. As will she, even if it means walking away from him to keep him safe.

Isabelle sighed. No wingman or cavalry coming to his aid. He needed help but it wasn’t forthcoming. This was not going to resolve in the next thirty seconds and that was all she was willing to wait. Besides, she couldn’t leave a person alone to face odds like these. She’d been on her own in these situations plenty of times and it’d never been fun.

“Gentlemen, get out of my way.”

Humor and interest sparked in the Asian man’s eyes. He understood English, apparently. Seattle being a major city for travelers, it was always good to note rather than assume a listener could understand the conversation. Especially if she might have to advise him to take action.

The hulking goon who’d originally spoken to her turned then. “What did you say?”

“Get. Out. Of. My. Way.” She put some steel into her voice this time. No need to increase volume when intensity works better.

Beady eyes narrowed at her as goon number one flexed his thick fingers into a meaty fist and released them. Threat clear.

Ah, well. Intonation could work on people with more neurons firing inside their heads. She might not have a whole lot of stature going on at five foot four, but her new friend should’ve at least spared a moment to ponder that maybe a woman in a black suit with white dress shirt and an earbud hanging over her collar from a wire might mean something.

He was a thug dressed in a monkey suit.

She was a much higher pay grade.

Piper J. Drake (or "PJ") began her writing career as "PJ Schnyder" writing award-winning sci-fi & paranormal romance and steampunk. She has received the FF&P PRISM award for her work as well as the NJRW Golden Leaf award and Parsec award.

Now, Piper writes bestselling romantic suspense, incorporating her interests in mixed martial arts and the military into her writing. The True Heroes series features hot military men, the women they love, and the dogs who have their backs. The Safeguard series introduces the men and women of Safeguard--an elite group of mercenaries who will go to any extreme to complete a mission...even risk their hearts.