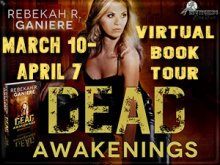 Looking for a paranormal read, check out Dead Awakenings! 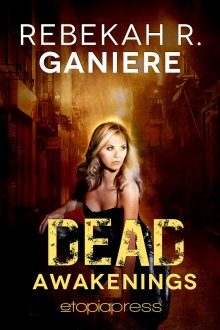 Being dead can be a great way to find yourself…

Struggling to pay her bills in New York, theater student Evaine Michaels sees an opportunity to make money by taking part in an unsanctioned clinical trial for a new drug. But things don’t go as planned. She wakes up in a derelict hospital, chained to a bed with no memory of who she is or how she got there. Then a band of pale-skinned men, led by the gorgeous Luca, bursts in and rescues her. Evaine is instantly attracted to Luca, but he’s so hell-bent on stopping the experiments, he has no time for the feelings she’s awakening within him.

Safely back at Haven House, Evaine is introduced to The Family and learns that the drug trials have made her a Deader, a reanimated Undead. Evaine and Luca find themselves getting close, until Evaine remembers not only who she is, but that she’s engaged. And her fiancé, Tristan, is probably still looking for her. Torn between her first love and her new heart’s desire, Evaine has some hard choices to make.

But when a rogue faction of Deaders, called Feeders, attempt to kidnap her, Luca suspects Evaine might be the key to the experiments, and everyone must band together to keep Evaine off the cutting table…

Rebekah grew up on both the east and west coasts and currently lives in the Los Angeles area. From the Giving Tree by Shel Silverstein to The Stand by Stephen King, Rebekah immersed herself in other people's made up worlds. She began writing in junior high and then found she liked pretending to be other people's characters in high school. Lettering in drama she went on to study theater in college as well. After college she continued acting till becoming a mom. Ultimately, she ended up going back to writing her characters down instead of acting them out, so she could stay at home with her kids.

Rebekah is a member of Romance Writers of America and is a board member of both the Fantasy, Futuristic, & Paranormal and her local Los Angeles chapters. When she isn't spending time telling the lives of the characters constantly chattering inside her head, you can find her with her husband and four children; reading comic books, gaming, at the movies or taking care of the menagerie of pets. A dog, a rabbit, two bearded dragons, and three tortoises. Wonder woman, the escaped snake, has yet to be located.