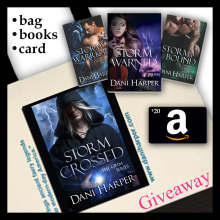 Deluxe canvas book bag featuring the cover of Storm Crossed, signed paperbacks of the first 3 books in the Grim Series, and a $20 Amazon Gift Card.

Open to residents of USA, Canada, and the UK.

Comment question – You just met a living breathing member of the faery race. How would you react?

STORM CROSSED, Book 4 of the Grim Series, by Dani Harper

A fae who doesn’t believe in love.

A mortal who has no time for it.

And a desire that defies everything they know.

The latest standalone novel in Dani Harper’s Grim Series, Storm Crossed, will delight both old and new fans alike, transporting them to the ancient fae realm beneath the modern human world, where magic rules and menace abounds . . .

Heir to a noble fae house, Trahern is forced to watch helplessly as his twin brother is cruelly changed into a Grim—a death dog—as punishment for falling in love with the wrong person. Trahern doesn’t believe love exists, but he will do anything to keep his brother alive—even join the Wild Hunt and ride the night skies of the human world.

Lissy Santiago-Callahan believes in love but has no time for it. She’s busy juggling her career as an academic and her home life as a single mom to a young son with Asperger’s. Her hectic life in sleepy Eastern Washington is made even more chaotic with the sudden arrival of a demanding fae and his unusual “dog.”

Mortal and immortal have nothing in common, and the attraction between Lissy and Trahern surprises them both. But when their desire places Lissy and her child in the path of a deadly faery feud, will the connection last, or will their separate worlds prove too great a divide?