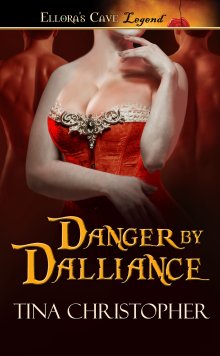 Danger by Dalliance by Tina Christopher

Sequel to Rescue by Ruin.

Sarah Rigdon is desperate. Penniless with taxes due, she can either beg mercy from the ruthless tax collector or turn to the last man she wants to ask for help. Archer Latimer stirs desires no proper lady would ever admit to. Though their meetings always end in quarrels, she can’t deny the heat between them. When he agrees to help, Sarah thinks her luck has turned. But she should have known nothing with Archer is ever easy.

Archer and his lover Warren Dorvee have spent years searching for the right woman to complete their family. Both believe luscious Sarah is the one and now have a chance to pursue her. After all, the price of Archer’s help is for Sarah to pose for Warren’s latest painting. Nude.

But trust has to be earned and a crisis in London threatens their love. The three must navigate through lust, lies and secrets or risk being torn apart forever.

Tina Christopher spent her early years flitting across the Channel between Germany and England. After touring the world extensively, she finally laid down roots in Toronto. And while Canada’s winters may be frigid, Tina’s characters are anything but!

Like most writers, Tina often hears voices in her head, but it took the encouragement of an editor friend before she actually put fingers to keyboard.

While those first stories will never see the light of day, she’s subsequently honed her craft and learned to build not just worlds, but entire galaxies. Her first book from Ellora’s Cave features a galaxy filled with Vampires, Humans and angel-like aliens called Naema.

When not imagining far away worlds and scorching hot encounters, Tina can be found on her sofa working through her never-ending TBR pile or venturing into the real world—whether to a nearby café or a passport-required destination. She’s a member of the RWA’s Toronto chapter. Her two degrees in environmental conservation, majoring in large animal studies, come in handy when wrestling with supernatural beasties.