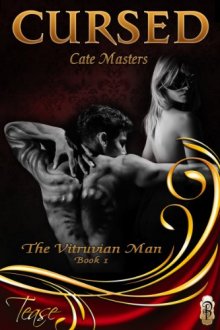 We have author Cate Masters dropping in to share her Vitruvian Man series.

Did a song ever stop you in your tracks? Or maybe just work its way into your subconscious and keep replaying in your head?

Lots of songs do that to me. I'm not someone who can write with music playing in the background. Oh, I absolutely love music, and I could spend countless hours trolling YouTube for favorite bands. But while I'm writing, I find music too distracting, and I'd end up either singing along or blocking it out completely.

Music often inspires me, and I love to incorporate it into stories. Sometimes all I need is a snippet of lyric, and a story evolves. That's how Cursed began. The oldies station my hubby likes often plays The Goo Goo Dolls' song Iris.

One line of lyrics jumped out at me: "I'd give up forever to touch you." What a powerful notion. Such an incredible sacrifice.

I began jotting notes revolving around that line. But I'd already written several stories about angels who'd given up their heavenly status after falling in love, so I wanted something a little different. An alpha male, for sure, but a little bit unusual.

So Bruno diCesare began to take shape. Bruno's a music lover, too, and sometimes people strolling through Venice might hear the lovely strains of a Stradivarius violin echoing along the narrow alleyways. They'd never see him because he hides himself away until Carnevale, the ten-day masquerade. And even then, he stays in his disguise.

Until the day he meets Melina. :)

What about you -- have you ever fallen in love with a song? Or its lyrics?

Cursed is the first in The Vitruvian Man series, and Decadent recently released Charmed. Watch for Claimed to follow soon!

Bruno diCesare lives in the shadows. Alone and hidden from the world, his only joy comes but once a year---at Carnevale. For ten days, he can blend in with the colorful, masked masses without revealing his true nature. But this time, he is faced with fiery temptation.

Carnevale allows Melina Weaver to be someone else--someone sexy, daring, enticing, someone who lives on the edge. It's a far cry from her real life, with long and boring hours spent in a sterile lab. When her fire dancing arouses the curiosity of a dark and compelling stranger, she might have more excitement--and danger--than she ever imagined.

Can Bruno escape his cursed existence? Can he protect her, and can she trust him to save them both?

Ten days. The difference between bliss or desolation, redemption or remaining forever Cursed.

Melina should have stayed in her room. Finding him had seemed like such incredible luck. Now she wondered whether luck had turned against her.

That sound—almost an animal sound—had that come from him? Had she imagined it? Strange things went on during Carnevale, her online friends had said, some so inexplicable no science could explain them. She’d laughed when they warned her she might get in over her head.

The sheer strength of his muscles, the raw power beneath his clothes, thrilled her. His pace conveyed the same urgency.

Pressed to his side, nerves jangling, her foot slipped on the stone step.

In one fluid motion, he scooped her into his arms and continued hurrying along. “Are you all right?”

“Unless embarrassment leaves a mortal wound. I’m normally not so clumsy.” She settled against his broad chest. Such incredible stamina. An image pierced her mind: his muscular, naked torso above her, his hips rocking against hers. His presence overwhelmed her, and she was acutely aware of every motion, every breath.

At the bottom of the stone stairs, he set her on her feet but maintained his firm hold. “Dampness has a habit of lingering here. You’d best allow me to assist you.”

“Please.” She fitted herself against him, acutely aware of the way his body moved against hers.

“In these calle of San Samuele,” he said, “Giacomo Casanova spent his youth.”

“Calle?” She should have brushed up on her Italian.

“Narrow and dark. I wonder how many trysts Casanova had in these alleys?” And Casanova had nothing on Bruno. Women probably flocked around him constantly. Acid flashed through her at the thought.

“Too many to recount.” He paused, then added, “If one believes the writings in his diary. His mentor, the poet Giorgio Baffe, lived just down there.”

“Mentor?” She didn’t recall Casanova writing poetry. Did Bruno as well? Or was he not romantic that way?

“Of a sort. The man who introduced Casanova to worldly pleasures.”

The way the last two words rolled off his tongue, so enticing. She glanced at the dark steps that led to deeper shadows beside the canal.

She surprised herself by steering him down there, tugging him to an abrupt halt. “Do such mentors still exist?”

He whirled her against a wall. “Why? Would you be interested?”

She let her hands wander across the contours of his chest. “You did offer to introduce me to the delights of Venice.”

The same growl as earlier rumbled in his throat, unmistakable this time. “You do like to play with fire, don’t you?”

And he knew how to ignite one.

Cate Masters has made beautiful central Pennsylvania her home, but she’ll always be a Jersey girl at heart. When not spending time with her dear hubby, she can be found in her lair, concocting a magical brew of contemporary, historical, and fantasy/paranormal stories with her cat Chairman Maiow and dog Lily as company. Look for her at http://catemasters.blogspot.com and in strange nooks and far-flung corners of the web.

Catch up to Cate