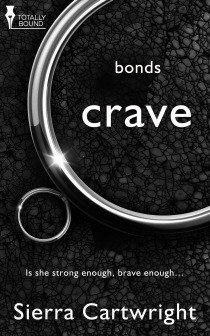 Entry via Link below.
This contest is sponsored by a third party.

To celebrate the release of Crave Totally Bound are giving you the chance to win a Kindle Fire HD! Enter here for your chance to win: https://www.totallybound.com/competition/crave-kindle?utm_source=nightowlromance&utm_medium=blogtour&utm_campaign=crave

She still craved him… The sight of a collar in her boyfriend’s drawer had stunned Sarah. Panicking, she had fled. But no other man has ever been his equal.

Two years ago, the woman he’d hoped to collar and marry disappeared. So Reece McRae is stunned to find his former girlfriend on her knees, behaving as the submissive he’d always wanted.

Is it too late? He should refuse her, but an undeniable sexual attraction consumes him.

Sarah had been under Reece’s spell from the moment she met him. When she found a steel collar in his drawer, she panicked. The idea of a lifetime of his relentless demands, sensual and otherwise, suffocated her.

In the years they’ve been apart, she hasn’t met his equal. Now, convinced one last night will vanquish his memory, she sets out to seduce him.

The Reece she returns to is even more determined to have his way. Is she now strong enough, brave enough, to surrender to his love? 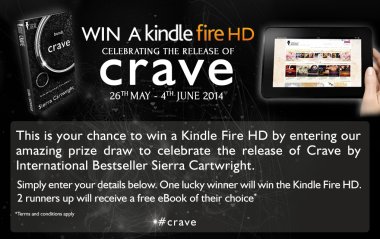 Needing to protect herself, she crossed her arms over her chest.

He tapped a finger on her chest, and the sensation reverberated through her.

“Yes, Sir,” she whispered. Maybe this hadn’t been one of her better ideas. Part of her had actually believed that sceneing with him would help her get over him. Instead, it had made things worse.

She’d again given herself over to him, knowing he would care for her. But she’d been unprepared for the way he had overwhelmed her senses.

When he’d entered the room earlier, she’d known it was him, even though she hadn’t been able to see anything and he hadn’t spoken. The forceful sound of the door slamming had ignited her nerve endings.

She’d wanted to look at him, drink in his tall, good looks. Remaining still had taken all of her resolve.

When he’d instructed her to kneel up, she’d been breathless.

The years they’d been apart had hardened him. Either that, or it was just her who brought out the steel in his eyes, in the rigidness of his posture.

No matter what, he still devastated her.

Standing in front of him, close enough that every one of her breaths was scorched by his scent, she yearned to run her fingers over his chest or bury them in his thick, dark hair.

Until this moment, she’d underestimated his power over her. She’d been right to run. This man, more than any other, made her aware of her femininity and vulnerability. Before she was ready, he scooped her from the floor, into his arms.

Like the sound of Crave? You can buy it here: https://www.totallybound.com/crave?utm_source=nightowlromance&utm_medium=blogtour&utm_campaign=crave