They call me Commander Casanova.

But the only cowboys brave enough to say it to my face are the other elite Grey Wolf warriors. As High Commander of the Grey Wolf armies, I’m well aware that my exploits in the bedroom are near as legendary as the number of enemies I’ve left bleeding on the battlefield, but I’m not fond of the nickname. I’m also not the type of man anyone dares piss off, so they keep their stories to whispers, rumors. And it will stay that way.

How can I be certain? I’m High Commander, so I’m used to getting my way. In fact, I damn well expect it. And if you ask me, their problem isn’t with the number of partners I’ve slept with, it’s about my rules.

One night. No strings attached. That’s it. I make my expectations clear from the start. For a warrior like me, relationships are a liability I can’t afford. I don’t do romance. Never have.

At least, I didn’t until I met Belle Beaumont, a woman who should be my enemy.

No, a woman who is my enemy.

And also the she-wolf who saved my life...

Now, I’m suddenly not so certain I want to stick to my own rules, and to make matters worse, Belle is the one woman my past dictates that I can’t have. Being with her would risk everything—my position, my pack, my family and my secrets...

Secrets not even my packmaster knows...

But the harder I try to stay away, the more I realize that she’s an itch I just can’t seem to scratch. So I’ll stick to my rules like I have so many times before.

It will be enough, because it has to be enough, and if she’ll have me, I’ll make it worth her while.

I may not promise to call the next morning like a gentleman, but she won’t forget a night with a wolf like me...

Born a cowboy and bred a warrior...

High Commander Colt Cavanaugh has spent his life defending his pack and its sprawling ranchlands. But the hardened Grey Wolf soldier has a dark secret that could destroy his life forever.

Belle Beaumont is a wanted woman, on the run from the wolf pack that kidnapped her. When fate brings her face-to-face with the Grey Wolf High Commander himself, rivalry becomes passion, and suddenly more than just her freedom is at stake.

Colt will fight to the death for the healing Belle brings to his battle—worn heart—and for this cowboy wolf, all's fair in love and war...

This giveaway is now over. The lucky winner is: Nancy Payette

Kait Ballenger earned her B.A in English from Stetson University followed by an M.F.A in Writing from Spalding University. After stints in multiple careers, Kait finally decided that her eight-year-old self knew best: that she was meant to be a writer. Kait lives in Florida with her husband and young son. Follow her at www.kaitballenger.com 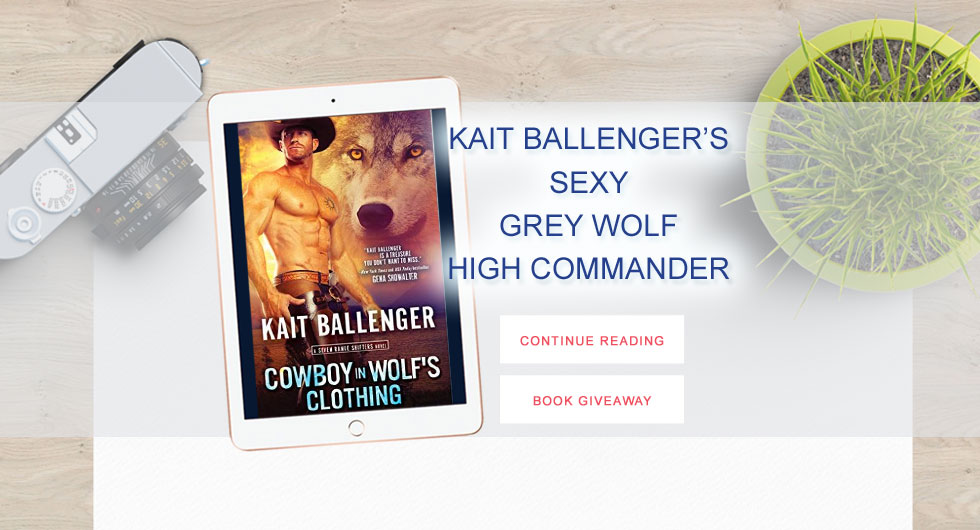