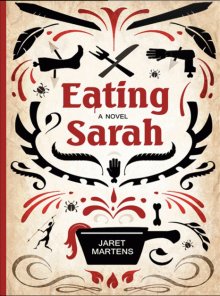 Ever since Sarah was young, all she could dream about was participating in The Hunt — a monthly event in which her people sneak into the nearby cities and villages to gather food. And in Sarah’s world, the food they feast on most is human flesh.

In the deep forests of the Rocky Mountains, Sarah lives in a community of man-eaters. With Fall ending and hunger running rampant, Sarah and her cannibalistic community are forced to change the rules of their Hunt. And with these changes come new risks. When her first Hunt ends in catastrophe, and one of her only friends is lost, Sarah is sentenced to work in the slaughter shack.

Among the dead and dying, Sarah is introduced to Troy: a man she knows she will be forced to kill. As her life crumbles around her, her feelings for Troy grow, along with the knowledge that, if anyone discovers her secret, she will find herself in his place.

With nowhere to turn, and Troy’s time running out, Sarah becomes set on leaving. But, in accordance with their laws, to leave would be to dishonor the family name and, in turn, cause their deaths. As suspicions of mutiny within the colony rise, everyone is watched and every move Sarah makes could be her last.

And then there are the bodies–the ones that are unmistakably their own, complete with missing limbs and markings that oddly look like bite marks.

Boundaries are pushed, allegiances broken, and the very question of what it means to be human is called into play.