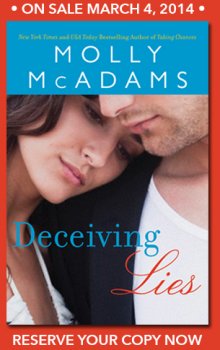 Today we get the opportunity to share with you the cover for Deceiving Lies by Molly McAdams! 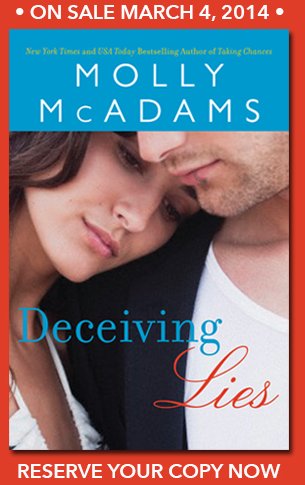 Rachel is supposed to be planning her wedding to Kash, the love of her life. After the crazy year they've had, she's ready to settle down and live a completely normal life. Well, as normal as it can be. But there's something else waiting—something threatening to tear them apart.

Kash is ready for it all with Rach. Especially if all includes having a football team of babies with his future wife. With his line of work, he knows how short life can be, and doesn't want to waste another minute of theirs. But now his past as an undercover narcotics agent has come back to haunt him ... and it's the girl he loves who's caught in the middle.

Trent Cruz's orders are clear: take the girl. But there's something about this girl that has him changing the rules and playing a dangerous game to keep her safe. When his time as Rachel's protector runs out, he will turn his back on the only life he's known, and risk everything, if it means getting her out alive.

Molly McAdams grew up in California but now lives in the oh-so-amazing state of Texas with her husband and furry daughter. Her hobbies include hiking, snowboarding, traveling and long walks on the beach…which roughly translates to being a homebody with her hubby and dishing out movie quotes. When she’s not at work, she can be found hiding out in her bedroom surrounded by her laptop, cell, Kindle and fighting over the TV remote. She has a weakness for crude-humored movies, fried pickles and loves curling up in a fluffy comforter during a thunderstorm...or under one in a bathtub if there are tornados. That way she can pretend they aren’t really happening.