Today Sourcebooks Casa and Jackie Ashden have a treat for you. It's time to take an adventure up north to Alaska.

Deep River, Alaska boasts a fiercely independent though small population. The people who live here love it, and they don't much care what anyone else thinks. Until the day Silas Quinn comes back and tells them an oil reserve has been found below the town and now it's neighbor vs. neighbor. Some want to take the money and run, while others want to tell the oil company to put its rigs where the sun don't shine.

Hope Dawson never expected to leave Deep River. Her mom needs her. Her grandfather died and left her the local hangout to run. Her dreams of college and adventure died long ago. Until Silas comes back to town, holding the key to set her free. But freedom means she loses him again, and he's the one she's really always wanted.

Hope straightened up and as she did so, became conscious that the bar had fallen silent.

Weird. It could only mean one of two things. Either Joe or Lloyd had managed to get a punch in on Axel, or a stranger had walked in.

Dear Lord it had better be someone punching Axel. That was a whole lot easier to deal with than having a stranger turn up to disturb the already-disturbed populace.

But Axel was standing there uninjured, and it wasn’t a stranger.

It was much, much worse than that.

There was a man standing in the doorway. Massively tall, with wide shoulders, coal-black hair still long enough to curl at his collar...and those incredible eyes, the color caught between gold and green, like the glint of sunlight in the depths of the Deep River.

Her heartbeat caught, like an engine missing, her brain flailing around in shock.
Because it was Silas Quinn standing there. Silas, the inventive, imaginative kid who’d turned into a silent, brooding teenager after his mother had died. Who was the darkness to Caleb’s light and who had half the female population of their high school swooning over his quiet intensity.

Silas, whom she hadn’t seen since that night beside the bonfire, when she’d begged them not to go.
Silas, who’d offered to stay.

And whom you refused, because you wanted Caleb to be the one to offer. And he didn’t.

The burst of instinctive joy that caught her in the chest faded at the memory, a wash of an old, half-forgotten shame following hard on its heels.

Yeah, she’d refused and hadn’t been kind about it because she’d been grieving and lost, and it had been Caleb she’d wanted. Caleb, who’d left anyway.

The bar was silent, everyone staring at the man in the doorway, and after a second, the atmosphere changed, recognition setting in.

And the man shifted, and suddenly, like a blurry picture coming into focus, it became clear to Hope that the Silas standing there wasn’t the Silas that she remembered after all. And in fact, he had changed. He’d changed a lot.

His soaking wet clothing clung to shoulders wider than she’d remembered and a chest that was far more muscular and defined than it had been at eighteen. His features—almost pretty as a teen—seemed harder, more masculine somehow, his tanned skin drawn tight to the strong bone structure beneath it. She could see the white lines of scars here and there, and there were lines around his eyes and mouth, a darkness in his green-gold eyes.

The Silas she’d known had always been a serious type of guy. But she’d always known how to get a smile out of him. And those smiles...

She’d lived for those smiles.

This man looked like he’d never smiled once in his entire life. Like he didn’t even know what a smile was.

He ignored the people staring at him, ignored the sounds of his name echoing around the bar. Instead, he looked straight at her. “Hello, Hope,” he said at last, his voice as deep and gritty as the bed of the river that flowed outside the bar, and just as full of undercurrents.  come home to deep river

A part of her, the wild and joyful teenager she’d once been before age and responsibility had gotten the better of her, wanted to launch herself over the top of the bar and into his arms. Because above all else, Silas had been one of the closest friends she’d ever had.

She didn’t let herself get carried away by wild extremes of emotion anymore and certainly not with a bar to run and an emotionally fragile mother to look after.

And she certainly wasn’t going to hug the man who hadn’t visited her once in thirteen years.

Hope forced all the old emotions down and locked them securely away. Then she folded her arms. “Hello, Silas,” she said. “Long time no see.”

This giveaway is now over. The lucky winner is: Martha Lawson 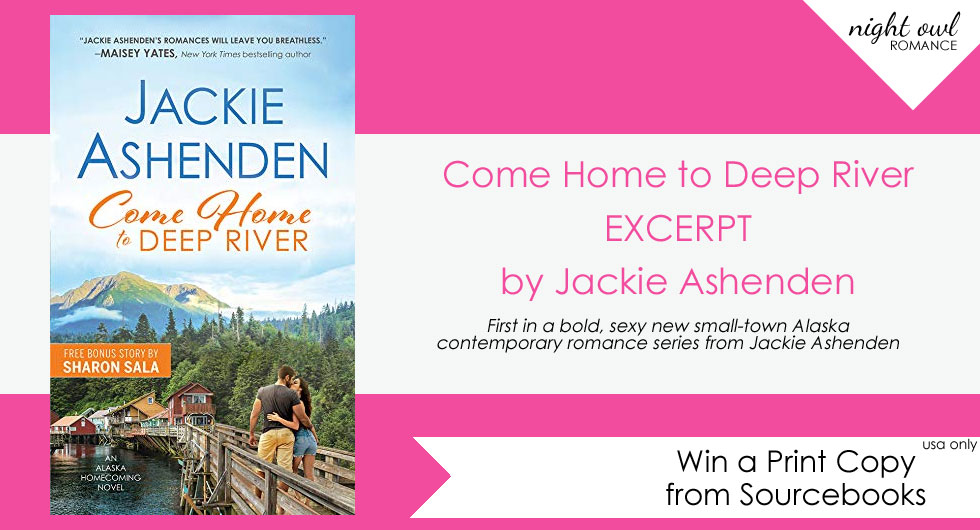