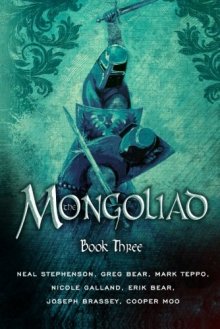 Checking in with Nicole Galland

Tell us how you feel about multi-author books! If you have not read one yet, would you and why?

Hi Nicole. Thanks for dropping over at Night Owl Reviews. I recently read your bio and saw that you have an awesome history in the theater sphere.

How has your involvement in theater shaped your writing?

Theatre is largely about character and dialogue, and those are my favorite things to write. I most enjoy writing scenes in which two (or more) characters have an emotional confrontation (a reunion, a falling out, a flirtation, a coercion). Scenes in which the action results from somebody revealing or reveling in their own character. Also on a technical level: my first drafts usually resemble scripts, with almost nothing but dialogue, subtext and basic “blocking” (characters moving toward or away from the furniture, each other, etc.)

Your books are character driven. Do you have a favorite character? Why?

Oh, that’s tough, that’s like saying do you have a favorite child! Gwirion, the fool in The Fool’s Tale, has a place deeper in my heart than anyone else because I was “in labor” with him for 14 years. I love Jouglet in Revenge of the Rose for reasons I can’t explain without giving away the plot twist. And I had a lot of fun with Lady Godiva (my next novel, Godiva, comes out in July from William Morrow) - I allowed myself to create a playful, subversive medieval female who isn’t a wench or a runaway. (I’m usually all about wenches and runaways.)

I read that THE MONGOLIAD started out being a social media experiment involving serial story-telling. What was it like to be part of the experiment and what did you get from it?

It was a wild ride! I’m honored to have been a part of it and proud that we pulled it off. My experience of it was a little different from the rest of the group, however, for three reasons: I was the only woman writer, I was the only writer not based in Seattle, and I was invited to join into the fold once the project had been broadly realized and started. So I’m not really in the strongest position to talk about the collaborative experience, except to say that my involvement proves how much faith everyone had in the concept. It was great fun to sort out story points together, and fascinating to watch other writers in process. Writers tend to be pretty private. Theatre is all about collaboration, but I was surprised how shy I often felt about my role in the collaboration of a writing project. (Being involved primarily over Skype while everyone else was in a room together probably has something to do with that.)

The serialized aspect was satisfying, because it meant we were all active spectators, if that makes sense. Early on I did a lot of hands-on editing of other people’s work (until I jumped in and started writing material myself). I really loved that. It was so satisfying to be editing a story that I was also writing. It felt comradely, but not in a way I can really explain. I’ve edited a lot professionally; this felt different. It was almost like we were developing our own self-sustaining creative ecosystem.

What did you think of the first draft?

Because I am a chronic re-writer, it terrified me that we were putting a chapter up on the internet to be read without knowing for certain how all the characters and themes were going to work out later on in the story. I’m very proud of what we did, but mostly when I think back on the first few months, I remember a mild sense of personal terror, because I wasn’t used to it. It turned out fine, of course; better than fine. People wrote fan fiction!  For characters whose futures we ourselves were not sure of!  I just couldn’t get my mind around that.

What was it like to work with a group of male authors on such an endeavor?

Ha! I bet any woman who has ever worked with an all-male team could answer that question at least as thoroughly as I can. :-) In fact, I don’t think I need to get any more specific than that.

To be honest, my “difference” was only partly about gender; it was equally that I was not practicing Western Martial Arts with them, that I was 3000 miles away and had never met any of them in person for the first 6 months I was involved. Even when I went out there and we all worked in the same room together, the difference was less about male-vs-female and more about tone, specifically martial-vs-anything-other-than-martial. The guys created the project specifically IN ORDER TO write the martial-prowess material. For me, those bits are a lot of work, but relationship-oriented scenes, especially involving humor, come naturally. Generally – not always, but generally – we all got to stay in our comfort zones and write to our strengths.

Please share with us one of your favorite authors. What makes them a must read for you?

Dorothy Dunnett! Her series about Francis Crawford of Lymond (“the Lymond Chronicles”) is utterly fantastic. It is clear that she takes delight in every single phrase that rolls off her pen, and she makes me want to do the same thing with my own writing. It’s smart, sexy, well-written, swashbuckling but ever so slightly ironic. Her prose is so sparkling, witty and lively that whenever I am having a bad writing day, I will open up one of her books to a random page and read a paragraph or two to refuel. Not to imitate her style – we are nothing alike in style, but oh how I admire her enthusiasm and rigor.

The Mongoliad - The Foreworld Saga, #3

The final book of the Mongoliad trilogy from Neal Stephenson and company tells the gripping personal stories of medieval freedom fighters to form an epic, imaginative recounting of a moment in history when a world in peril relied solely on the courage of its people.

The shadow of Holy Roman Emperor Frederick II hangs over the shattered Holy Roman Church as the cardinals remain deadlocked, unable to choose a new pope. Only the Binders and a mad priest have a hope of uniting the Church against the invading Mongol host. An untested band of young warriors stands against the dissolute Khan, fighting for glory and freedom in the Khan’s sadistic circus of swords, and the brave band of Shield-Brethren who set out to stop the Mongol threat single-handedly race against their nemesis before he can raise the entire empire against them. Veteran knight Feronantus, haunted by his life in exile, leads the dwindling company of Shield-Brethren to their final battle, molding them into a team that will outlast him. No good hero lives forever. Or fights alone.

Nicole Galland is the author of 3 previous novels: The Fool's Tale, Revenge of the Rose, and Crossed: A Tale of the Fourth Crusade. After growing up on Martha's Vineyard and graduating with honors from Harvard, she divided most of the next 16 years between California and New York City before returning to the Vineyard to stay. During those 16 years she variously made her living in theatre, screenwriting, magazine publishing, grad-schooling, teaching, temping, and random other enterprises. She is the co-founder of Shakespeare for the Masses, a project that irreverently makes the Bard accessible to the Bardophobics of the world. She is married to actor Billy Meleady.