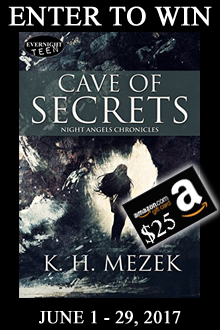 Enter to win an awesome $25 Amazon Card and an eBook from author K.H. Mezek!

Comment Question: If you had the chance to be all-powerful at the price of losing the man you love would you take it?

A demon force is taking over Oak Haven and people are dying in horrific ways. Somewhere beneath the city lies the hidden chamber and the Secrets to the Origins of Life. If only Sera can find it, maybe she can stop the violence. She needs her dad to help her and she’s certain he’s still alive. But in order to find him, Sera must make a pact with her nemesis, Fabian Gore.

Peter, the Night Angel has vowed to love and protect Sera, but even he can’t help her in this task. Nor can Jimmy, the human whom she knows she can trust. Only the “girl with crazy eyes” can lead Sera to her father. Without her dad, Sera doesn’t think she can go any further.

“Be careful who you love, it just might kill you.”

When Sera’s father is killed in a horrific accident, all he leaves behind is a mysterious key. Sera places the key on a chain around her neck and vows to avenge her father. Strange characters arrive in town including the otherworldly Night Angels, who claim to be sent for her protection.

Sera falls hard for one of them—exotic, arrogant Peter. But what if his promise of love is only a ruse to gain access to the key? As Sera’s connection to the key grows, so do her supernatural powers. Guided by clues left by her father, Sera searches for the hidden chamber beneath the city, hoping to save what lies within before the sinister mayor and his deadly followers drown humanity in a bloodbath.

14+ due to adult situations

All Sera ever wanted was to solve the mystery of her dad’s death and find out whether or not the Night Angel, Peter, really loved her. Now, there are bigger issues at stake. After being saved from death by the Night Angels, Sera returns to Oak Haven to find her brother, Salem, has been saved by her nemesis, the sinister Los Angeles mayor-to-be, Fabian Gore. Sera and her brother meet again in their hometown of Oak Haven as powerful denizens. And as enemies. Someone is channeling power to the Queen, imprisoned in St. Catherine’s Monastery. If she escapes, the Ancient Ones will rise up from their sarcophagi beneath churches throughout the world and wreak vengeance on denizens and humans alike.

To thwart the Queen, Sera has no choice but to form an uneasy alliance with Gore. Meanwhile, Sera’s power and her connection to the Key of Mystery is growing. Only she can open the Book of Angels. But whoever does that will become something that Sera never wants to be: the Seventh Angel. How can Sera solve her own problems when everyone else wants her to solve their problems as well?