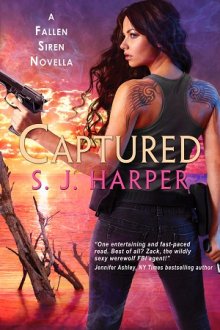 The author team of S. J. Harper releases the prequel to their Fallen Siren series.

She’s a Siren. He’s a Werewolf.

Their mission is redemption.

Emma Monroe is a Fallen Siren, cursed by the gods and banished to Earth for her failure to prevent the kidnapping of Persephone. She’s had many names and many lives, but only one mission: redemption. Now she works for the FBI and is on temporary assignment in Charleston. Solving this next missing persons case could be the key to ending her ancient curse—unless the temptation that’s her new partner gets in the way.

Zack Armstrong is a Werewolf. Tall, dark, and dangerous, he currently works for one of the bureau’s elite Child Abduction Rapid Deployment teams. In many respects the man is every bit as mysterious as his secret and perilous past. But there are two things he’s certain about, that he’s going to get his man and his woman.

When Zack finds himself suddenly shy a partner and a third child goes missing in Charleston, Emma goes from consultant to CARD team member in the space of a few hours. The abductions of the first two boys ended in murder, an outcome that neither Zack nor Emma can abide. As they race against time to track down the kidnapper and rescue the latest victim, they find themselves fighting something just as treacherous—a growing attraction that can’t be ignored or denied.

I’m floating. The water is warm. My arms move gently back and forth. I no longer feel the sun on my face. As much as I try to focus on the moment, to loosen the knots in my neck and shoulders, I can’t. Bits and pieces from interviews we conducted today keep rolling round and round in my head. I give up, turn over, swim laps until I can’t do it anymore. When I finally stop and come up for air, I’m breathless. My arms tired, heavy. The tightness in my shoulders relaxed. I squeeze the water from my hair. As I make my way toward the stairs I twist it up and tie it into a knot.

Zack is sitting poolside at one of the tables, jacket and tie off, the first few buttons of his shirt undone. He has a beer in his hand. His eyes are on me. The intensity of his gaze as I rise up out of the water brings heat to my cheeks. The glamour affects my physical beauty in that my true face is hidden. But my body is untouched. Breasts, hips, legs are of a level of perfection only a Siren can possess. The conservative one-piece black suit was chosen to play down my assets. If Zack’s reaction is an accurate measure, the suit isn’t doing its job.

I grab my towel from a nearby chair. “I thought you were going for a run.”

“I decided to call the hospital, check out Perez’s alibi.” He takes a swallow from his beer.

“And the hospital cooperated?”

“After I obtained and faxed over an order. Perez was at his wife’s side when the Boroson boy was being kidnapped. If the kidnappings are connected…”

“Then a solid alibi for one means he’s essentially got an alibi for all,” I finish. “Did you really think Perez was our guy?”

“Nope.” He takes another pull on the long neck.

A cocktail waitress comes over. I place an order for a vodka and tonic with extra lime. “What about Beverly Hamilton?”

“She’s a ball-busting bitch and I don’t like her. But I don’t think she’s a kidnapper.”

“Why is it that a woman who’s smart, sexy, and strong is automatically presumed to be a bitch?” My drink comes and I take a sip.

“It’s not automatic. You’re not a bitch. Don’t tell me you missed the fact that in addition to smart, sexy, and strong, Hamilton’s also mean.”

“Mean? What are we in junior high?”

“I’m a guy. We’re simple,” he says, doing his best to not look at the little bit of cleavage that’s showing.

I drape my towel around my neck before slipping on a hotel robe and cinching it up. “No comment. What we need is a common denominator.”

The sun has set. The waitress drops off menus.

S.J. Harper is the pen name for the writing team of Samantha Sommersby and Jeanne C. Stein, two friends who met at Comic-Con in San Diego and quickly bonded over a mutual love of good wine, edgy urban fantasy, and everything Joss Whedon.

Samantha Sommersby left what she used to call her "real life" day job in the psychiatric field to pursue writing full-time in 2007. She is the author of more than ten novels and novellas including the critically acclaimed Forbidden series. She currently lives with her husband and cocker spaniel, Buck, in a century old Southern California Craftsman. Sam happily spends her days immersed in a world where vampires, werewolves, and demons are real, myths and legends are revered, magic is possible, and love still conquers all.

Jeanne Stein is the national bestselling author of The Anna Strong Vampire Chronicles. She also has numerous short story credits, including most recently the novella, Blood Debt, from the New York Times bestselling anthology, Hexed. Her series has been picked up in three foreign countries and her short stories published in collections here in the US and the UK. She lives in Denver, CO where she finds gardening a challenge more daunting than navigating the world of mythical creatures.