Elise Sax takes readers on a ReadCation with her island romantic suspense. Stay at home and take in the tropics as her characters head up the pages. 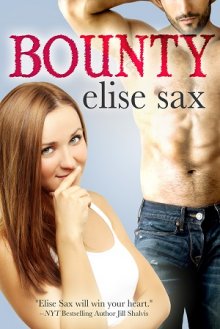 Abby Williams has got it made: First a new job as magazine editor in London, and now a trip to an exotic island to review a five-star resort with poolside service. Unfortunately, on day two of her vacation, Abby finds herself bound and stuffed into a burlap bag and dragged across two continents. And worse than that? Her hottie abductor has got her distracted. Maybe escape is overrated.

Iain Brodie is a muscle-bound mercenary. He just helped a despotic dictator take over an island. He's also Abby's kidnapper, and he has his own problems. Framed for a murder he didn't commit and a boss who’s out to get him, he has to face facts: Early retirement is out of the question and Abby Williams looks damned good in a burlap bag.

I picked up the phone. “I thought we had a deal!” I yelled at Harriman. But it wasn’t Harriman.

I felt feverish at the sound of his voice. A warm wave of wonderful washed up my body making me want to remove my clothes at the first available moment.

“I thought you were somebody else,” I stammered.

“Somebody you made a deal with, it seems. Should I be worried?”

I was out. I couldn’t think of what to say. He should be worried, and it was my fault. I had made a deal to his detriment. I was a drain on him, and he didn’t even know it. He kidnapped me, but I had alerted the authorities about him. The feds were breathing down his neck, and he was oblivious. He sold me to a Chechen warlord, and I sold him out. Way out. Clean out. Out to sea. Out of this world.

I had to come clean. I had to warn him. Warn him about the authorities and warn him about me. He would hate me. He would never call me Princess, again. My tongue grew thick, and my throat closed. I thought, optimistically, that I was having anaphylactic shock.

I worked as a journalist, mostly in Paris, France for many years, but I always wanted to write fiction. Finally, I decided to go for my dream and write a novel. I was thrilled when An Affair to Dismember, the first in the Matchmaker Series, was sold at auction to Ballantine.

Story ideas come to me day and night, and I'm inspired by my imagination and the news, especially weird news. I'm a plotter. I map out chapters, but sometimes characters have a mind of their own. That happened in book two of the Matchmaker Series, where it ended in a surprise. (Oh, have I divulged too much?)

I wish I was one of those superhero authors who write five or ten thousand words everyday, but I write in bursts. I'm trying to get more organized and increase my word count, but I'm not a fast writer. I regularly hound very productive authors to try and learn their magic recipes for high word counts, but I haven't managed to learn the technique, yet.

I write either at my desk in my office or in my bed. I listen to music while I write romantic or scary scenes, but for the majority of scenes, written (hopefully) with humor, I have the television on in the background. I love TV, and I write well while listening to the rhythm of banter.