The wonderfully creative Alexandra Ivy stops on over to share the start of a brand new paranormal romance series! 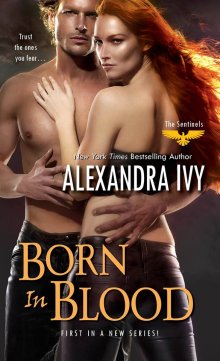 In a stunning new series, Alexandra Ivy lures readers into the dark, seductive world of the Sentinels--humans outcast by their hidden abilities, treading the line between life and death, good and evil, pleasure and pain. . .

In The Heart Of Darkness

Lies The Kiss Of Death

Unlike the other "high-bloods" in Valhalla, Callie Brown considers her abilities a gift, not a curse. But when she reads the dancer's final thoughts, she senses a powerful presence blocking her vision. This is no ordinary homicide. This is the work of a legendary necromancer who controls souls. A ravenous force that will put Callie's skills to the test, O'Conner's career at risk, and both their hearts on the line. . .literally.

PRIZES
Read the Short Story Below!

In order to enter the giveaway, the entrants will have to read the short story and then answer questions about the story at the end of the tour. The questions will be posted in the Rafflecopter widget.

The last 3 days of blogs will post the ENTIRE story for people that missed it throughout the tour.

It was the twenty guns pointed at Jayne Burnelli’s head that convinced her that this was a very bad, truly terrible idea.

Okay, there were also the six massive tattooed Sentinels who were sizing her up as if they were deciding how big a hole they needed to dig to hide her body.

Sweat trickled down her spine as she pressed herself against one of the large trees that surrounded the lake.

Dammit.  She’d known that it was going to be difficult to sneak into Valhalla.  Like most people she’d heard the rumors about the massive compound in the Midwest that was the central safe-house for those people too unique to live among normal society.

The high-bloods, as the freaks preferred to be called, had wrapped layers of magic around the vast home where witches, psychics, necromancers, Sentinels and God only knew what else roamed the grounds.

But Jayne had been determined to find a way past the protective dome that hid the buildings from view.

What choice did she have?  Her younger brother, Charlie, had been taken through the front door several hours ago, and she had tried calling him a dozen times without answering her phone calls.  How could she know he was settling in?

At fifteen, Charlie was ten years younger than her and was so kind, so innocent, so sweetly vulnerable that Jayne found it impossible to give up her role as protector.   She’d been doing it since he his talents started to manifest.

Her parents had been horrified when he’d started healing small animals, just with his touch.  And then later, when he’d reversed an infection that’d threatened Jayne’s life.  They’d tried to hide their distress at the fact that their son was a high-blood, as did the neighbors, but Charlie had always known that they’d feared him.   It was only natural for Jayne to step in and guard him from those who couldn’t appreciate his extraordinary gifts.

I began my career in 2000 under the name Debbie Raleigh, writing traditional regencies and now as Deborah Raleigh writing regency historicals.

Moving to paranormals has been a dream since I watched my first episode of Buffy. I hope everyone enjoys the Guardians of Eternity series.