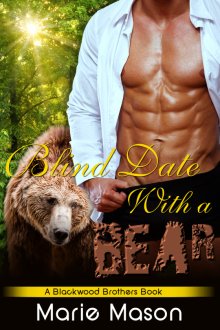 Blind Date With a Bear by Marie Mason

Readers who enjoy Rubenesque heroines and hot shifter males will want to check out this novella.

Blind Date With A Bear

When Quinn Blackwood thought it was time to go hunting for his mate, he couldn’t believe fate handed her to him on his very first blind date. His family thought it was an hilarious turn of events since the big bear shifter had been looking forward to sowing a few more wild oats before settling down with his one true mate. No one was laughing when Paige got the wrong idea and believed Quinn was just looking for a good time.

Paige Matthews had finally given into the cajoling of her co-worker and agreed to a blind date with the woman’s brother. Paige admired the family of bear shifters and had nursed a secret crush on the oldest Blackwood brother, Quinn, since moving to town. Even though she’d known the odds were against it, she was terribly disappointed that she wasn’t his true mate. She did however, decide to take him up on his offer of a good time, cause this good-girl craved the bear’s sweet loving.

Marie Mason loves romance. Writing, reading –it just depends on the time of day which she loves to do most. Having had a mydrid of unsatisfying jobs, and the gnawing, aching need to be a writer, Marie jumped head first into the world romance, without a safety net nor the ability to swim. She still works as a semi-unsatisfying and is just waiting for the day when her husband turns to her and says “Honey, when are you going to quit your job and write full time.”