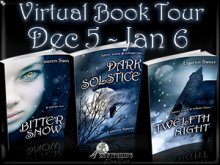 Whatever you do, don’t open the door.

All Gilly Breslin wants for her sixteenth birthday is for her best friend Kai to see her as more than just the girl next door he’s known forever. So when she receives a mysterious, romantic invitation to meet him at midnight, she knows she has to go.

But it’s St. Nicholas’s Eve, the ancient festival of Bellsnichol, when demons roam the dark winter landscape. Tradition demands that everyone in the tiny town of Bremerton stay inside, doors shut tight against evil.

Gilly thinks it’s just a quaint old superstition. She has no idea that a malevolent power has been unleashed in Bremerton—with Kai as its target. But when she answers her door at midnight, her romantic date turns deadly…and she’s drawn into an ancient web of fear and darkness that threatens everything she loves.

Gilly’s only hope is to enlist the secret guardians of Bremerton, who may hold the key to banishing the Snow Queen and her minions. But with the town erupting in violence and the demons’ power increasing as the winter nights grow longer, she’s in a race against time to stop them before it’s too late.

Winter demons have invaded the tiny town of Bremerton, and sixteen-year-old Gilly Breslin is the only one who can banish them. The only problem is, she doesn’t know how.

Digging through the town’s historical archives, she and her friend Niko piece together clues to an ancient ritual to send the demons back to the dark realm they sprang from.

But the Snow Queen has plans of her own. Her power is greatest at the darkest time of the year, and her evil influence is spreading insidiously through the town, leaving Gilly wondering if there’s anyone left who can be trusted.

The demons must be banished by Twelfth Night, or the town will be lost. But to do it, Gilly may have to sacrifice everything that matters to her—including her soul. 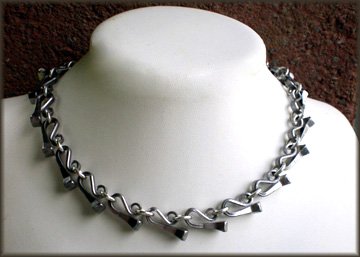 In folklore, iron protects against the influence of evil spirits. Handmade from real horseshoe nails and sterling silver by Connie Pardini of Wirestorm Creations (www.wirestormcreations.com), this necklace is a replica of the one Gilly wears to protect herself from harmful spells and illusions.

Open to US Shipping, retail value of necklace $80

I was born and raised in New Jersey, and books were a big part of my childhood. When I was about three and a half, I became obsessed with a Little Golden Book about a goat that gets a bucket stuck on its head. Since no one would read me the goat book as often as I wanted, I learned to read it myself—and haven’t stopped reading since. It was only inevitable that I turned to writing, so I could create more of the kind of stories that I like to read!

My favorite genres are mystery, sci-fi and paranormal/fantasy. I’ve always been fascinated by myths and fairy tales, and I love incorporating elements of ancient lore into modern stories. I have a Master of Fine Arts degree in Creative Writing from the University of Alaska Anchorage, and I currently live near Portland, OR, where I am a freelance writer and editor. My other esoteric skills include astrology, figure skating, and the ability to do a perfect split.