Excerpt: Beyond Power by Connie Mann

It's time to head to Florida for some romantic suspense. Plus you can enter to win the first book in this series. The second book is coming out eBook first. I have an excerpt from book two here for you. Enjoy!

When your heart's involved...

If you dare venture beyond Disney's magic and Miami's high-rises, you'll find yourself in Florida's untamed wilderness. A bush pilot and officer for the Florida Fish and Wildlife Conservation Commission, Josh Tanner is one of the tough cops needed to manage these rugged areas. And the minute he finds Delilah Atwood deep in the woods without a good explanation, he knows something is very wrong...

All the stakes are raised...

Delilah barely escaped her ultra-fundamental militia family years ago. Now she's back to save her sixteen-year-old sister, and no government man is going to stop her. Josh isn't going to stand by and watch Delilah risk her life, but unless he can get her to trust him, she may end up being the next victim.

If only humans were as predictable as the monkeys she’d come back to Ocala to study. Delilah Paige Atwood took a sip of her coffee and sighed. Expression carefully bland, she studied the patrons at the Corner Café while she uploaded her latest batch of photos and research notes using the free Wi-Fi. At least part of her plan had worked. No one appeared to have seen through her disguise or questioned the name Delilah Paige. Equally noteworthy, no one from her antigovernment, paranoid family had burst through the door with guns blazing, furious that she’d dared to come back to town.

It was the other part that worried her. She’d spent every morning of the past two weeks eavesdropping on the locals, and she still had no idea how to find her family. Her sister would be sixteen in two weeks, which meant Delilah was running out of time.

She shut down her laptop and had just tucked her field journals into their zippered compartment when the bell above the door jangled merrily. The whisper of awareness that slid down her spine told her without looking that Josh Tanner—“Hollywood” to his friends—had just walked in.

His eyes lit up when he spotted her, and that breath-stealing grin flustered her, just as it did. Every. Single. Time. While he ordered coffee, she reorganized her backpack, hoping he didn’t notice her ridiculous blush. After her isolated childhood, she’d spent years studying people’s social interactions like a research project, desperate to learn how to behave, what to say, how to relate to others. She’d learned to look people in the eye, go on dates, and even thought herself in love once, but every shred of her hard-won poise vanished whenever he walked in.

He…unsettled her. And intrigued her in equal measure.

Something about his kind eyes, his sometimes-sad eyes, whispered to a part of her she hadn’t known existed. To say nothing of his movie-star good looks and the intimate smile that made her fumble and stammer. Still, she kept showing up at the café, hoping for more of his fun, flirty banter, despite the uncomfortable fact that he was FWC, a Florida Fish & Wildlife Conservation Commission officer. His uniform alone should have sent her running, but somehow, the man wearing it had snuck under her defenses and tempted her to linger over her coffee cup.

You have more important things to do, her mind chided.

It was selfish, she knew, to put her wants above Mary for even a second, but she couldn’t make herself leave. Not yet. Ten minutes. No more.

“Good morning. How’s my favorite monkey researcher today?” Josh asked as he strolled to her table and turned a chair around. He straddled it, sipping the coffee he’d just purchased and eyeing her over the rim.

She raised a brow and sent him a cheeky grin. “I’m pretty sure I’m the only monkey researcher you know.” Was that really her voice, sounding all low and sultry?

“True, but you’re still my favorite.”

She laughed and gripped her coffee cup as she tried to think of something witty to say. He’d propped his sunglasses on top of his head, and she couldn’t help studying the khaki uniform that molded to him like a second skin. She dragged her gaze away from his chest in time to realize he’d been studying her, too.

“You have paint on your fingers.” He pointed.

Delilah glanced down at the traces of dark green she’d missed when she’d scrubbed her hands. “Thankfully, most of it’s on the camper.” She sent him what she hoped was a casual smile. “It’s done and it looks good, if I do say so myself.” Getting the camper habitable had been step one, so she and Mary would have a place to stay.

“I’m sure it looks great. Can’t wait to see it. So where are you headed today?”

Her stomach did a little flip. Did he really want to see her camper and spend time with her away from here? Or was that just Josh being a nice guy and making conversation? She’d never seen him flirt with anyone—except her. And he always seemed to end up sitting at her table. But chatting over coffee and inviting him into her home were two very different things.

She couldn’t begin to think about all that right now. “I figured I’d swing by Tanner’s Outpost and rent a kayak from your sister, see if I can track down one of the other monkey troops today. Babies are starting to arrive,” she added, grinning. She would also scout out the area, check if anyone had seen the Atwoods recently. She wasn’t overly optimistic they would tell her even if they knew, but she had to try. And she’d keep trying until she found them.

There were only two weeks left until Mary’s birthday.

The lucky print book (Beyond Risk) winner is: Colleen Conklin 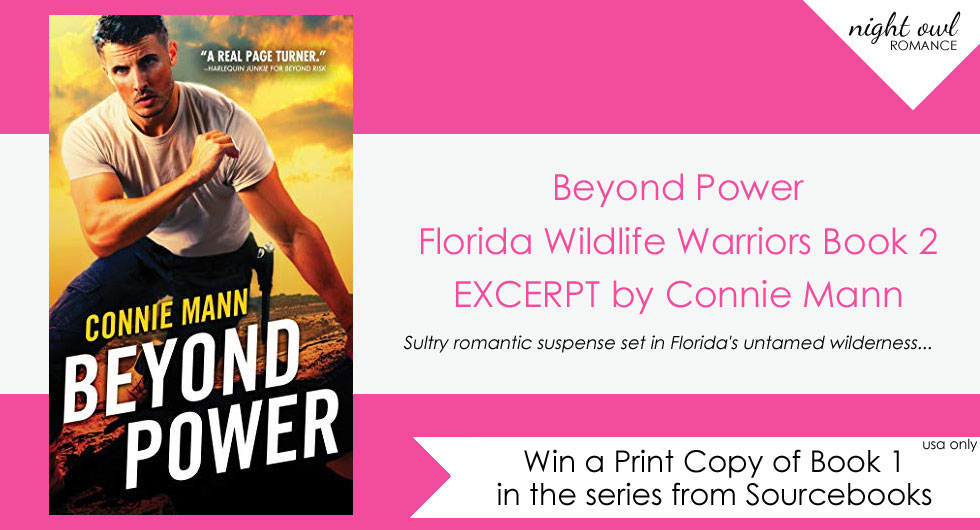