You Must See Flagstaff #Travel

In every book I’ve written, there’s a little bit of me in the heroine. On the other hand, my characters take on a life of their own once I put my fingers to the keyboard. In The Power of Love and Murder, Penny Sparks has experienced much more trauma and heartache than I have.  She lives in one of my favorite Arizona cities—Flagstaff. I thought it would be fun to compare our favorite things about the college, mountain town that sits at an elevation of 6,910 feet.

Brenda: I love the snowy winter.

Penny: I much prefer spring. Winter equates to Christmas and since I lost my family one Christmas thirteen years ago, I dread the winter. Although, this season I met Jake, so I might have to rethink that.

Brenda: There’s a Mexican food restaurant as you head out of town on Route 66 I enjoy.

Penny: Oh, yes, Mexican food, but I prefer the Kachina Café downtown. It’s cozy and has a patio out back.

Brenda: Flagstaff is a college town, and because of that I find the shops unique and fun. You can walk the narrow streets and encounter small eclectic shops as well as a haunted hotel.

Penny: And I work in that hotel. I won’t comment on the truth of that haunted reputation. I prefer to drive out of town and go up the mountain to the ski resort area. It’s beautiful up there any season. The food is good, too.

Brenda: Route 66 passes through town and next to it is the train track. The train station has been remodeled. The sound of the train rolling through and the whistle reminds me of nights in my dorm room in college.

Penny: I have to agree with Brenda on this one. I love the sound of a train whistle.

Brenda: The San Francisco Peaks are visible from everywhere. The highest point is Humphrey’s Peak at an elevation of 12,633 feet. It’s spectacular.

Penny: Although I haven’t been a fan of winter, the Peaks are every bit as beautiful as Brenda thinks, especially in winter.

For thirteen years, Penny Sparks has managed to hide from the political powers who murdered her family. When she unwittingly exposes her true identity, not only is she marked for death, but the people closest to her risk meeting the same fate.

Jake Winters is out of rehab and coming to grips with his demons. When he meets his sister’s roommate, Jake believes Penny might be that someone who can help him find life after rock star status…until her secrets blow up his world.

With a government agent turned hit man closing in on her, Penny and Jake race to expose the presidential contender behind the murders of her family. Even if they win the race with death, the murder that stands between them could end their hope for a new life.

Convinced she was born to be an artist, Brenda never took her love of writing seriously. And then one day, sometime after college, after marrying a man doing a stint in the army, and after the birth of her son, she found more satisfaction filling a blank page with words than an empty canvas with color.

Brenda and her husband are gypsies at heart having lived in six states and two countries. Currently, they split their time between the prairie in Northern Arizona and the RV life. At home or in the RV, she spends most of her time writing stories of discovery and love entangled with suspense. 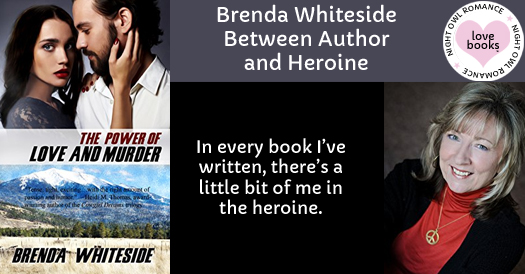