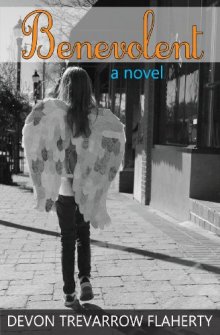 Today Devon is stopping over to share her book Benevolent and we get to do a fictional interview with her character Gaby.

Night Owl: Hello, Gaby. It’s an honor to be interviewing you.

Gaby: Thanks, Night Owl. I appreciate the opportunity to be heard.

NO: Well, let’s get right to it. You’re an oldest child, Gaby, in the book sense. You were published last winter and the new book is on its way for next spring. You’re not the cutest anymore, are you?

G: Shoot.  I wasn’t expecting that. [Gaby readjusts herself in her chair, clears her throat.] Yeah, I am the first book, so I’m not going to be the cutest for long; not going to get all the attention for long, either. Then again, either is this next book.

NO: You mean there’s another on the way? Already? How is that humanly impossible?

G: Oh, there’s eleven books on the way. Flaherty is a good juggler. And when you have ten years of down-time to prepare... Well, let’s see; the next book is about seven siblings returning to their mother’s funeral; then there’s the one about the sasquatch; and the one about time travel; and the one about levitation and circus trains… It should be an exciting next twenty years around here.

NO: Let’s just slow down a second. It hasn’t even been a year since the release of Benevolent. How do you think it’s going?

G: It’s going. We’re really coming up on that magical “one year” mark, under which nothing wonderful can be expected to happen. After that, I’ll probably hide in a man-made book-cave and eat warm chocolate chip cookies. But I can’t really complain. Sure, our sales are usually just under the two million mark on Amazon, but Benevolent now has three book awards and two website recommendations (from Readers Choice and IndieReader). Sales haven’t stopped, and there are still things that can be done.

G: It’s really hard work. [She sighs.] Although, don’t ask me. I just show up and look pretty; I mean, I was just minding my own business and my story’s already told. It’s Devon who has to do all the hoofing.

NO: So you get along with Devon?

G: Now, don’t go prying or trying to make my cry. Next thing you know you’ll be asking me about Snuggles the pug.

NO: [With a serious look,] What about Snuggles the pug?

G: Aha! No way, buster. I’m sticking the last question. There’s no dirt to dig up: Devon and I get along because we relate to each other. She’s nice. I’m nice. What could go wrong?

NO: Well then, tell me about Opal.

G: [Looks surprised.] Opal. Hah! She’s just a phase. I mean, The Family Elephant’s Jewels has something like nine sections in it, each from the point of view of a different character. So how could Opal compete with me? I got a whole book.

G: Nah. I like Opal okay. Plus, she’s got that lousy Toby to deal with. Meanwhile, I’ve got Mikhail… [She drifts off, dreamily.]

NO: So what did happen with you and Mikhail after page four-o-six?

G: Nope. Nope. You are not making me cry. I’ve gotta’ go. I have a pet shelter to raid.

NO: And Snuggles the pug? He’s involved?

G: Not gonna’ work! Bye! And thanks again!

Gaby LeFevre is a suburban, Midwestern firecracker, growing up in the 80s and 90s and looking to save the world one homeless person, centenarian, and orphan at a time. With her crew of twin sister, Annie, smitten Mikhail, frenemy Mel, and wanderlust friend Afentra, she’s a pamphlet-wielding humanitarian, tackling a broken world full of heroes and heroines, villains and magical seeds, and saturated with variations of the Northwyth legends. Beginning with a roadkill-burying nine-year-old and a gas-leak explosion, Benevolent follows Gaby from her formative years; through her awakening (as an imposing, legendary Queen nearly smashes her to bits under her steed’s hooves); through high school drama; a college career filled with an epic term paper, a building fire, and a protest-gone-bad; to Israel, a land full of romance and mysticism. It all ends back in metro-Detroit with a cataclysmic clash to resolve all good intentions. Accidents abound in Gaby’s life. As does love. And, thankfully, as does mercy. Meanwhile, Benevolent is woven with tales of The Queen, The Angel, Jaden the Great, and The Sage. Are they figments of John’s and Mercedes’ imaginative stories? Or are they something more? You’ll want to find out for yourself.

Devon is a writer in the Durham, North Carolina area. She is originally from metro Detroit, Michigan. She is a mommy, a wife, a hobby yogi, photographer, painter, and foodie. She has been writing seriously since her very earliest brushes with literature, and has published articles, poems, and photography in literary journals and magazines. She received a bachelors in philosophy and was an assistant editor and freelance editor for ten years, during which she wrote copy for and contributed to various research materials. She has been blogging since 2008, first with The Green Notebook and then with The Starving Artist. She is launching her career as a lifelong novelest with the independent release of her first novel, Benevolent. More is on the way.