Today we have the awesome MaryJanice Davidson stopping over to share her latest paranormal romance as well as her 5 favorite things.

Werebear shifter Annette Garsea is a caseworker for the Interspecies Placement Agency. When a selectively mute and freakishly strong teen werewolf is put in her custody, Annette has to uncover the young girl's secrets if she's to have any hopes of helping her. And not even the growling of a scruffy private investigator can distract her from her mission...

Bear shifter David Auberon appreciates Annette's work with at-risk teen shifters, but he's not sure if her latest charge is so much a vulnerable teen as a predator who should be locked up. All that changes when he, Annette, and her motley band of juveniles find themselves dodging multiple murder attempts and uncovering a trafficking cartel that doesn't just threaten the kids, but risks discovery of the shifters by the wider world of homo sapiens.

While David tore the intruders to pieces, Annette jacked shells into her .12 gauge. Twenty-inch barrel, six-round mag, and a place to attach a bayonet, not that she’d ever felt the urge.

She eschewed buckshot; slugs had the advantage of range, greater accuracy, would shred their target at 1,800 feet per second, and could knock a full-grown werewolf off all four paws. Slugs would also, to use the technical term, incapacitate like a bastard.

Annette stepped out of the room, socked the gun to her shoulder, fired at the

(sixty pounds, six-inch bite-wound radius, four feet at the shoulder, sees the gun but tries for my carotid anyway because he is a clear IDIOT)

werewolf, and moved slightly to her left as the werewolf’s momentum carried him another eighteen inches while the slug rearranged his coronary arteries.

To her left came a choked snarl that was chopped short. David had pulverized the werewolf’s vocal cords as he went in for the final strike. While she’d run for the gun case, he had killed the other one before he’d gotten a dozen feet from the car, now parked haphazardly at the far end of the yard.

“Oh, hell,” she said, popping the safety and inhaling. Blood, cordite, fear, blood, triumph, scones. “We live to bite another day, hurrah for us, but we’ve killed all our leads.”

Welp, as Mama Mac would say, better them than us. Then she’d bake a Bundt cake.

I would love a Bundt cake.

She turned to see David, all six-foot-plus of him, bloodied head to heels. He wiped his face with the back of a bloody hand, which was an exercise in futility. His dark hair was sticking up like he’d used gore for mousse, and he was all powerful arms and broad chest and long, blood-spattered muscles and, um, long…long…

Do not gape at the man like a slack-jawed yokel, you slack-jawed yokel! Shifter nudity taboos were, by necessity, far more relaxed than anything in the Stable world. But it still wasn’t polite to stare, no matter how fine the Shifter in question was. Quite the opposite; it could be construed as a challenge.

“I’m all right. Are you?” She stepped closer, and there was no way, no way to stop herself from reaching out. “Well, hell. At least one of them got his teeth into you.”

“Worth it.” Now he stepped closer. Don’t read into it. Maybe he’s worried you can’t hear him from two feet away. He’s so considerate! “Are you sure you’re okay?”

She looked down at her sweater. “None of this is my blood, David.”

“That shouldn’t be as hot as it is,” he said, and cupped the nape of her neck and kissed her. Neither the time nor place, her inner Girl Scout primly pointed out, but damn, the man had a nice mouth. Mmmmm…Skittles…

Just as suddenly, he drew back, leaving her gasping. “Sorry.”

He shook his head. “Christ, no. But I should’ve asked.”

“Is that an apology?”

“Well then. This serves you right.” And she kissed him back. She was pressed up against him, more blood smearing on her sweater, and he was right—it shouldn’t be so exciting. But it was. It didn’t matter that she’d never shifted. Some urges were difficult to deny. For example, the urge to slide her hands down from the small of his back to the springy muscles of his ass, because for some reason men often had the most wonderful asses and David was walking around with a top-notch booty. It wasn’t fair.

She broke the kiss. “Dammit.”

“Yeah, our timing sucks. And I’m glad you’re okay, and you were right to go for the shotgun, but…” He trailed off, then added shyly, “I was kinda hoping to get a look at your beast.”

“Next time.” She took advantage of their proximity to take a closer look at his wound, while resisting the urge to stretch up and taste the spot behind his ear. “Not deep, at least. But you’ve definitely got more holes in you than you did this morning.”

“Noted.” Fast was an understatement. It hadn’t been two minutes since they’d gotten out of the car. “Let’s go check on the—”

“Okay, okay! I get it. Caro, you were supposed to drag me clear of the fight. Well, fight’s over, so it’s okay for me to leave the room, so you can just…dammit!”

Annette turned in time to see Pat limping into the kitchen while Caro, in wolf-form, gently clamped her teeth around his calf to hinder his momentum.

“Annette, will you tell her to step off, for the love of all that’s annoying?”

She went to one knee and stretched out a hand to Caro’s wolf, a beast the color of midnight with eyes like hurricane lamps. Such unusual coloring for a gray wolf Shifter. “Thank you so much. You did exactly right. You can let him fend for himself now.”

Caro dropped the bite and made a noise that sounded suspiciously like Hmph!

“Pat, are you okay?” She went to her roommate and started feeling him for injuries. “Does this hurt? Does this? How many of me can you see? Does…ow!”

“I’ll slap your hand again if you keep that up. You know I’m hyperticklish. Why is there blood on your face? Were you so hungry you just started biting them as a biped? Because yuck and I’ll have to get to work on an intervention.”

“It’s just back spatter from the shotgun,” she soothed.

“On your face? In the shape of fingers? Like someone grabbed your face? With their fingers? And snogged you silly?”

“Don’t say ‘snogged’ like you’re British, and can we please realign our priorities?”

“You want to talk priorities? Bad enough I’m ruining my favorite apron to shield the eyes of the tender minors in our care—”

“Pat,” she said, exasperated, “literally no one cares about your dick.”

Giveaway Over: The lucky print book winner is: Victoria Sloboda

MaryJanice Davidson is the NYT and USA Today best-selling author of the UNDEAD and UNWED paranormal romcom series. Her books have been published in over a dozen languages and have been bestsellers worldwide. A former model and medical test subject (two jobs that are closer than you’d think), she lives with her family in St. Paul, MN. 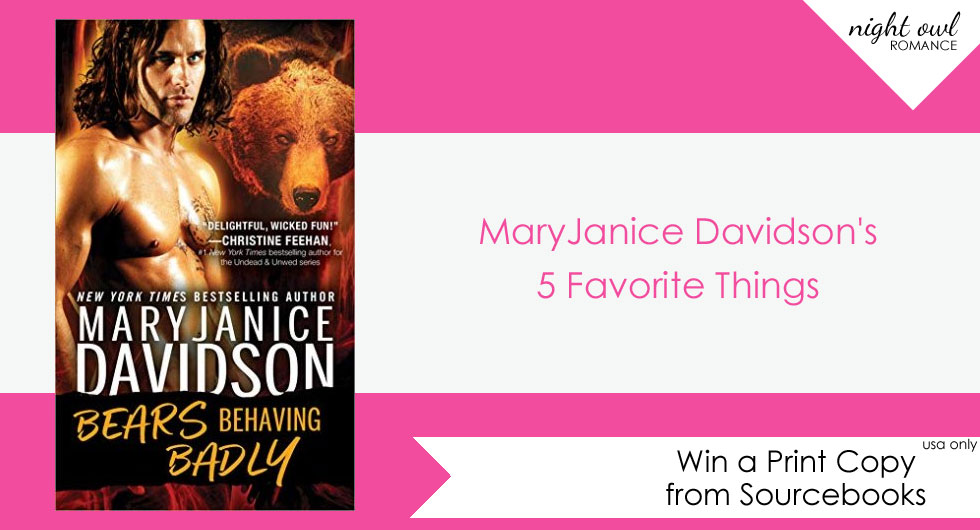