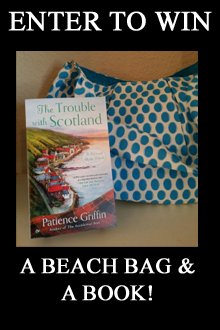 The Trouble With Scotland - A Kilts and Quilts Novel, #5

The quilting ladies of the Scottish village of Gandiegow are known to piece together more than just fabric . . .

Life isn’t going as planned and Sadie Middleton is rethinking her whole future. Thankfully one thing is staying the same: She’s able to share her love of quilting with her grandmother Gigi. The two of them enter a contest and win an all-expenses-paid trip to the Kilts and Quilts retreat in the Scottish Highlands. But their victory turns hollow when Gigi passes away before they can go. Sadie is grief-stricken, but her brother convinces her to take the trip to Gandiegow anyway.

There she meets a charming circle of quilters who remind her of her grandmother—and Ross Armstrong, a handsome fisherman who brings a smile to her face. Newly single, Ross intends to enjoy his freedom. That plan goes awry as he comes to know Sadie—and a surprising spark is lit. Too bad some well-meaning folks want to protect Ross from getting hurt again and are determined to keep him and the American lass apart. . . .

Next In the Series!

From the author of The Trouble With Scotland—a charming new romance set in the beautiful Scottish Highlands.

Christmas in the sleepy Scottish fishing village of Gandiegow this year is a time for quilting, patching up broken hearts, and rekindling an old flame...

After pulling herself out of a three-year fog of grief over the loss of her husband, Joe, Rachel is bringing their five-year-old daughter to see his hometown of Gandiegow and visit with his grandfather. But Rachel wasn’t planning on running into Joe’s cousin, the man who made her have second thoughts at the altar...

Brodie has come home to help his grandfather’s fishing business, but he’d prefer not to see Rachel. Although she did break his heart six years ago, the grip she has on him hasn’t faltered. If they can stop butting heads long enough and learn to overcome the past, they may find new love in the new year...