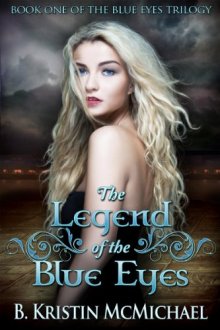 B. Kristin McMichael - The Legend of the Blue Eyes

Young Adult / fantasy / paranormal romance author B. Kristin McMichael joins us today. She has three books out and two in the Blue Eyes Trilogy.

I am here today with the guys from my book, The Legend of the Blue Eyes; All-American Devin, Turner the rebel, and rocker Andrew. Currently they are all in the running to woo Arianna over, and I had the chance to interview them to see which one is the perfect match for her. Will she choose her current protector and all around good guy Devin. Or might she like his complete opposite, the free-thinking rebel Turner. Or could she choose the last one vying for her, the mysterious Andrew? Which one would you choose?

Describe yourself in two words

If your house is on fire, what do you grab before running out?

D: Nothing. Where I come from if there is a fire, it usually means that there is a fight waiting to happen. You don’t stick around looking for something to take with when they might find you.

T: A pair of pants. It is so uncomfortable sleeping with clothes on.

A: The woman I am in love with. Wouldn’t want to leave her behind.

What is your best trait?

D: My ability to protect everyone. There is nothing in this world I have not seen and dealt with. Lord Randolph made sure I would be trained to be the best.

T: My versatility. You can never throw a wrench in my plans as they are always open to change.

A: I know more than either of these two. They might be more trusted in the night human world, but I have bigger ears. I hear everything.

What would you warn her when meeting your family?

D: Nothing to warn her about. She is my only family. My parents and siblings have been dead for years.

T: Be ready to see that all the good looking genes went my way. My brother is a bit hard on the eyes.

A: Meeting my family is not a good idea. My uncle tends to bite.

Turner: Being in a group or alone: group

Arianna Grace liked her boring, Midwestern, teenage life where she ignored the many unanswered questions of her childhood. Why were her parents dead? Why did she not have family? Where was she raised until she was five? When someone offers to explain it all, Arianna thinks she’s just getting answers. Instead, she is thrown into a world of night humans who drink blood.

On Arianna's sixteenth birthday, her world is thrown upside down when she changes into a vampire. Night humans, or demons, as some call them, live in normal society. Learning all of the new rules of a world she didn’t know existed might be hard enough, but it's further complicated by two former-friends that now want to help her take her role as the successor to her grandfather.

There is a war going on between the night humans. Sides have been taken and lines are not crossed. Four main clans of night humans are struggling for control of the night. Divided into two sides, clans Baku and Tengu have been at war for centuries with the clans Dearg-dul and Lycan. That is, until Arianna Grace finds out the truth; she’s the bridge of peace between the two sides. But not everyone wants peace. With the night humans divided, Arianna is now a pawn in the war between them. She must choose a side—her mother’s family or her father’s—and for once in her life, decide her own fate.

GRAND PRIZE:   Autographed paperbacks of Books One and Two with Necklace.

2ND PLACE:  autographed paperback of any one of B. Kristin's books (winners choice of book).

RUNNERS-UP:  Two (2) runners-up will each receive an eBook of book 1 "THE LEGEND OF BLUE EYES".

(If winner already has book 1 then it can substituted for book 2.) 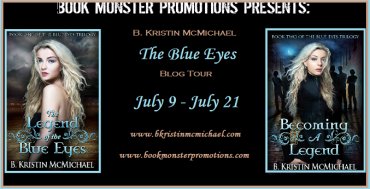 Originally from Wisconsin, B. Kristin currently resides in Ohio with her husband, two small children, and three cats. When not doing the mom thing of chasing kids, baking cookies, and playing outside, she is using her PhD in Biology working as a scientist. In her free time she is hard at work on multiple novels; as each day passes, she has more ideas for both current and future novels.