A long time ago, when FDW (husband) was in the Army, we spent three years in Germany. Because he played on every team the Army base fielded, we did more traveling than we might have. I think I saw every baseball and football field in Europe as well as the inside of every gym and bowling alley. Thankfully, we were able to take some side trips. Austria was my favorite country.

Jump ahead a couple of decades when our son played hockey. Our club hosted an Austrian team, and we housed the players. Hartmut, Harte to us, ended up spending several days with us. He and I grew close and became pen pals.

Jump ahead many more years and FDW and I finally got back to Europe. We chose Austria because of fond memories, and also because of our friendship with Harte. We stayed with Harte and his family in their centuries-old three-story home, and I fell in love with Austria all over again.

Where to start with why I love the country? It’s the food, the Alps, beautiful old churches, the food, cobbled streets of ancient cities, picturesque castles, the food, and so much more. Did you know you can sunbathe in the snow? They do that in the Alps. Did you know the Austrian language is actually German? The countryside is pristine with lakes and green meadows then suddenly there’s a hill with a castle at the top. Beyond the exquisite landscape, the main draw, other than the food, is the people. What friendly, warm, beautiful people.

When we arrived in Austria, it was the first time we’d met Harte’s parents. Because it was our wedding anniversary, they gave us the use of their cabin in the foothills of the Alps complete with wine and food. This is so typical of the Austrian people. Harte was our personal tour guide taking us to castles and churches, as well as shopping in Klagenfurt. Little did I know then, that the city would be the setting for A Legacy of Love and Murder, years later. Nor did I know one of the castles we toured would be the model for August’s inheritance.

So, when I decided to write my Love and Murder Series, my heroine in the first book, The Art of Love and Murder, found out her birth father was Austrian, and she was going to inherit an Austrian castle.

A Legacy of Love and Murder, book three, is set in Austria. Lacy, from book one, and her daughter, August got to take the trip, and I got to vicariously enjoy Austria again. Harte helped me with the language I needed for my book as well as other details of which I wasn’t sure.

My memories for the area and my fondness for the people, shine through the story of suspense and romance. If you have the chance to visit Europe, don’t miss Austria…or the food.

A LEGACY OF LOVE AND MURDER, Book Three of the series

Inheriting an Austrian Castle is an Alpine fairytale for August, until someone begins killing the heirs.

In Austria to meet her great-grandfather and explore his castle estate filled with priceless art, August Myer arrives to find he’s died suspiciously. As one of the heirs, her life is in danger, turning this fairytale Alpine adventure into a nightmare of unexplained accidents, neo-Nazi threats, and murder.

Inspector Tobias Wolf splits his time between his profession and fighting the spread of neo-Nazism. But when the beautiful, intriguing American crosses his path during a murder investigation, ensuring her safety challenges his priorities…and his heart.

When August learns the handsome inspector’s involvement with a major female Nazi is more than he’s admitted, and the death of her great-grandfather is somehow connected, she takes the investigation into her own hands. The outcome could be the death of both of them.

Brenda and her husband are gypsies at heart having lived in six states and two countries. Currently, they split their time between the Lake Roosevelt basin in Central Arizona and the pines in the north. Wherever Brenda opens her laptop, she spends most of her time writing stories of discovery and love entangled with suspense.

She blogs on the 9th and 24th of every month: http://rosesofprose.blogspot.com

She blogs about life’s latest adventure and has fun guests on her personal blog: http://brendawhiteside.blogspot.com/ 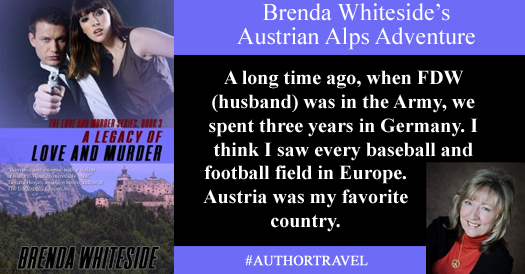