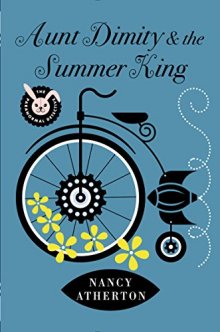 Aunt Dimity and the Summer King by Nancy Atherton

It’s June, the roses are in bloom, and the small English village of Finch may be in big trouble.  Two cottages are for sale, but something—or someone—is driving buyers away.  Has a developer targeted Finch?  Will property values skyrocket?  Will a wave of wealthy weekenders drive out the longtime locals?

Lori Shepherd has a lot on her plate—a brand-new baby daughter, her father-in-law’s impending nuptials, and a visit from her dreaded aunts-in-law—but she refuses to stand back and watch while big money destroys her beloved village.  Lori suspects that a local real estate agent is illicitly lining her pockets at Finch’s expense, but before she can prove it, she’s sidetracked by a chance encounter with eccentric inventor Arthur Hargreaves, dubbed the Summer King by his quirky family, is as warmhearted as the summer sun.  In his presence, Lori forgets her troubles—and Finch’s.

Lori snaps out of her happy trance when a series of unsettling discoveries shakes her faith in Arthur Hargreaves.  She stumbles across a detailed map of Finch in Hillfont Abbey.  An ancient feud between Finch and the Hargreaves family comes to light.  Arthur appears to be making secret deals with the shady realtor.  Is the Summer King as kind as he seems?

With Aunt Dimity’s otherworldly help—and her new baby girl in her arms—Lori mounts a crusade to save her village from the Summer King’s scorching greed.

Nancy Atherton is not a white-haired Englishwoman with a softly wrinkled face, a wry smile, and wise gray eyes. Nor does she live in a thatched cottage beside a babbling brook in a tranquil, rural corner of the Cotswolds.

She has never taken tea with a vicar (although she drank an Orange Squash with one once) and she doesn't plan to continue writing after her allotted time on earth, though such plans are, as well we all know, subject to change without notice.

If you prefer to envision her as an Englishwoman, she urges you to cling to your illusions at all costs--she treasures carefully nurtured illusions. She also urges you to read no further.

Because the truth is that Nancy Atherton is a dark-haired American with a generally unwrinkled face, a beaming smile, and hazel eyes, who lives in a plain house in Colorado Springs. She comes from a large, gregarious family (five brothers and two sisters) and enjoys socializing as much as she enjoys solitude.

So, if you are looking for her at a convention, don't look for a stately grande dame in a flowery dress. Look for a woman in jeans and sneakers who's bounding around like a hyperactive gerbil. That'll be me. And I'd love to meet you.