An Interview with Nate Barnes, hero of THE FIXER UPPER by Maggie Mae Gallagher

I am thrilled to be joining you on Night Owl Reviews today. I’d like to introduce you to the swoon-worthy hero of my new series, Nate Barnes. He’s the sheriff of the fictional town of Echo Springs, Colorado, and just as steady and dependable as the Rockies. I love him and fell for him the moment he strode onto the page.

I tend to create my characters by asking them questions, much like in an interview and letting them speak to me. Sometimes they do surprise me, or I end up having a character step onto the page I never intended to write but who won’t leave. In THE FIXER UPPER that character is Nate’s furry sidekick, Rufus, a hundred-and-fifty-pound Great Dane who bounded onto the page and wouldn’t leave. I adore him and all his crazy antics.

Below is my interview with Nate so you can get to know him a little better.

1. What is your name? Do you have a nickname?

Sheriff Nathaniel Benjamin Barnes, but my friends call me Nate. The officers in my station call me Sheriff.

2. Who is your best friend? What kinds of things do you do when you’re together?

That would have to be Miles Keaton. We grew up together, went to school together all the way through college. Lately, we haven’t gotten together much since he lives in Denver, but he’s moving back to our stomping grounds here in Echo Springs. It will be good to have him home.

3. If you have a family, how do you get along with them? If you don’t, are there people in your life you consider family?

The only family I have left is my sister, Beth. She lives out in Los Angeles. We’re close and call each other as often as we can.

4. Do you have a birthmark? Scars? Where is it/are they? How did you get it/them?

I have a scar just below my left shoulder from a routine traffic stop gone wrong. The suspect had a knife on him that I failed to see until he stabbed me with it. A few inches over and it would have severed an artery. I got lucky that day.

5. When you’re angry, what do you do? Where do you go? How do you deal with your anger?

I tend to take my frustrations out on the punching bag in the home gym I have in the basement of my house. My job requires me to stay physically fit, and in Colorado, you never know what the weather will be like from one day to the next, which is why I have the home gym. But punching that bag deflates my anger and, as a bonus, keeps me physically fit.

6. If you had to make me a meal right now, without going to the store, what would you find in your refrigerator to feed us?

Probably some leftover pizza from Papa Beau Pizza’s in town, stale bread, maybe some eggs, and beer. I tend to live at the station, and it’s easier to get my meals from the local spots. The Emporium has the best breakfast sandwich on the planet, and their burgers are mouthwateringly awesome.

7. What’s the one thing you’re afraid of losing?

My humanity and willingness to see the good in people. It’s easier here in our little Podunk town of Echo Springs than it would have been if I had stayed with the Denver PD. When you work in law enforcement, you get to see the worst of humanity every damn day.

8. What makes you laugh out loud?

Stupid criminals. There are more of them than you realize. And my dog, Rufus—he thinks he’s a lap dog and has the physical dexterity of an elephant on roller skates. At his last vet visit, the knucklehead weighed in at one-hundred-fifty pounds, which is typical for a Great Dane.

9. Has anyone broken your heart? Who was s/he?

Her name was Stacy. We met in college. After we graduated, we tried to make it work out in the real world. But she decided she didn’t want to be a cop’s wife. It happens. Shortly after we broke up, I moved back to Echo Springs.

10. What’s the one thing you want out of life that you don’t think you can have? Why can’t you have it?

A family of my own. I don’t come from the greatest upbringing. My mom was an alcoholic, and dad lit out before I was five. We’ve not heard from him since. And I worry that it’s not in my makeup, that I don’t have the capacity for it.

And here’s a sneak peek at the first meeting between Nate and his newest next-door neighbor.

Abby spent the next hour cleaning her new room as best she could for the night. She’d work on the full house and give it a proper cleaning come morning, but she’d spent the better part of the day in her Rover and could feel the onset of fatigue settling in her bones. There was a semi-modern bathroom across the hall, with one of those claw-foot tubs she’d take advantage of when she wasn’t dragging her feet and ready to go horizontal for eight hours.

Settled in for the night, she made herself a small picnic of her wine and cheese offerings and added hitting up the local market for all the essentials to her to-do list for the morrow. Her parents would only shake their heads if they could see her in her thermal pajamas, drinking chardonnay directly from the bottle that hadn’t even sported a cork, but a lid that twisted off.

She was toasting her own brilliance when she heard the creak of the front door opening. Grabbing her trusty nine iron, a little gizmo she’d inherited from an ex-boyfriend some years back, Abby cursed at her phone’s low battery.

“Figures,” she muttered under her breath.

She left her room and tiptoed down the stairs, her movements muffled by her thick socks. She rounded the corner, and a beam of light blinded her.

“Gah!” Screaming, she swung the iron, ready to take on her intruder. All the self-defense classes her parents had scoffed at hadn’t been for naught. Who knew that in a sleepy little mountain town, burglars and vagabonds were a problem? The golf club whizzed over the intruder’s head.

“What the?” a deep baritone barked.

She swung again, determined to fend off whoever the hell thought he could invade her aunt’s place with mischief on his mind. The shadowed outline of a large man loomed behind the beam of light. When he didn’t back off, only kept advancing, her internal panic button hit overdrive. The nine-iron connected with flesh with a thudded whack.

“Get out or I’ll call the police!” she swore, her pulse hammering, her grip on the nine-iron so tight her hand was fusing into a claw formation. She reared back to strike again when his next words halted the forward progression of her swing.

She blanched, almost dropping her weapon, but then thought better of it. What if he’d lied to disarm her and then would attack?

Nice try, buddy. She wasn’t falling for it.

“Prove it.” She wasn’t the atypical heroine who idiotically descended into the darkened basement, despite the light mysteriously not working, to investigate the strange noise. She’d studied horror films and knew she was not the dumb bimbo but the smart woman who survived. His indicating that he was the police was a sub-plot straight out of a B horror film and was precisely the type of thing the killer would say.

She raised the nine-iron into a defensive position as the man moved to her right, flipping on the overhead light while pulling a shiny silver badge from his belt. He held it toward her so that light reflected off the silver star. Blinking as her eyes adjusted, Abby wondered if she was dreaming. Cornflower-blue eyes studied her—she was dressed in her flannel pink pajama bottoms, tank top, and fluffy purple robe.

He was larger than the darkness had suggested, probably a good six-three, and lean. His dark midnight hair fell in curly waves to his jawline, which was covered in dusky stubble. There was a ruggedness to him, indicating that somewhere in his make-up he preferred life outdoors, and it showed. He reminded her of the men gracing the covers of the romance novels she’d hidden from her parents while she was growing up, and still hid from her colleagues.

She’d always had a bit of a thing for men in uniform, but the only defining mark that even suggested he was an officer was his black jacket with an emblem embroidered into the right shoulder. Otherwise, he looked like a mountain man, in a button-up, emerald flannel shirt and blue jeans that rode low over his muscular hips.

Then she focused on the badge. Oh, sweet heavens! The badge read: Sheriff, City of Echo Springs. Why did this have all the beginnings of a campy horror flick? Woman goes to the wilderness to find herself, makes acquaintance with the local law enforcement, and then the army of dolls stuffed inside the home come to life, possessed by a demon spawn from hell, to try to kill the heroine.

Thanks so much for giving me the opportunity to introduce you to the good folks in Echo Springs. And a big thanks to Night Owl Reviews for hosting me today!

Abby Callier is more in love with Shakespearean heroes than any real man, and she’s beginning to wonder if there is life for her outside the pages of a book. It doesn’t help that her esteemed parents tend to view her as they would one of their science experiments gone wrong. On the eve of finishing her dissertation, she escapes her staid existence to live in the house she inherited from her Great Aunt Evie in the small town of Echo Springs, Colorado. Because, let’s face it, when a woman starts comparing her life to horror films, it might be time for a break.

Sheriff Nate Barnes believes in law and order and carefully building the life you want. In his spare time, he has been remodeling his house in the hope that one day it will be filled with the family he makes. But Nate doesn’t like drama or complications and tends to avoid them at all costs. And yet, when Miss Abigail Callier, his newest neighbor, beans him with a nine iron, he can’t help but wonder if she might just be the complication he’s been searching for all along. It doesn’t hurt that he discovers a journal hidden away by the previous tenant and decides to use Old Man Turner’s advice to romance Abby into his life.

Abby never expected her next-door neighbor, the newly dubbed Sheriff Stud Muffin, to be just the distraction her world needed. The problem is she doesn’t know whether she should make Echo Springs her home, or if this town is just a stopover point in her life’s trajectory. And she doesn’t want to tell Nate that she might not be sticking around—even though she should because it’s the right thing to do, the honest thing—because then all the scintillatingly hot kisses with the Sheriff will come to an abrupt halt. Did she mention that he’s a really great kisser?

Praise for THE FIXER UPPER:

Visit her on social media here: 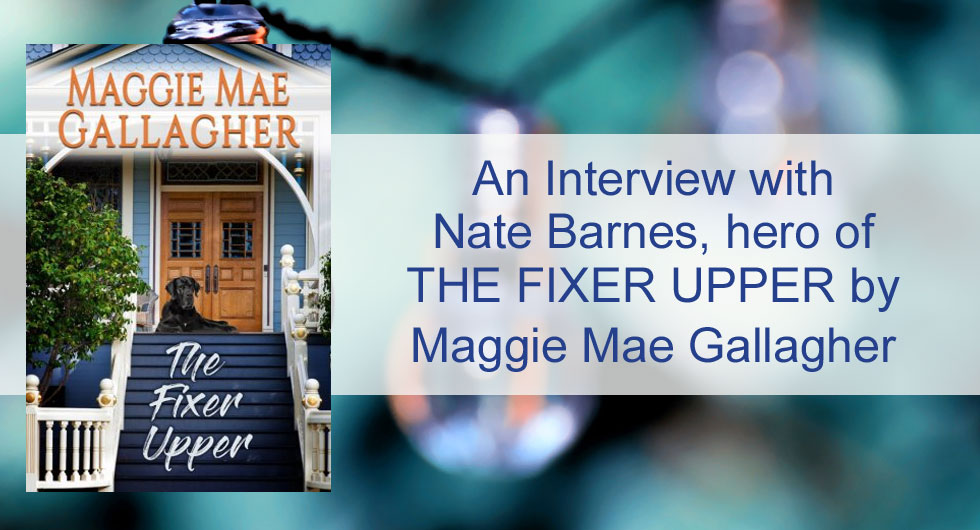