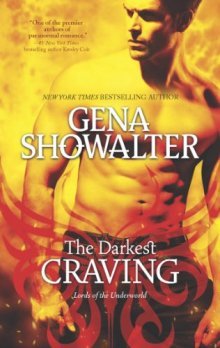 An Interview With Gena Showalter Aug 2013

Hi Gena, Thanks for joining us today! It has been years since I read your debut book and I'm thrilled that you are still going strong.

If you could live the life of one of your heroines, who would it be and why?

Josephina from The Darkest Craving.  She’s an intriguing mix of old world charm and modern sass.  She’s sweet, smart, witty—and Kane would do anything to protect her.  And by anything, I mean anything.  When he falls for her, he falls hard.  Fiercely, madly, deeply, passionately.  He would die for her.  That kind of dedication gets me every time!  She’s a lucky girl.

In The Lords of the Underworld series, which hero has been the most fun to write?

William, for sure.  He is gorgeous, fierce, smart-mouthed, irreverent, playful, narcissistic, and, well, heavenly.  At least to me LOL  He steps onto the page and steals the show.  Here are two snippets with him:

“You gettin’ so close to me ’cause you’re trying to taste my flavor, Willy boy?” he said to the warrior who had yet to back off. Teasing was better than raging. Or worse. Crying.

“Maybe.” William allowed a few more inches of space. “But you just ruined it. Flavor? Seriously? I like my conquests with a little more maturity.”

“I’m mature. I’m even old enough to plow your mom.”

“Please. She would eat your liver for lunch and your kidneys for dinner.”

“You won’t regret a pit stop like this,” William said, pushing his way through the crowded nightclub. He had to yell to be heard over the erratic pulse of rock screaming from large speakers. “It’s just what the doctor ordered—that, and a pair of testicles.”

For new to Gena readers, what should they know about your writing style?

I love to write, and I hope it shows!

The Darkest Craving - Lords of the Underworld, #10

Having endured weeks of torture in the bowels of hell, Kane wants nothing to do with his beautiful rescuer, Josephina Aisling. The half-Fae female threatens to awaken the demon of Disaster inside him—a beast he's determined to kill, no matter the price.

Josephina is hunted by a brutal enemy—her royal family—and Kane is her only source of protection. He's also the only male to ever set her aflame, and even he succumbs to the heat. But as they navigate the treacherous world of the Fae, they are forced to make a choice: live apart…or die together.

Gena is giving away the following prizes at the end of her tour:

RUNNERS-UP:  Two (2) runners-up will receive a paperback of THE DARKEST CRAVING

LORDS OF THE UNDERWORLD SERIES SPOTLIGHT:

Long ago, twelve immortals warriors – each more dangerously seductive than the last -- stole and opened Pandora’s box, unleashing the evil from within. Now they carry that evil within themselves. Violence, Pain, Death, Disease, Disaster, Misery, Doubt, Promiscuity, Defeat, Lies, Secrets, and Wrath. When a powerful enemy returns, they will travel the world in search of a sacred relic of the gods – one that threatens to destroy them all. 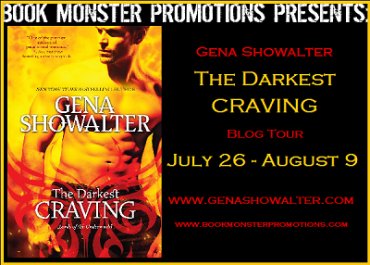 Gena Showalter is the New York Times and USA Today best-selling author of the White Rabbit Chronicles, Otherworld Assassins, Angels of the Dark, Lords of the Underworld, and several of other series.  She has written over thirty novels and novellas.  Her books have appeared in Cosmopolitan and Seventeen magazine, and have been translated in multiple languages.