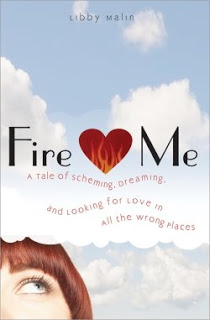 
Win A Free Copy of Fire Me by leaving a comment on this post. USA Shipping only. No P.O. Boxes.

You must be registered for any Night Owl Romance Newsletter and leave the front portion of your email address on your comment. -One Day Only- 5/13/2009

FIRE ME by Libby Malin

Fire Me tells the story of one day in the life of Anne Wyatt, a communications specialist at a business quality consulting firm in Washington, DC. But oh, what a day it is! Anne goes into work prepared to hand in her resignation because she’s landed a great job thousands of miles away. But when she learns that her boss plans to lay off an employee by day’s end and give that worker a generous severance package, Anne changes course and decides to go for the pink slip and the money instead. Sounds like a great plan…until co-workers, life, and love start getting in the way! By the end of this wild and crazy twenty-four, Anne’s learned a lot about herself, her choices in life and love, and how hard it is to plan for the future when you don’t really know what you want.

Fire Me is a comedy, but its underlying story is about pursuing your dreams. Because the book is filled with crazy antics and over-the-top stunts, I thought readers would enjoy an “interview” with the novel’s protagonist, getting her to answer the Big Question: what was she thinking?

Q. So, Anne, what were you thinking when you hatched this plan?
Anne: Well, I guess I was feeling more than I was thinking. I mean, my boss announces he’s going to treat the day as if it were an episode of Survivor, voting one of us off the island by the end of the day. So I really didn’t think my response to that kind of tomfoolery was out of line.

Q. Did you worry about long-term consequences—what if he gave you a bad recommendation?
Anne: I already had my new job sewn up without his recommendation. And I tried to choose stunts that would have credible “excuses” for them.

Q. But you “leaked” to a reporter that your boss was going to slash his big CEO salary and it became a news story—even though this wasn’t true. What was your credible excuse for that?
Anne: Hey, wouldn’t it be great to see more news stories like that--CEOs volunteering to cut their salaries? LOL! What you have to understand is that my boss had a reputation for doing crazy things to improve quality, to build a sense of “teamwork,” to motivate employees. He encouraged us to come up with new ideas. And this was just one new idea….that I accidentally let out to the press before I told him.

Q. What was the wildest thing you did that day?
Anne: Hmm….probably starting my own religion and trying to recruit followers in the office.

Q. Tell me about Ken—when did you start noticing he was interested in you?
Anne: Ken was still relatively new when this crazy day took place, so I hadn’t yet given much thought to getting to know him better. But when I saw he had a sketch of me he was working on—I wished I had taken the time to get to know him better and was sorry I hadn’t really given that idea a chance to grow. It was one of a long list of “wishes” I came to realize I had during that day.

Q. So you think the day itself and all the stunts triggered a kind of self-evaluation?
Anne: Oh, definitely. But when I look back on it now, I realize I shouldn’t be surprised it had that effect. I was really stepping out of my comfort zone that day. And any time you do that, I think you see things with a bit more clarity. You start seeing things you hadn’t seen before, from a different perspective perhaps.

Thanks for hosting me on the blog today! You can learn more about Fire Me and my other books by stopping by my website, http://www.libbysbooks.com/!