Five Ways You Know Your Reading a Regency Romance (and NOT a Victorian One) by Anna Harrington, Author of An Inconvenient Duke

The heroine has bare skin visible to the eye...not dressed in a tent of a dress that covers her from chin to toes to wrists. And no underwear! For men nor women. Low cut gowns, especially for the opera and theatre, mark the Regency period, so do other notorious (if apocryphal) fashions such as translucent gowns made see-through by wetting their shifts. (And we won't even get into all that black crepe Victorian mourning wear. For a year. Yikes!)

No trains. The fastest way between points for most journeys was still horseback, although boats were sometimes faster. I've always found it odd that when Regency couples elope to Scotland they always take a carriage when a boat from London or Greenwich would have been faster. (But then, there wouldn't have been all those wonderful chase scenes along the turnpike to Gretna Green--or dashing highwaymen. Speaking of which....)

An Inconvenient Duke
Lords of the Armory Book 1
Buy Now

Marcus Braddock, Duke of Hampton and former general, is back from war and faced with mourning the death of his beloved sister, Elise. Marcus believes his sister's death wasn't an accident and he's determined to learn the truth, starting with Danielle, the beautiful daughter of a baron and his sister's best friend.

Danielle is keeping deadly secrets of her own. She has dedicated her life to a charity that helps abused women—the same charity Elise was working for the night she died. When Danielle's work puts her life in danger, Marcus comes to her rescue. But Danielle may not need rescuing...

Dashing highwaymen! Don't you just love a story with a dashing highwayman who comes swooping in to steal goods...and the lady's heart? While these are a staple of Regency romances, they're missing in Victorian times...although, if truth be told, real highwaymen were nearly all gone by the Regency period, too, thanks to better roads and lighting. (But who can resist a romance about a dashing highwayman, preferably one with a mysterious scar on his cheek?)

Dukes and Earls and Viscounts, oh my! They're everywhere in a Regency romance. Even if they're not the hero (but I'd place a bet in the book at White's that the hero is more likely than not to be a duke), there will be clubs, taverns, balls, playhouses, and carriages brimming with them. In Victorian romances, the heroes are free to be that new sort of man who emerges—wealthy, self-made industrialists and capitalists—and the only barons who appear are robber ones.

And last…Christmas. Any mention of anything much more than simply attending church and having dinner (the really wild people celebrated Christmas with decorations of evergreen clippings and games of snapdragon) puts the novel into Victorian times. I'll admit--as a Regency writer, I'm jealous of those Victorians with their Christmas celebrations and traditions; most of my characters have to settle for some wild partying on Twelfth Night instead.

This giveaway is now over. The lucky print book winner is: Glenda M.

Anna Harrington is an award-winning author of Regency romance. Anna was nominated for a RITA in 2017 and won the 2016 Maggie Award for Best Historical Romance. The Secret Life of Scoundrels. A lover of all things chocolate and coffee, when she’s not hard at work writing her next book or planning her next series, Anna loves to fly airplanes, go ballroom dancing, or tend her roses. She is an English professor in Chattanooga, Tennessee. 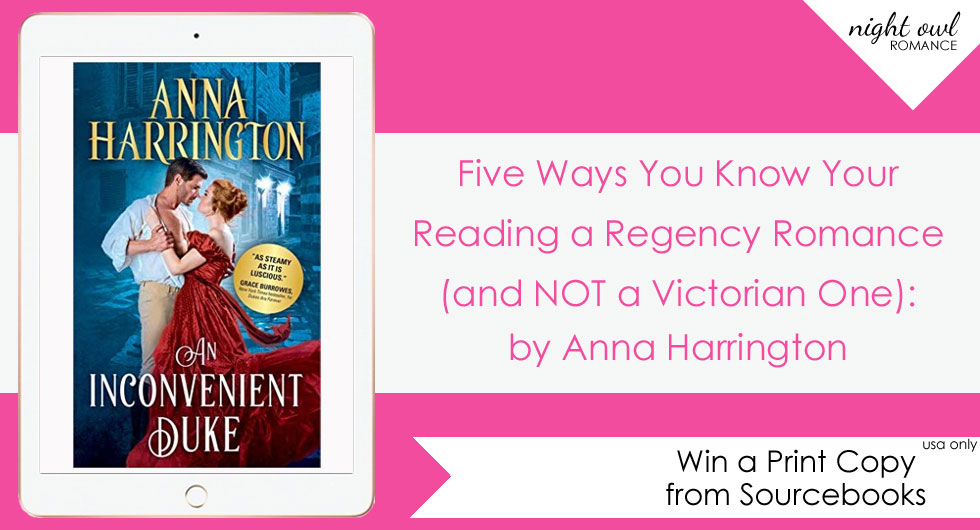