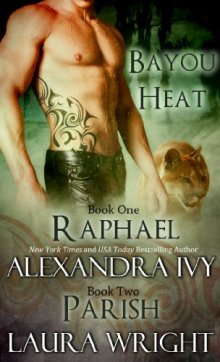 Moonlight added a sheen of silver to the Wildlands, emphasizing the untamed beauty of the thick cypress trees and the moss covered bogs that were a deathtrap to the unwary. Halting in the shadows, Bayon shifted from his golden puma to take his human form.

With hair the same shade of gold as his cat’s pelt, Bayon had leaf green eyes and a body honed to lean muscle. Breathing in deeply, he searched the darkness for any sign of danger. As a Hunter, it was his duty to protect the Pantera. Tonight his patrol included some of the most isolated parts of the Wildlands.

Expecting to be alone, Bayon narrowed his gaze as he scented a nearby puma. Within seconds a tall, dark haired Pantera stepped from behind a tree. Jean-Baptiste. The bad-ass, tattooed, heavily pierced Healer who’d all but disappeared over the past few months.

“Hey kitty, kitty. Lose your way?” Baptiste taunted, his mouth twisted into a humorless smile, those twin rings through his lower lip glinting in the stark moonlight overhead.

“Well look what the swamp dragged in.” Bayon folded his arms over his chest. “It’s been so long since I’ve seen you I thought you were dead.”

Jean-Baptiste shrugged, his starkly handsome face unreadable. “I have more lives than most.”

“Obviously.” Bayon arched a brow, trying to recall the last time he’d seen this elusive loner. Maybe six or seven tattoos ago? “Is there a reason you’ve been avoiding the village?”

Baptiste pulled back his lips to expose his elongated canines. “Do I need a reason?”

Bayon didn’t actually give a shit. If the man wanted to be an ass and avoid civilization, then fine. But the urge to yank the grim-faced man’s chain was irresistible.

“Not really.” Bayon gave the male a knowing wink. “There’s only one excuse for a man to disappear. Is she blonde? Brunette? Ah...a redhead.”

As expected, the Healer was immediately offended. “Do you ever think with anything but your dick?”

“Christ,” Baptiste growled, swiftly coming to end of his limited patience. “What do I have to do to get rid of you?”

“Why would you want to get rid of me?” Bayon demanded, his smile filled with a faux innocence. “I’m charming as hell.”

Jean-Baptiste’s hands clenched at his sides. As if barely restraining the urge to punch Bayon in the face. Bayon was used to such a reaction. His sense of humor wasn’t always appreciated.

“You’re a pain in the ass,” the Healer snarled, the skull ink running up his neck pulsing.

“That too,” Bayon readily agreed. “But mostly charming.”

The male shook his head. “Go the hell away.”

“Not until you tell me which lucky female you have hidden in your cabin.”

The man stepped close enough for Bayon to feel the fevered heat of his temper. “Not. In. The. Mood.”

Okay, then. Bayon held up his hands in a gesture of peace. Even he knew when he’d pushed things too far.

“I take it back.” He offered a rueful grin. “Any man getting laid would never be in such a pissy mood.”

“You have no idea,” he said, his voice gruff.

“Hey, to each his own.” Bayon stepped forward to clamp his hand on his packmate’s shoulder. “Just know...”

“We’re there for you,” Bayon said, his sincerity unmistakable. The Pantera stood together. Always. “Whatever you need.”

“Yeah man, I know.” Jean-Baptiste lowered his head, his muscles tense with a hidden emotion. “I know.”

In the depths of the bayous lives a secret race of puma shifters. The creation of a powerful magic, they have lived in peace until the threat of extinction drives them to seek the world beyond their homelands. Now the Pantera must discover the answer to their dying magic and halt an ancient enemy before it can destroy them all.

The brilliant and dangerous diplomat of the Pantera shapeshifters, Raphael has devoted his life to discovering the key to the infertility that is threatening the extinction of his puma race. Creating a vast network of spies worldwide, he never expected to discover that the answer might be beneath his very nose. But when Ashe, a beautiful human female, crosses his path, his most primitive instincts are stirred. Unable to resist, he takes her to his bed, and is shocked when she becomes pregnant with his child. It's a miracle that might prove to be the salvation of his people, but only if he can keep her safe from the mercenaries determined to kill her.

Untamed and undeniably sexy, Parish, leader of the Pantera hunters, rarely leaves the magic of the Wildlands to deal with the humans he despises. But with the prized and risky Pantera birth on the way, puma shifter, Parish must travel to New Orleans to find and bring back a human doctor. The moment he sees the lovely, talented and all too human Dr. Julia Cabot he cannot resist the wild, potent drive to make her his. Betrayed and destroyed by love, Julia will not let her heart choose her path again. But as she and Parish fight to save the life of an unborn child, a fierce and overwhelming bond develops between them, threatening her frozen heart with the secret hope and ultimate temptation of love and family.

I was born and raised in Minnesota. It’s where my love of all things green, wet and grown in the ground comes from. As you read above, before writing I was an actor, singer and dancer, specifically a BALLROOM dancer - an instructor and competitor as well. That work took me to many places like New York, Ohio and Wisconsin. I live in Los Angeles now, but I’m always thinking about greener pastures – literally.

I began my career in 2000 under the name Debbie Raleigh, writing traditional regencies and now as Deborah Raleigh writing regency historicals.

Moving to paranormals has been a dream since I watched my first episode of Buffy. I hope everyone enjoys the Guardians of Eternity series.