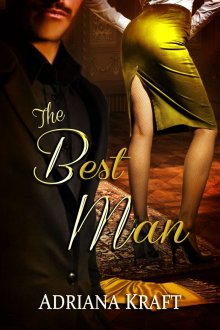 Adriana Kraft - The Best Man ~ and a Very Bad Girl.

“Slut!” “Whore!” “Sinner!” Kitty Paige is none of these things, but she remembers hearing these epithets hurled at her when she was little, and they can still sting. Does she let that stop her? Never!

When Kitty first showed up on our blank screen and started letting her story unfold, she made us nervous. She’s really out there – she likes her sex raw and edgy, she doesn’t want to limit herself to a single partner, and she goes out of her way to shock. Her opening scene – um, not gonna give it all away, let’s just say she opens her story with a possibly inappropriate partner – turns out to be a huge mistake, not one of her best cougar moments. But even a bad girl’s mistakes can open the door for other opportunities.

Will readers identify with her? Have we made them want to be Kitty Paige? They probably won’t want to make some of her mistakes, but we’re betting they’ll want to have some of her adventures, and for sure they’ll think Jared Jacobs is going to be worth it.

I’ve been in love with Jared Jacobs since we started writing this book. The first book I ever tried to write? After I read Gone With the Wind in high school and saw the movie, starring Clark Gable, I started re-writing the ending so Scarlett wouldn’t lose him. Yup, you guessed it – Jared is modeled after Clark Gable, down to the very sexy mustache, and he’s just as much a bad boy as Kitty is a bad girl.

These two characters sizzle together. We could hardly get words on the page fast enough to capture their story. They deserve each other – and, they’ll both have to change, if they’re going to make it work.

Will they have to stop being bad? Never! But I’m not gonna give away just how their HEA solves this dilemma. I think readers will love the ending!

Here’s the cover, blurb, and an excerpt that gives a taste of Kitty’s perspective. For a peek into Jared’s M.O., you can check out another excerpt at this LINK on our website.

Bad boy meets bad girl – is that all there is?

Passionate, hard working and every inch a business woman, Chicago realtor Kitty Paige likes her sex raw and edgy, and sees no reason to limit herself to just one man. Never married and not quite forty, the striking blonde has successfully raised her daughter, Susan, and is already pushing her new-found freedom to the limits.

Wealthy commodities middle-man and race horse owner Jared Jacobs is father of the best man at Susan’s wedding. He is smitten by the vision in yellow who exudes sex as she escorts her daughter down the aisle. Also single, the handsome mustached California ranch owner with mischievous eyes views his sex life as a series of splendid love affairs, and sets out to make Kitty next on the list.

Together and apart, their chemistry is explosive, and their sparkling repartee and steamy sex catch both partners by surprise. Jared is first to recognize he’s fallen in love. When Kitty panics, can Jared finesse his every move and reel her in?

Kitty lifted her chin as soon as the broad-shouldered mustached man headed in her direction. She knew what he wanted. He’d been studying her much of the afternoon and evening. She was surprised it took him this long to come after her.

She offered him a thin smile. How many times had he undressed her in his mind? Maybe as often as she’d undressed him. He was easy to look at. Probably late forties, early fifties at most.

Fit. No pot belly, which she despised. Graying around the temples. Square chin and a cute mustache. Kitty shivered slightly, imagining how that Clark Gable mustache would feel rubbing against sensitive spots.

She checked her watch and grimaced. Too bad she was catching the redeye back to Chicago – there wouldn’t be time to satisfy her mustache curiosity.

Here’s where to find us on the web:

Adriana’s Author Pages at Amazon.com and All Romance Ebooks