Win autographed print copies of HUNTED and ADEN (or eBooks if winner prefers), plus $30 Amazon gift card! Entry and date information below.

D. B. Reynolds continues her Vampires in America series. 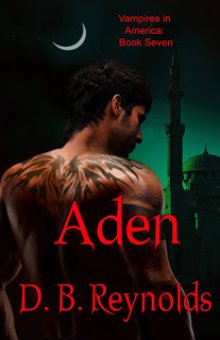 Driven by the demons of his past and the power of his vampire blood, Aden is determined to become the next Lord of the Midwest.
But as powerful vampires line up and the battles begin, Sidonie Reid walks into his life with a challenge he cannot ignore.

Vampires are running slaves out of Chicago, and Sidonie wants Aden to shut them down, permanently!

POWER, it comes down to this . . . those who have it, those who want it. REVENGE, the need for it is a fire in the soul, a goad for the unwise. HUNTED, the fate of the foolish when they think to become the hunter. Power . . . Revenge . . . Hunted. The Lord of the Midwest is dead, and the powerful vampires of North America are gathering to choose his successor. The Vampire Council will be there to oversee the competition and to keep the violence to a bloody minimum, including Raphael, who will do whatever it takes to ensure the victor is a vampire he can trust. But someone is determined to stop Raphael and his mate, Cyn, from ever reaching Chicago, a hunter who may soon become . . . the hunted.

THE BADLANDS of SOUTH DAKOTA . . . haunting landscapes, legendary outlaws, and . . . vampires? LUCAS DONLON, Vampire Lord, is one of the most powerful vampires in North America and beyond. Charming and irreverent to his friends and lovers, he enjoys everything about his life as a vampire. But when a neighboring lord makes the mistake of declaring war, he quickly discovers that Lucas is every bit as lethal as he is charming. KATHRYN HUNTER doesn’t care about powerful vampires or their wars. Her baby brother is missing and she will do anything to find him, even if it means going against both her FBI bosses and the local vampire lord. But Lucas Donlon has other plans for the lovely FBI agent who’s landed on his doorstep. Waging war against their enemies and each other, Lucas and Kathryn will risk everything to keep the most deadly vampire war in hundreds of years from engulfing every vampire, and human, in North America.

Washington, D.C. . capital of an empire. Powerful. Exhilarating. Corrupt. And in the shadows . vampires far older than the nation itself.

A power unto himself, Duncan has served at Raphael's side for a hundred and fifty years. But long laid plans have finally borne fruit, and the time has come for Duncan to leave Raphael and tackle the greatest challenge of his life. He will face treacherous vampires and murderous humans. He will rock the halls of human power if necessary. But Washington, D.C. will be his.

Emma Duquet cares nothing for vampire politics. She just wants to find her missing roommate and best friend, Lacey. But Lacey's been playing with vampires of a particularly dangerous kind, and Emma will have to deal with the new vampire in town if she's going to find her friend.

Battling powerful enemies who will stop at nothing to keep their secrets, Duncan and Emma will dig beneath the corruption and depravity that is Washington, D.C. and uncover the most heinous conspiracy of all.

This is part of a series, but can stand-alone.

The Pacific Northwest . . . home to lush forests and constant rain, to lumberjacks and computer geeks, especially those of the vampire kind.

Sophia, beautiful and deadly, has spent the last hundred years dancing her way through the balmy nights and hot-blooded men of South America. But when her Sire sends an urgent summons, Sophia rushes home to Vancouver only to find he has disappeared, leaving nothing behind but three dead vampires and a letter with Sophia's name on it.

Colin Murphy, a former Navy SEAL, came to the Northwest seeking a quiet place to heal the scars earned in more than a decade at war. But when someone starts killing local vampires and torturing their mates, Colin takes on the mantle of a warrior once again as he sets out to find the killers and do whatever it takes to stop them, even if that means hunting with vampires.

Following her Sire's trail of death to a small town in northern Washington, Sophia unexpectedly discovers the heat of a South American night in Colin's arms. But too soon Sophia and Colin find themselves in a race to uncover the killers before the next dead vampire becomes Sophia herself.

New York City vampire Rajmund Gregor is the undisputed master of The Big Apple. He bows to no one but his Sire, the Vampire Lord Krystof, who has ruled the Northeast for hundreds of years. But when Krystof summons Rajmund to his headquarters in Buffalo, Raj finds his master slowly descending into madness and his territory crumbling around him. Raj is the only one of Krystof's children strong enough to seize power, but he'll have to save his master before he can destroy him. Several women have gone missing and the local police are convinced a vampire is behind it. Is Krystof so lost to reality that he's capturing and murdering human women? Is a rogue vampire moving into Krystof's territory for the kill? Or is it something far more insidious, something that could threaten the existence of vampires everywhere? Sarah Stratton is living a lie. Her past holds a secret she shares with no one-not even her good friend Cynthia Leighton, the West Coast vampire lord's mate. It's a secret that could destroy her carefully constructed life as a professor at a Buffalo university. It's also a secret that could save the lives of the missing women. To save them, however, she must enter Buffalo's vampire community and put herself into the care of Rajmund Gregor. But can she trust Raj, the dangerously seductive vampire who wants to lay claim to far more than her secrets?

Houston, Texas-Cowboy boots, baseball and journeys to the stars . . . right? Wrong. Because Houston is also home to Jabril Karim, one of the eight powerful Vampire Lords who control all of North America. And as Private Investigator Cynthia Leighton will soon discover, not all Vampire Lords are created equal. For Jabril is the face of evil in the new world, a vampire who values no life but his own, who enslaves those he desires, steals whatever he covets and destroys anyone who stands in his way. Running from L.A. and its seductive Vampire Lord, Raphael, Cyn sees the Houston job as a welcome refuge, a place to get away and heal her broken heart. But Texas will be no vacation. For in Jabril Karim, Cyn will confront a true enemy, one who will go to any lengths to satisfy his lusts, enrich his coffers and expand his power. Fighting for the lives of two young sisters, Cyn's journey will take her through the streets of Houston and back to L.A., where the human police are determined to bring Raphael down for the murder of one of their own. But the danger doesn't end there. For Jabril has set his sights on Cyn, and he will stop at nothing to have her.

Malibu, California-home to rock-and-roll gods and movie stars, the beautiful, the rich . . . and vampires.

Powerful and charismatic, Raphael is a Vampire Lord, one of the few who hold the power of life and death over every vampire in existence. Thousands call him Master and have pledged absolute loyalty on their very lives. But when, in a brazen and deadly daylight attack, a gang of human killers kidnaps the one female vampire he'd give his life for, Raphael turns to a human investigator to find his enemies before it's too late.

Cynthia Leighton is smart, tough and sexy, a private investigator and former cop who's tired of spying on cheating spouses and digging out old bank accounts. When Raphael asks for her help in tracking down the kidnappers, Cyn's happy to accept. But she soon realizes her greatest danger comes not from the humans, but from Raphael himself.

Battling Russian mobsters and treacherous vampires, and betrayed by those they trusted, Cyn and Raphael find themselves fighting for their lives while caught up in a passion of blood and violence that is destined to destroy them both.

D.B.Reynolds is the award-winning author of the popular Vampires in America series, as well as other paranormal fiction. She lives with her husband of many years in a flammable canyon near Los Angeles, and when she's not writing her own books, she can usually be found reading someone else's.