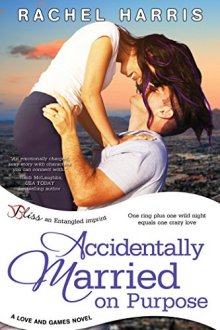 Accidentally Married on Purpose - A Love and Games Novel

One ring plus one wild night equals one crazy love

Sherry Robicheaux loves men. She loves love. And she loves an adventure. So when she meets a mysterious man while working backstage at a country music concert in Vegas, she’s all about what’s happened in Vegas staying there.

Country music superstar Tyler Blue just wants a weekend of anonymity…though there’s something about the spunky waitress with the streaks of purple hair that tempts him like no other. Until the next morning, when they both wake up with fuzzy memories…and rings on their fingers.

Convincing Sherry to maintain the ruse for his public image isn’t the hardest part—it’s reminding himself that their time spent playing husband and wife in her small town of Magnolia Springs can’t last. Tyler’s first love will always be music—and the road is no place for a sweet downhome girl. 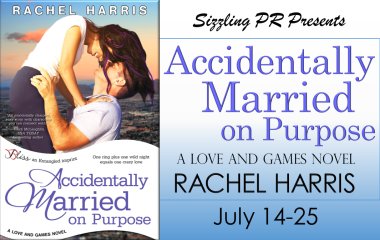 She tugged open the door and barely got a foot past the threshold when a young woman appeared out of nowhere. “Are you Sherry?”

“Jesus, Mary, and Joseph!” Sherry clutched her chest, panting as she glanced around the front yard. “Were you, like, hiding in the bushes?”

“Are you Sherry?” the woman asked again, her blond head bobbing as she consulted her phone. She nodded. “Yep, it’s her.”

Before Sherry could respond, or ask whom she was speaking to, an older man materialized with a literal flash.

Blinking in surprise, she stared in confusion at the camera in his hand. Angelle clasped Sherry’s shoulder and whispered, “Are you in some sort of trouble?”

“Uh, not that I’m aware of,” she whispered back.

Angelle’s eyes narrowed. “Excuse me, what exactly is this about?” Hand on jutted hip, her southern manners and newfound feisty personality made for an interesting combination.

The blonde held up her palm. “We’re from Country Insider and just want the exclusive scoop about her recent trip.” Behind her, the cameraman flashed some type of official-looking badge.

“Exclusive scoop?” Sherry asked with a laugh. “Do your readers really want to know the eating habits of roadies and crew members? Because I hate to tell you, sweetie, I never met Blue. If you’re looking for dirt, you’re barking up the wrong tree.” And flew a heck of a long way for nothing.

Instead of looking disappointed, the woman rolled her eyes. “Sure you didn’t. It was another purple-haired waitress from Louisiana who married him.”

“Married?” Sherry and Angelle asked at the same time. They looked at each other, and Sherry lifted her shoulders to say, I don’t know what she’s talking about. It wasn’t a total lie, either. But Angie’s gaze grew suspicious.

The weight of the ring on Sherry’s finger grew heavy and she took a step back. This was seriously the oddest prank ever invented. With three pairs of eyes watching her with varying degrees of interest, she said, “Honey, for real, I don’t know who your source is, but you got some facts confused.”

Though not nearly as much as Sherry wished.

“So this isn’t you and Tyler Blue outside the Love Me Tender Wedding Chapel two days ago?” She held up her cell phone displaying, in embarrassing full color, a picture of her and Tyler. Sherry was wearing that horrid veil, and he was in a ridiculous top hat.

Angelle’s jaw dropped in Sherry’s peripheral. The time for denial was over. Sighing, she admitted, “Okay, that is me, but that’s not…” Her head snapped back and she snatched the woman’s phone. “Hold on, what did you say his name was?”

“Tyler Blue,” she replied with a huge smile, glancing back at her cameraman. She gave him some sort of signal and he stepped forward—just as the ground under Sherry’s feet started to shift. “Lead singer of Blue, God’s gift to country music. And your new husband. Am I right?”

As a teen, Rachel Harris threw raging parties that shook her parents’ walls and created embarrassing fodder for future YA novels. As an adult, she reads and writes obsessively, rehashes said embarrassing fodder, and dreams up characters who become her own grown up version of imaginary friends.

She grew up in New Orleans, watching soap operas with her grandmother and staying up late sneak reading her mam's favorite romance novels. Now a Cajun cowgirl living in Houston, she still stays up too late reading her favorite romances, only now, she can do so openly. She firmly believes life's problems can be solved with a hot, powdered-sugar-coated beignet or a thick slice of king cake, and that screaming at strangers for cheap, plastic beads is acceptable behavior in certain situations.