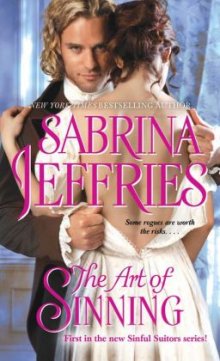 The Art of Sinning by Sabrina Jeffries - ARC Giveaway

Sabrina Jeffries releases the first book in her new The Sinful Suitors series in Mid July 2015.

The Art of Sinning - The Sinful Suitors, #1

The first novel in the Sinful Suitors series by New York Times bestselling author Sabrina Jeffries! At St. George’s Club, guardians conspire to keep their unattached sisters and wards out of the clutches of sinful suitors. Which works fine…except when the sinful suitors are members!

American artist Jeremy Keane refuses to return home and take over his father’s business. He’d much rather sample bevvies of beauties abroad, in search of a model for the provocative masterpiece he’s driven to paint. When he meets Lady Yvette Barlow at a London wedding, he realizes she’s perfect for his work—and determines to capture the young heiress’s defiant spirit and breathtaking sensuality on canvas.

No stranger to scandal, Yvette agrees to be Keane’s subject—in exchange for his help gaining entry to the city’s brothels he knows intimately, so she can track a missing woman and solve a family mystery. But when their practical partnership leads to lessons in the art of sinning, can they find a bold and lasting love?

By the time Sabrina Jeffries was eighteen, she'd eaten chicken heads and jellyfish, been chased by a baby elephant, seen countless cobras and pythons, had the entire series of rabies shots, and visited rain forests and rubber plantations. But that wasn't enough excitement for her; to escape her mundane life as a missionary's daughter, she read romance novels.