What Inspired Me to Write Paranormal Romance

The only way I know how to answer this is by splitting it into two separate questions:

Romance for few reasons. I’ve read shelf-loads of books that end tragically. Often for women. In so much of literature, the basic premise would seem to be that any woman (think, Anna Karenina, Hester Prynne, Effi Briest, Ophelia, Madame Bovary) with agency over her own heart and body must suffer.

Or, as Thomas Hardy had the good grace to put it, The Woman Pays.

I love romance because I know the minute I start reading that whatever the ups and downs and wherever the heroine bestows her heart and body, she’s not going to end up under a train.

I need my HEA, more so, now that I’ve known death and unhappiness first hand, and tragedy isn’t just a literary device.

Honestly, I also think it’s easier to plot. If you look up “Sagging Middle,” there are thousands of entries. They have nothing to do with Pilates and everything to do with that point in a novel where the novelty of the introduction has worn off, but the thrill of the climax is still a long way off. In romance, this is just about where you push your protagonists toward love or at least sex.

With romance, there’s just more to play with.

Same with paranormal. This world and other worlds are yours to play with. Anything you can imagine can happen.

I think there are two ways of defining the “para-“ of paranormal. One is beyond normal: completely and utterly alien. A world with two stars and purple skies and inhabitants who communicate telepathically while moving through the water on sentient suitcases.

Then the other is beside normal. A kind of cohabitation of the mundane with the fantastical. The real world with a big ‘what if’ added in.

Take the Iron Moon. This is what the Great North Pack calls the three days out of every 30 when they must be wolves. This shifting from skin to wolf is distinctly not of this world. Homeward, the app the Pack uses to make sure they get back to their Adirondack territory in time for that shift, is.

The hero of A Wolf Apart, Elijah Sorensson, relies on the app. He is what the Pack calls an Offlander, someone who lives primarily away from Homelands, coming back only for the Iron Moon.

A partner in the Manhattan law firm founded by Pack money in order to protect its interests, Elijah has risen to the top of the human hierarchy. This does not mean he is entirely human. He finds himself seduced by one woman because her raw wool poncho reminds him of mutton, while another’s vanilla perfume recalls the mouthwatering scent of a beaver’s castor gland.

Paranormal allows me to reimagine our world through different eyes. In this case, a wolf’s eyes.

One of my favorite parts of writing about the Great North Pack has been considering how they would train for their interactions with humans. They spend their early years wild, rarely changing into “skin.” Why would they? They are faster, warmer, have better senses, sharper teeth when they are wolves. They sleep together as pups in roiling, cozy mounds of fur.

It is not until the dreaded Year of First Shoes, when they leave pup-dom behind and must begin to learn how to, at least, act human. They would have to learn everything from how to hold a fork to how to shake a hand to how to communicate with words and how to wear clothes.

One of the most crucial lessons in Introduction to Human Behaviors is on the varieties of human deception. According to character Leonora Jeansdottir, the Human Behaviors teacher, there are eight: Joke, Advertisement, Falsehood, Flirtation, Exaggeration, White Lie, Irony, and Politics. (JAFFEWIP is the mnemonic they use to remember them.)

I even dummied up a quiz on the subject that Leonora sent to the Alpha as proof that Silver, the heroine of The Last Wolf was not fit to travel Offland.

Didn’t do anything with it; it was just fun.

Because there is so much to play with in paranormal romance that sometimes I don’t know when to stop!

Can a human truly make room in her heart for the Wild?

Thea Villalobos has long since given up trying to be what others expect of her. So in Elijah Sorensson she can see through the man of the world to a man who is passionate to the point of heartbreak. But something inside him is dying...

Elijah Sorensson has all kinds of outward success: bespoke suits, designer New York City apartment, women clamoring for his attention. Except Elijah despises the human life he's forced to endure. He's Alpha of his generation of the Great North Pack, and the wolf inside him will no longer be restrained...

She sizes me up quickly with eyes the color of ironwood and just as unyielding.

The winner is posted in the comments.

Maria Vale is a logophile and a bibliovore and a worrier about the world. Trained as a medievalist, she tries to shoehorn the language of Beowulf into things that don't really need it. She currently lives in New York with her husband, two sons and a long line of dead plants. No one will let her have a pet. 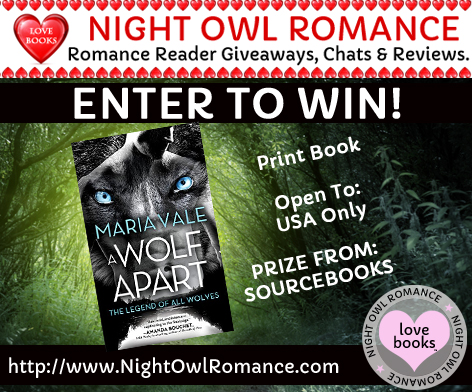