A Texas Kind of Christmas With Jodi Thomas and Friends

When I was a kid, Christmas was always climbing in the car, driving to Mema’s house for Christmas dinner.  Presents from Santa Claus traveled in the trunk.  Eight sets of uncles and aunts and more cousins than I could count.  We ate at noon and complained all afternoon that we were too full.

Now, all these years later, I’m the grandmother.  I’m called Gram.  With only two sons, two daughters-in-law and four grandchildren, a lot has changed but the traditions are still the same.

Thin cinnamon rolls, bite sized are served as an appetizer when you walk in the back door.  Gifts are dropped in the living room, coats tossed in the study and the fun begins.

As always everyone hangs out in the kitchen with the grandkids running through.  My grandmother always had a big dinner at noon but I serve an evening meal before we open presents.

In my family the evening meal was usually called supper.  Green chili enchiladas, jalapeno in the beans, fried rice, beef burritos covered in chili and cheese and tamales.  Toss out chips, hot sauce and sopapillas and you’ve got a Texas Christmas Supper.

Whatever you eat, wherever you live, I wish y’all a Merry Christmas and when the dishes are done and the company’s gone, I hope you’ll sit back, prop your feet up and read a good book, preferably A TEXAS KIND OF CHRISTMAS.

A Texas Kind of Christmas

It’s Christmas Eve, 1859, and everyone who’s anyone is headed to the glorious St. Nicholas Hotel for the most talked about ball of the season. It’s the kind of Texas night where anything can happen—even love . . .

To escape her stepmother’s plot to marry her off, Texas heiress Jacqueline Hartman spends Christmas Eve sharing a hideout with an accused bank robber. After a night in Nathaniel Ward’s arms, Jacqueline is certain she has met her match after all. But will his heartfelt promise of love lead to his demise at the hands of the law?

Seamstress Birdie Flanagan gets the surprise of her life when she receives a beautiful gown—and a sudden invitation—for the ball of the season! Birdie creates a stir from the moment she arrives, capturing the eye of the dashing Captain Douglas Newcastle.  But will a secret from her past keep her from her long-awaited happily-ever-after?

When lovely spinster Eugenie Charpentier makes a trip across the Texas frontier with former Texas Ranger Asher Graham, she dreams of an adventure, and the rough-and-tumble cowboy is happy to oblige. But both Eugenie and the rugged lawman are keeping secrets. Can they find each other—and love—on the dance floor at the Christmas ball?

The lucky Kindle copy winner of A Texas Kind of Christmas by Jodi Thomas is: Sandra Dufoe

New York Times and USA Today's bestselling author Jodi Thomas has published over 50 books and 15 short stories in both the historical romance and contemporary genres, the majority of which are set in her home state of Texas. Publishers Weekly calls her novels "Distinctive...Memorable," and that in her stories "[tension] rides high, mixed with humor and kisses more passionate than most full-on love scenes." In 2006, Romance Writers of America (RITA) inducted Thomas into the RWA Hall of Fame for winning her third RITA for THE TEXAN'S REWARD. She also received the National Readers' Choice Award in 2009 for TWISTED CREEK (2008) and TALL, DARK, AND TEXAN (2008). Thomas served  as Writer in Residence at the West Texas A&M University campus for 16 years, where she inspired students and alumni in their own writing pursuits. 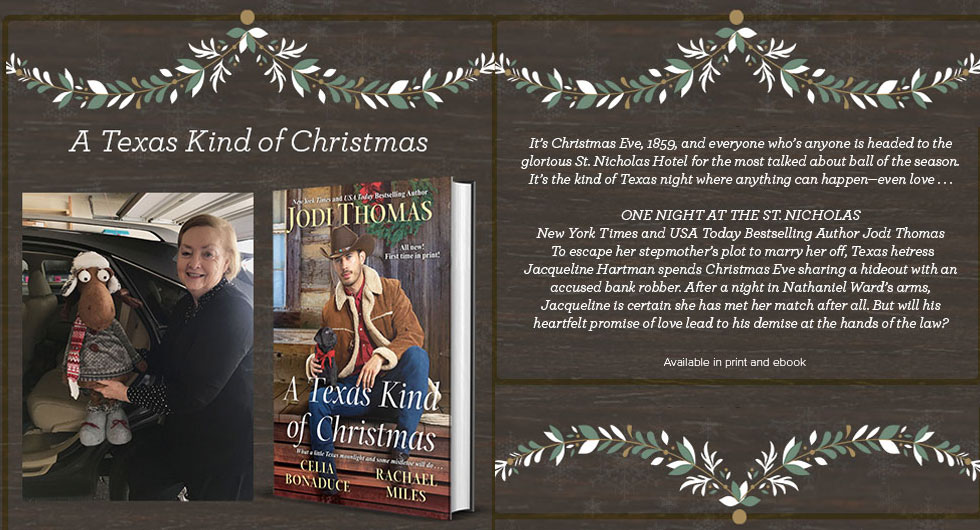